Overview:
Rick and his group are heading back to Alexandria as fast as they can.  The horn isn’t stopping, so it’s drawing more and more walkers.  Daryl wants to help but Rick wants him to stick to the plan.  The rest of the walkers need to be lured away.  Rick plans to take the RV and go ahead.  He’ll use the RV to block the herd of walkers. Glenn, Michonne, Nicholas, Heath, David, Sturgess and Annie will keep going to help the people of Alexandria.  Before he leaves, he pulls Michonne and Glenn to the side.  He tells them to keep an eye out on the rest of the group.  If necessary, they should leave them behind.  Rick knows that sometimes you must make tough decisions to survive. 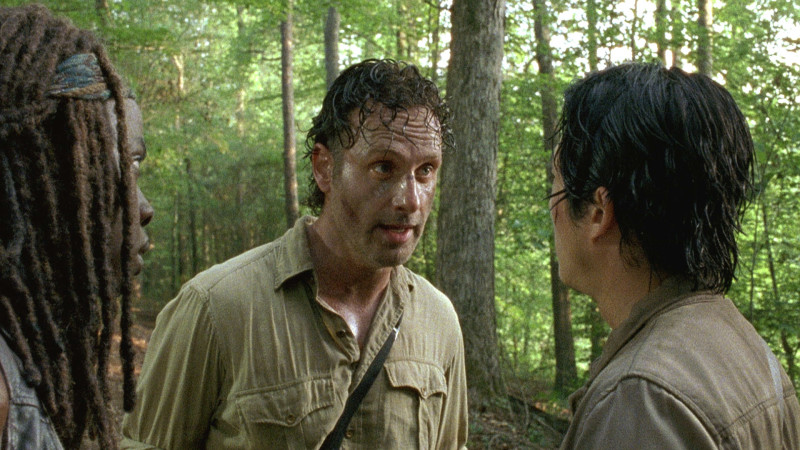 Up ahead, Glenn spots a group of walkers.  He orders everyone not to shoot unless necessary.  He and Michonne start taking them out using blades.  Sturgess pulls out his gun and starts blasting.  One round hits Scott  in the leg.  Sturgess runs off as the rest fight off the walkers.  It’s clear until a lone walker sneaks up and bites David.  David knows what’ll happen to him later.  For now, he insists that they keep moving.

The group continues down the road.  Annie wants to stop to treat everyone’s wounds.  Glenn agrees but knows they need to find shelter.  They soon arrive in a small town.  Nicholas has been there before on a supply run.  He guides them to an abandoned pet store.  It appears that there’s no walkers inside so they can rest.  Michonne knows the group is tired and won’t be able to fight off the walkers.  Glenn comes up with an idea to set some buildings on fire.  The fire will distract the oncoming herd and any more walkers.  They can use that distraction to escape.  Glenn and Nicholas take off to start the fire and lure the walkers away.

Michonne and the others stay in the store.  She knows that if they stay quiet, the walkers will move along.  David writes a note for his wife.  Heath overheard what Rick said.  He doesn’t know if he should trust Michonne.  He’s afraid she’ll leave them first chance she gets.  She tells Heath that she won’t leave them.  The safety is ruined after Michonne hears banging from somewhere in the store.  She opens a door to find two walkers.  During the fight, the walkers are drawn to the noise.  The herd arrives shortly after.  There’s no other choice, they have to leave now. 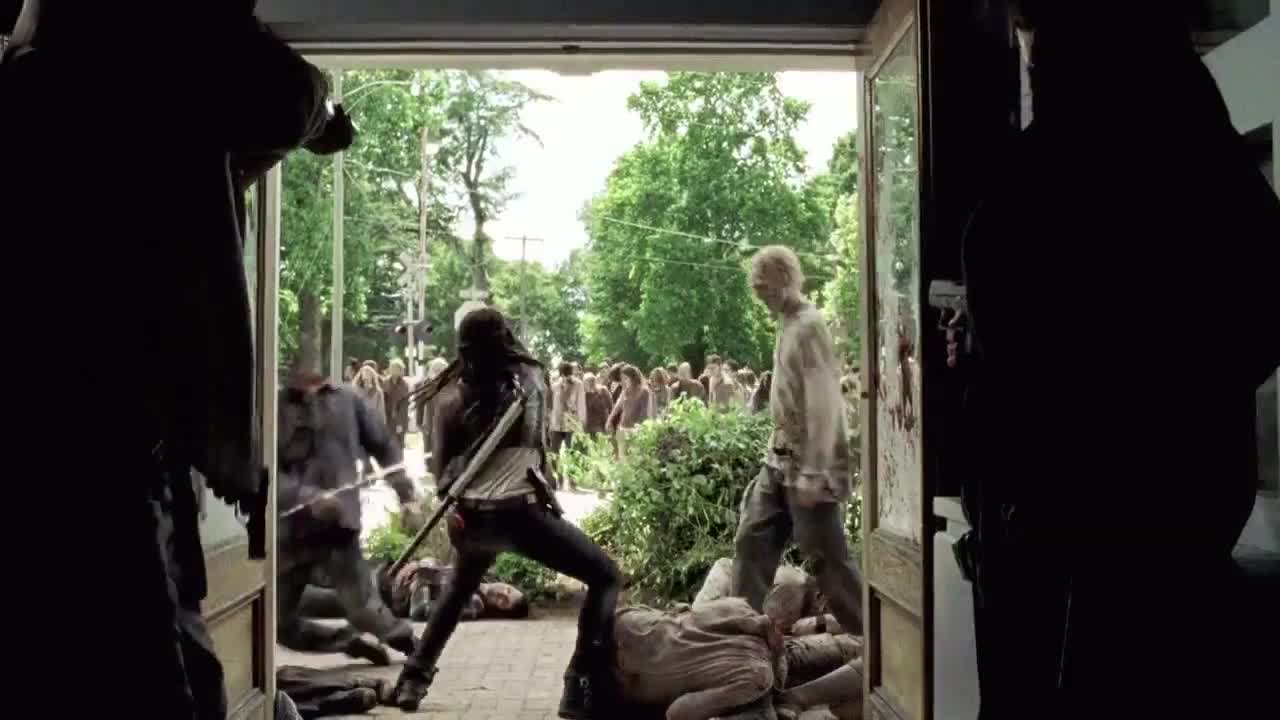 Michonne leads the charge as they fight their way out.  Annie falls down and is devoured by walkers.  The others make their way through the town.  There’s walkers coming at them from every direction.  Michonne spots an alley and they head down it.  At the end, there’s a fence they can climb over.  Heath and Scott make it over the fence.  Michonne and David are both stuck.  Heath pulls out his gun and starts blasting walkers.  Michonne finally makes it over.  David is pulled off the fence and eaten.

Glenn and Nicholas have no choice but to run down an alley.  They make a brave stand against the approaching walkers.  They’re backed into a corner, continuing the fight.  They both climb on top of a dumpster as the walkers swarm around them.  Nicholas becomes paralyzed with fear as the walkers desperately grab at them.  Nicholas turns to Glenn and shoots himself.  He falls toward Glenn, causing them both to fall off the dumpster.  Glenn can only watch as the walkers begin to swarm over him. 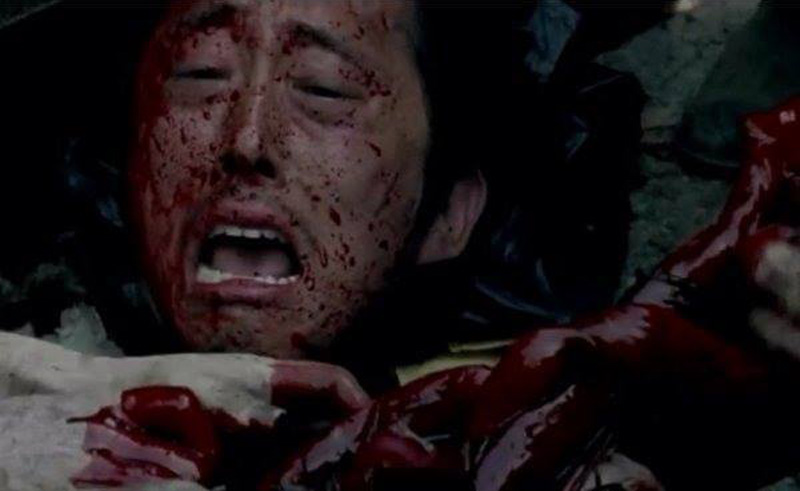 Rick is driving the RV as fast as he can.  He can’t reach Glenn on the radio.  He’s able to get Daryl, Sasha and Abraham.  He soon hears gunfire coming from Alexandria.  He orders everyone to stick with the original plan.  He knows the people back home can handle themselves.  The herd of walkers need to be dealt with now.  Rick takes a moment to catch his breath when two wolves enter the RV and tries to attack him.  He manages takes them both out.  As he searches the bodies, several more wolves surround the RV.  Rick snatches up an AK-47 and kills the rest.  He tries to start the RV but it stalls.  The situation becomes worse when walkers start to pour out of the forest around him.  The herd is here and Rick has nowhere to go.

Quotes:
Rick: If something’s in front of you, you kill it.  No waiting, no hiding.  You keep going.

Michonne: We’re going to catch up with a lot of things and we’re going to end them.  We have no choice.  We got to keep going forward.

Michonne: (noticing David is in pain) Can I take a look?
David: Please?
(Michonne (looks at the bite)
David: Is it bad?
Michonne: It’s about what you’d expect.

Impression:
This episode is setting up for what’s coming next.  From the previus episode, we know what’s happening in Alexandria.  The wolves may be gone, yet the walkers are on their way.  Rick and the others are trying to get home to help.  Rick knows that if the walkers get to Alexandria, everything will be lost.  He knows they have to deal with the situation in front of them.  The citizens will have to fend for themselves.  The plan needs to finish to make sure everyone stays safe.

Glenn’s fate is uncertain.  I think the walkers were actually eating Nicholas.  Glenn is smart and resourceful.  I have a feeling he’ll find a way out of this.  Glenn is one of my favorite characters.  I hope he survives to see Maggie and his friends again.  Rick is also in a dangerous situation.  The walkers have surrounded the RV.  Abraham and the others are too far away to help.  I do have a feeling Daryl will show up to help.  This season isn’t giving our heroes a break.  For every one problem they fix, another challenge shows up.