Overview:
Morgan is talking to someone in his home.  It’s the Wolf that attacked him.  He’s going to tell him how he got to Alexandria.  Morgan has become unstable.  One night, he went on a rant as his shelter caught fire.  He armed himself and made his way through the woods.  He cleared any area of walkers.  Morgan stayed in isolation.  One day, while on patrol, he came across two men.  Morgan saw them as a potential threat and killed them both. Morgan is determined to eliminate anyone he sees as a threat. 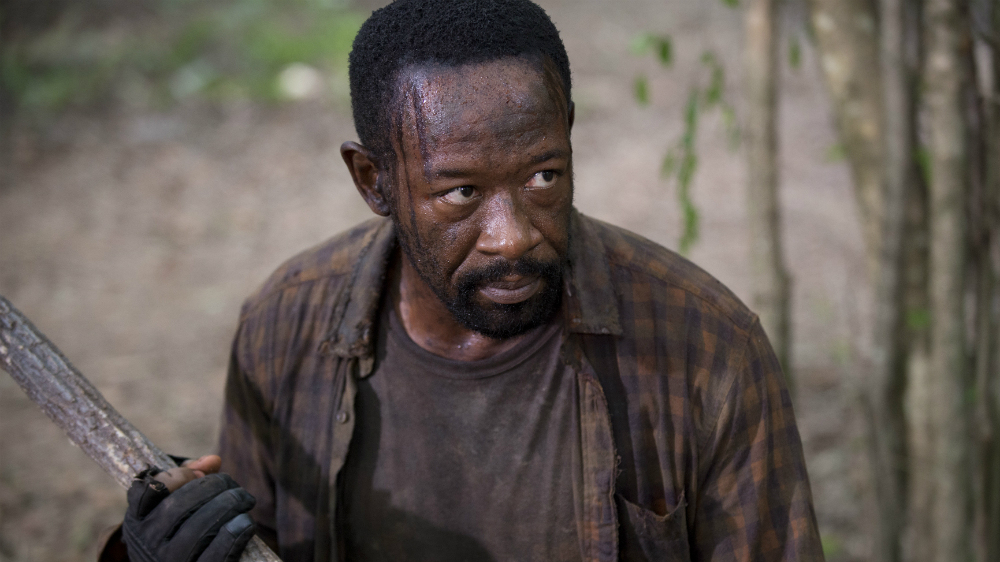 Morgan continues to explore the forest.  After hearing a goat, he follows the sound to a cabin.  As he approaches the goat, a man calls out to him.  The man asks Morgan not to steal the goat and even offers to feed him.  Morgan ignored the greeting and continues to explore the cabin.  He has his rifle at the ready, waiting for a threat.  The stranger sneaks up on Morgan and knocks him out.

Morgan wakes up in a cell.  The man introduces himself as Eastman.  He’s from Atlanta and was a Forensic Psychiatrist.  He seems nice enough and wants to know about Morgan.  Morgan isn’t forthcoming and will only say he ‘clears.’  Morgan refuses to talk to Eastman.  At one point, Eastman opens the cage door and gives Morgan a choice.  He can leave or he can stay.  Morgan steps out of the cage and attacks Eastman.  Using Aikido, Eastman is able to subdue Morgan.  He won’t kill Morgan.  Eastman suggests they could leave the cabin together.  He wants to see what else is out there.  They can’t leave just yet.  They need to find supplies.  Until then, Eastman trains Morgan in the philosophy and execution of Aikido. 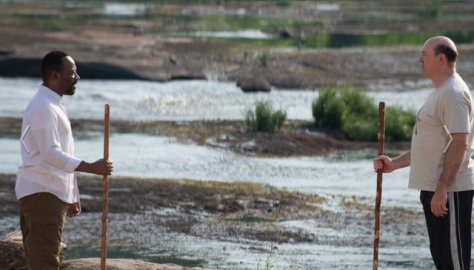 One night over dinner, Eastman explains why he has a cell in his cabin.  Crighton Dallas Wilton was a prisoner Eastman evaluated for the state.  Wilton was a model prisoner, yet Eastman saw right through him.  Because of Eastman, WIlton’s parole was denied.  Wilton broke out and killed Eastman’s family.  Wilton turned himself in and was able to work the roads planting flowers.  Eastman was able to track down Wilton and brought him to the cabin.  He left him in that cage for 47 days until Wilton starved to death.  Eastman tried to turn himself in but the world had already ended.

Eastman and Morgan decide to make the trip.  They head back to Morgan’s camp site to get the last items.  A lone walker emerges from the woods.  It’s one of the men Morgan killed.  He can’t bring himself to attack the walker.  Eastman steps in to save Morgan and gets bit by the walker.  Morgan wanted the walker to kill him and is furious at Eastman for saving his life. 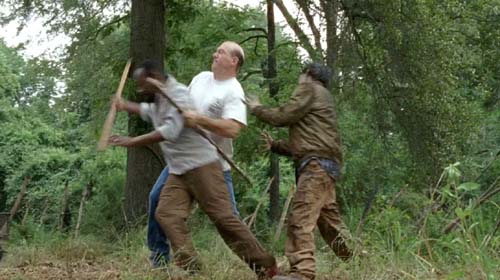 Morgan stays and helps Eastman.  He’s fading fast, yet he offers Morgan to stay at the cabin.  Before Eastman decides to end his own life, he offers Morgan to stay at the cabin.  Morgan has decided to leave and helps Eastman outside.  Morgan then takes his things and leaves the cabin.  He eventually makes it to Terminus then Alexandria.  The Wolf seems intrigued by Morgan’s story.  He shows Morgan a wound that’s become infected.  He tells Morgan if he doesn’t die from the injury, he’ll kill Morgan and everyone else.  Morgan leaves the home, refusing to kill the man.  Suddenly, he hears Rick scream to open the gate.  Morgan heads to the gate knowing something has gone terribly wrong.

Quotes:
Eastman: We’re not built to kill.  We don’t have fangs, claws or armor.  Vets that came back with PTSD, that didn’t happen because we’re comfortable with killing.  We’re not.  We can’t be.  We feel, we’re connected.

Eastman: I have come to believe that all life is precious.

Wolf: So I know I’m probably going to die.  If I don’t, I am going to have to kill you Morgan.  I’m going to have to kill every person here, every one of them.  The children too.  Just like your friend Eastman’s children.  Those are the rules.  That’s my code.  I’d say I’m sorry, but you said it, right?  Don’t ever be sorry.

Impression:
At first glance, this seemed like a filler episode.  It was more than that.  It showed us a rare glimpse into Morgan.  This man was a mystery from the start.  We got a chance to see his past.  We learned how Eastman was able to reach him and bring him back from madness.  Eastman was a great character.  I wish he could’ve met Rick and the others.

I have no idea what Morgan has in store for his prisoner.  I have a feeling he’ll try and help him like Eastman helped Morgan.  But this man seems like pure evil.  I don’t think Morgan can help him.  We heard Rick scream for the gates to be opened.  The plan has backfired so now the citizens of Alexandria have to fight.