Overview:
Daryl, Sasha and Abraham are almost done with their mission.  They’re tired and eager to get back home.  Just as the end is in sight, the three are under attack.  Gunmen appear out of nowhere and open fire.  Daryl falls off his bike and is separated.  Two cars appear and chase him.  Another car emerges and chases Abraham and Sasha.  Abraham and Sasha are able to take out their pursuers.  Daryl is chased off into the woods.  He collapses from exhaustion.  After taking a few moments to recover, Daryl takes in his surroundings.  He tries to reach Sasha and Abraham on the radio.  He gets no response so now he’s on his own.  Daryl is shocked to find burnt remains.  He soon comes across two women, Tina and Honey.  Before Daryl can talk to them, he’s attacked from behind and knocked unconscious. 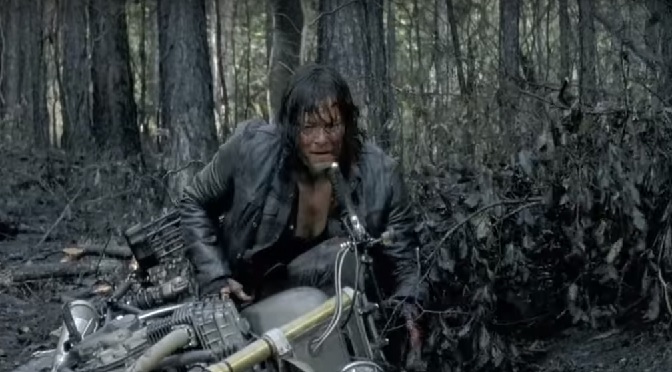 When he comes to, Daryl finds that he’s tied up and being held at gunpoint by a man, D.  They march him through the forest.  D reveals that the burnt bodies were walkers they burned.  D goes on to explain that the three have been fighting the walkers since it started. The group soon come to a truck yard.  D is looking for ‘Patty.’ Tina suggests they turn themselves in.  She faints shortly after, causing Daryl to make a break for it.  He snatches the trio’s backpack with him.  After running a while, he stops to inspect the pack.  He sees a cooler full of insulin inside.

Sasha and Abraham backtrack to see if they can find Daryl.  Abraham wonders who the gunmen were looking for.  He wonders if maybe the three of them came across a trap meant for someone else.  They both decide to look for Daryl as Sasha leaves clues for Daryl to follow.  They soon take refuge in an abandoned office.  Abraham volunteers to take watch while Sasha gets some sleep.  Sasha can’t sleep so she and Abraham have a heart to heart talk.  Abraham thinks Sasha doesn’t really want to live.  Sasha thinks Abraham needs the constant threat of danger to feel alive.  She warns him that he’s always accountable for his actions.

Daryl comes across D, Tina and Honey.  He orders D to hand over the gun.  Daryl gives the insulin back.  A truck appears and some armed men climb out. The leader, Wade, calls out to the group.  He orders D, Tina and Honey to come back with them.  Daryl helps them hide.  He creates a trap causing one of Wade’s men to get bit by a walker.  Wade comes and cuts off the man’s arm.  Wade then calls off the search claiming ‘He only wants ass that’s willing.’  Daryl, D, Tina and Honey are safe for now.

Dawn breaks as Abraham decides to go out and explore.  He spots a walker stuck on a metal police, dangling over the edge of a roof.  The walker has a RPG launcher across its back.  Abraham soon finds a box of cigars and some spare rockets for the launcher on the back of a truck.  Abraham tries to get the launcher as the walker tries to bite him.  Abraham gives up realizing Sasha has a point.  He really does need to find danger to feel alive.  He meets back with Sasha and compliments her on her honesty.  Abraham tells Sasha that he wants to get to know her better.  Sasha warms to the idea on the condition that Abraham works on his issues. 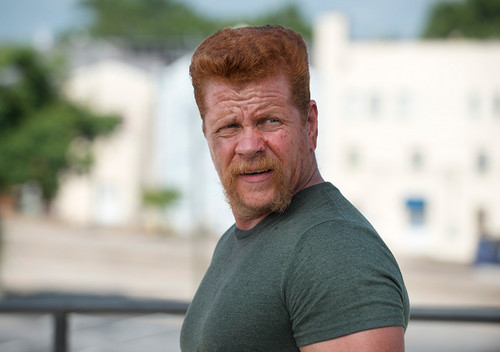 Daryl and his new team continue their journey.  D tells Daryl that he’s been with Tina and Honey since the beginning of the outbreak.  The group they were with seemed okay at first.  Then they changed as the world changed for the worst.  The group then finds a greenhouse destroyed by fire.  Inside, Tina finds two bodies covered in melted glass.  As she kneels to place flowers on the bodies, one of the bodies comes to.  Tina screams and falls to the ground.  The walkers attack her as Honey rushes to help.  They’re too late as Honey cries and apologizes to Tina.  As D and Daryl begin to bury Tina, Daryl asks him how many walkers and people he’s killed.  D’s killed a couple dozen of walkers but refuses to kill people.  Daryl offers D and Tina to come with him back to Alexandria.  D holds Daryl at gunpoint and steals his bike.  After they leave, Daryl finds a truck.  He is able to find Sasha and Abraham and they head back home.  Daryl tries one last time to reach Rick on the radio.  He hears a voice come over the radio:
‘Help.’

D: We knock you over the head, tie you up, threaten to kill you…why in the hell did you come back?
Daryl: Maybe I’m stupid, too.

Impression:
The writers are clearly dragging out the suspense as long as they can.  They’re switching the focus between Rick and Alexandria, as well as the other survivors.  In this episode, we’ve seen what Daryl and the others had to endure.  Daryl was willing to help out the trio even though they tried to kill him.  Sasha and Abraham got to know each other a little better.  I’m not sure if they’re going to end up a couple.

We still haven’t heard any news about Glenn.  His fate is still up in the air.  I’m clinging to the hope that he’s still alive.  I hope the writers come up with a great story about Glenn’s fate.  They’ve left us in the dark this long, so the pay off better be worth it.  Another mystery is who is in charge of the raiders.  One of them hinted that the leader ‘wants ass that is willing.’  This season may be a little slow but it’s creating mysteries left and right.  I just hope all this suspense pays off.