Overview:
Glenn emerges from underneath the dumpster.  After Nicholas shot himself, Glenn was able to crawl under it and hide there until the walkers left.  He has no more ammo and no more water left.  All seems lost until Enid appeares and tosses him a bottle of water.  He follows her to an  abandoned shop.  Enid offers him some more water then tells him to go.  When Glenn asks her about Alexandria, she’s won’t give him any answers except ‘People died.’  Glenn needs to know if Maggie is okay, so he chases her outside.  Enid runs off and Glenn follows her, eager to find answers. 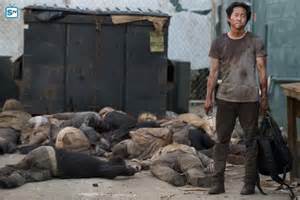 Glenn continues to make his way home.  He finds David, now a walker, near the fence.  Glenn finishes him off then finds the note David wrote for his wife.  Meanwhile in Alexandria, Rick and Carl are training Ron to handle a gun.  Ron wants to practice shooting but Rick doesn’t want to alert the walkers.  He also wants to save as much ammo as possible.

Rick decides it’s time to talk to Morgan.  Rick, Carol and Michonne sit down with Morgan.  Rick recounts how some of the Wolves attacked him at the RV.  He also reveals that Carol saw Morgan fighting some of the Wolves.  Rick and Carol want to know if Morgan let any of them go.  Morgan tells them the truth that he didn’t want to kill those people.  He changed and he feels that people can change.  He knows that because he points out that Rick, Carol and Michonne have changed.  Michonne thinks that sometimes you have to kill to survive.

Rick lays out his plan with Michonne.  It’ll be just like the previous one.  Michonne is on-board and eager to help.  Deanna approaches and hands Rick the blueprints she’s been working on.  She wants to rebuild Alexandria because she knows everything will work out.  She knows they will survive to rebuild their home.

Meanwhile, Rosita is giving some of the residents combat training.  Eugene is scared to die and is distracted by the walkers.  Rosita points out that dying is easy.  The hard part is letting your loved ones die because you weren’t strong enough or willing to fight to protect them.  Eugene is stung by her words and walks away. 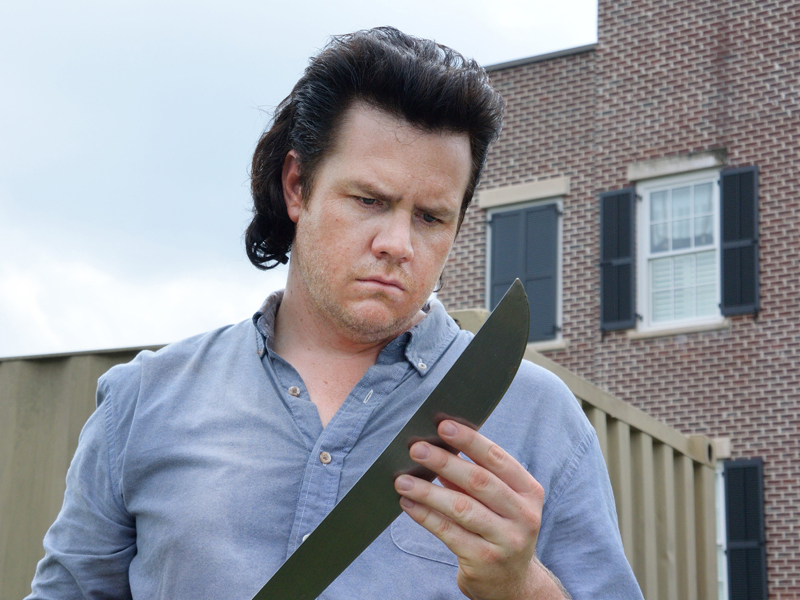 Enid is ready to leave.  Just as she’s about to walk out the door, Glenn grabs her and pulls her back inside.  He wants to head back and help defend Alexandria.  Enid refuses to go and Glenn refuses to leave her there.  When he tries to take her with him, she pulls a gun on gun.  Glenn disarms her and tells her half the herd is heading to Alexandria.  She finally agrees and Glenn suggests she lead the way.  When they reach Alexandria, Glenn and Enid see that it’s completely surrounded by walkers.

Rick faces yet another problem.  Spencer is trying to shimmy across a rope so he can get outside.  As he reaches the halfway point, the rope starts to give.  Tara springs into action as she starts shooting some of the walkers.  Rick, Morgan and Tobin are able to pull Spencer up to safety.  Rick is furious that Spencer didn’t run the plan by him first.

Morgan stops by the clinic and talks to Denise.  He wants to know how to spot an infection and if antibiotics will work.  He doesn’t want to waste any medical supplies.  Denise gently probes and Morgan reveals the medicine isn’t for him.  Later, Carol sees Denise follow Morgan to his home.  She asks Jessie to look after Judith.  As Carol tries to sneak into his house, Morgan catches her.  She demands to know who he’s keeping in his home.

Rick apologizes to Tara for screaming at her.  She realizes what Spencer tried to do was stupid.  The reason she tried to help him is they’re part of a community and they need to help each other.  Deanna comes to thank both Rick and Tara for saving Spencer.  Maggie spots some green balloons appear in the distance.  She happily points out that they came from Glenn which means he’s alive.  The joy is turned to terror when the main watchtower falls down, taking down a large part of the perimeter fence. 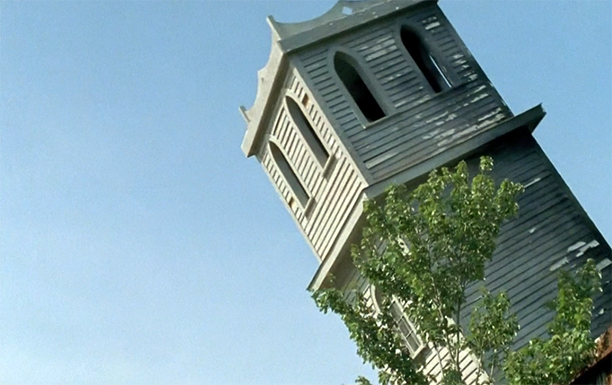 Quotes:
Rick: When we go out there, it’s never easy, it’s never simple.  It’s always a fight.   But we’ve come back from harder things.  From further away.  Glenn, Daryl, Abraham, and Sasha, they will too.

Enid: (after Glenn disarms her and takes away her gun) Asshole.
Glenn: You pull a gun on me and I’m the asshole?

Enid: The world is trying to die.  We’re supposed to just let it.

Impression:
Don’t get me wrong, I’m glad Glenn is alive.  I do find it hard to believe that he survived by hiding under the dumpster.  I think it would’ve been more exciting to have him taken hostage by the Wolves.  Then again, Glenn was already taken hostage back in Season 1.  I was hoping that Daryl, Abraham and Sasha would’ve come to Glenn’s rescue.

The pacing of this season seems off.  I think it would’ve worked better if the walkers came into Alexandria during the Wolf attack.  I’m confused as why the watch tower collapsed now.  I know it was badly damaged after being hit by the truck.  I was sure a Wolf was hiding in the tower, ready set to spring a trap.  Despite my complaints, I liked this episode.  This season has had its problems.  I’m sure the rest of the season will keep us all entertained.