Overview:
The wall is down and walkers are pouring in. Rick orders everyone to get inside their houses.  Morgan and Carol are able to get inside Morgan’s house.  Maggie is cornered but able to climb up into one of the towers.  Rick and Deanna fight their way through the town.  Deanna is wounded and Rick struggles to help her and fight the walkers.  Michonne, Carol, Gabriel and Ron join in the fight.  They’re cut off just as Jessie comes to the rescue.  They follow to her house.  As they get inside, Michonne takes a look at Deanna’s leg.  She then discovers that Deanna’s been bitten by a walker.  Rick then reveals to Jessie his plan is to draw the walkers away from the town.  He vonunteers to go alone and lure the walkers away from Alexandria. 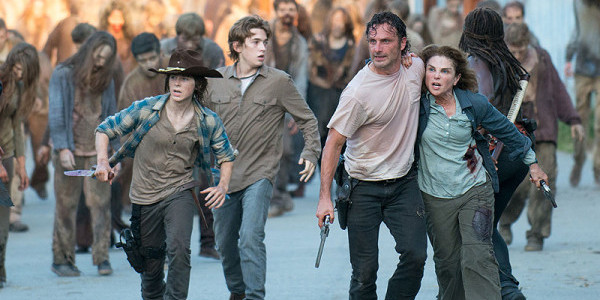 Carl notices Ron sneak into the garage.  Ron is scared that everyone is going to die.  As Carl tries to calm him down, Ron pulls a gun and a fight breaks out.  The nearby walkers are drawn to the fight and descend upon the house. They scramble to find tools and weapons.  Rick hears Judith start to cry and goes to calm her down.  He soon finds Deanna standing over Judith.  Rick prepares to attack, only to realize Deanna hasn’t turned yet.  She tells Rick that her people are his people now.  That’s why she went to help him.

Meanwhile, Morgan takes a look at Carol.  He’s worried she might have a concussion.  Carol isn’t quite ready to let her defense down around Morgan.  Morgan assures her that things will calm down, but for right now, they have to worry about surviving first.  In the basement, Denise is talking to the Wolf.  He mentions that he got his wound by cutting himself on a rusty bumper.  Denise takes a look at his injury.  Carol appears, knife at the ready.  She knows the Wolf is dangerous and can’t be trusted.  Morgan stands between Carol and the Wolf.  He refuses to let her kill him and a fight breaks out.  Morgan has no choice but to knock out Carol.  The wolf sneaks up behind Morgan and knocks him out.  As the Wolf takes Denise hostage, Eugene, Tara and Rosita come to the rescue.  The wolf takes Denise out of the house.  Neither Tara or Rosita want to shoot him, afraid of hitting Denise.

Deanna’s house is overrun.  More walkers are on the way so everyone has to act fast.  Rick plans out for everyone to cover themselves in blood and guts from the walkers.  They’ll head to the armory and use the guns there to fight off the walkers. The guts from the walkers will make it possible to go through town undetected.  Rick takes the lead with Jessie, Sam and Ron in the back.  They make it out of the house.  Sam softly calls out for his mom.  He calls out louder as the walkers begin to snarl. 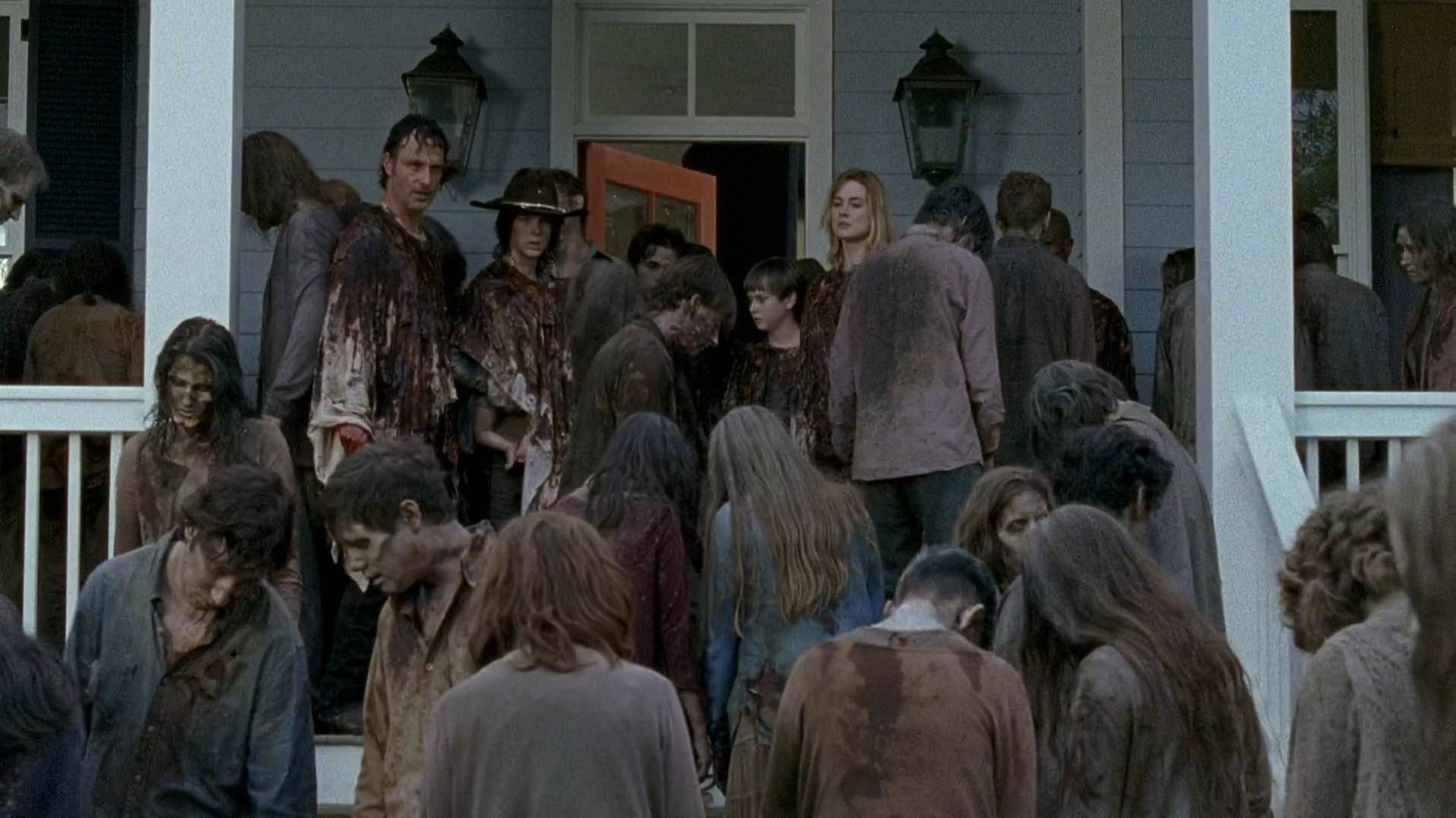 In a post credit scene, Daryl, Sasha and Abraham are stopped by a group of men on motorcycles.  They’re armed and not afraid to kill anyone who defies them.  One of the bikers demand the trio hand over everything,  He informs them that all of their weapons, ammunition, food and personal belongings belong to their leader, Negan.

Quotes:
Morgan: You don’t trust anybody, do you?
Carol: Some more than others.  But you’re dead last.
Morgan: Well, at least we’re being honest.

Michonne: Thank you.
Deanna: For what?
Michonne: For believing.

Deanna: Dolor hic tibi proderit olim.  ‘Some day this pain will be useful to you.’

Impression:
The danger has increased and the risk is more intense.  The walkers are now inside Alexandria.  The people can hide in their homes for now.  Rick had a good plan until that little turd Sam screwed it up.  I know he’s a kid and I shouldn’t be too hard on him.  Seriously, that was the worst time for the kid to have a meltdown.  People are going to die now because of that.

The bonus scene was damn cool.  I wish Negan would’ve shown up though.  His people are heavily armed and dangerous.  I wonder if Negan’s people will actually come to Alexandria’s rescue.  I doubt it’ll be out of the goodness of their hearts.  It might be an ‘accidental act of kindness.’  Negan and his people might save Alexandria only so they can use it for themselves.