Overview:
Daryl, Sasha and Abraham are on their way home.  The drive is cut short when they’re stopped by a group of bikers.  The bikers are heavily armed and aren’t looking to make friends.  The leader orders them out of truck and to surrender their weapons.  The bikers want to follow the trio back home.  The leader orders one of his men, T, to follow Daryl to the back of the truck to see what valuables they have.  The leader then pulls out a gun and threatens to shoot Abraham.  Sasha begs him not to shoot.  The leader pulls out a second gun and is about to shoot when all the bikers are killed by an explosion.  Daryl steps out from behind the truck, holding a smoking rocket launcher. 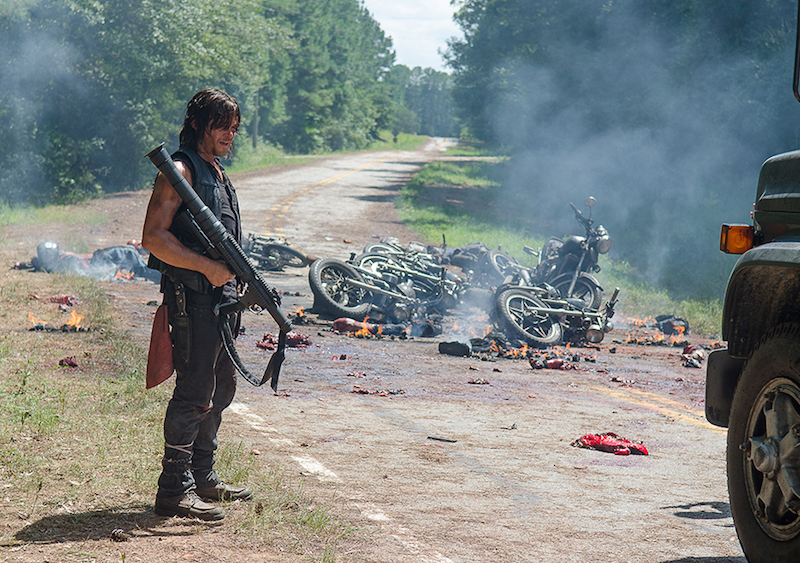 The original plan won’t work.  The walkers are too spread out.  The path to the armory is cut off.  Rick changes his mind and wants to get to the quarry.  They’ll take the cars there and lure the walkers away.  Gabriel offers to take Judith and keep her safe until Rick returns.  Gabriel takes Judith to his church while Rick and his group continue to make their way through Alexandria.  The walkers have them surrounded so they have to be extra careful.

Sam becomes afraid when he sees a young boy, who’s now a walker.  He’s paralyzed with fear as the group tries to get him to keep going.  Sam breaks down crying, whimpering as walkers close in on him.  They soon attack him as Sam cries for his mom.  Jessie screams in terror then is attacked by walkers as well.  Rick breaks down as he watches someone he cares about die in front of him.  As she’s eaten, she clings to  Carl’s hand.  Carl’s cries bring Rick back.  He draw his ax  and cuts off Jesse’s hand to save Carl.  Ron picks up a gun and aims it at Rick and Carl.  Before he can fire, Michonne runs him through with her sword.  A shot goes off and hits Carl in the face.  He stares at Rick in shock.  Rick rushes to him and catches him.  The element of surprise is gone.  Michonne takes the lead as Rick carries Carl and they run.

Glenn and Enid make it to the church.  Glenn looks for weapons, ammo and supplies.  He’s also looking for anything to help Maggie climb down from the tower.  Enid wants to help him.  No matter what Glenn says, she’s adamant about staying with him.  Glenn and Enid make it to Maggie.  Enid climbs up to help Maggie while Glenn draws the walkers away.  Glenn is quickly surrounded and is boxed in.  Just as the walkers are closing in, gunfire rings out and takes out most of the walkers.  It’s Sasha and Abrham.  They both cover Glenn so he can open the gate and let Daryl drive the truck through.

Denise and The Wolf are hiding while they make a plan.  The Wolf wants to run to a guard tower and jump over the wall.  He guides Dense through the walkers.  A walker is about to attack Denise when the Wolf comes to her defense.  He kills the walker but is bitten by another one.  Denise promises to take him to the clinic and save his life.  She binds his arm with her belt.  They get closer to the clinic, when a gunshot rings out.  The Wolf is hit.  Carol appears from above and yells at Denise to run.  The Wolf throws himself at the walkers, giving Denise time to escape.

She makes it to the clinic where Heath, Aaron and Spencer are waiting.  She looks out the window to see Rick, Carl and Michonne heading her way.  She quickly lets them in and prepares to take care of Carl.  Rick places Carl on the gurney as Denise tends to his wound.  Rick snaps and goes outside to go on a killing spree.  Michonne, Heath and Spencer join the fight. Some of the reisdents see the fight and join in.  They’re done being afraid and they’re willing to fight to take back their home.  The fight is long and everyone joins in.  It takes a while but the walkers are dead.  The battle is over and for now, the town is safe.

The next morning, everyone is weary after the battle.  They’re gathered outside the clinic, waiting on word about Carl’s condition.  Rick sits by Carl’s bedside.  He tells Carl that the new world will be better.  The people of Alexandria showed him that people can be stronger, the world can survive.  Rick wants to show Carl this new world.  Carl reaches for Rick’s hand and squeezes it. 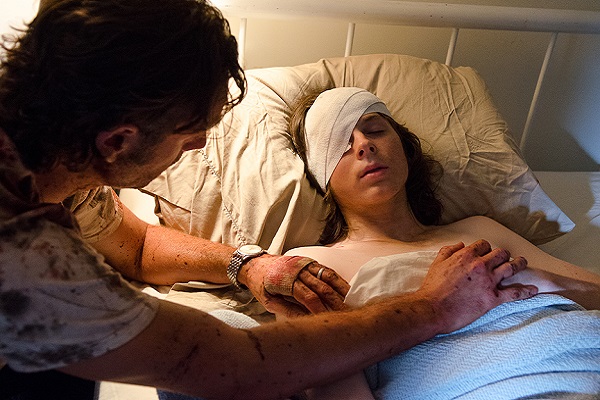 Quotes:
Gabriel: We’ve been praying..together.  Praying that God will save our town.  Well, our prayers have been answered.  God will save Alexandria because God has given us the courage to save it ourselves.

Glenn: People you love they made you who you are.  They’re still part of you.  If you stop being you, that last bit of them that’s still inside, who you are, it’s gone.
Enid: Who are those people to you?
Glenn: My parents.  A man named Dale.  Maggie’s father, Hershel.  A woman named Andrea.  A man named Tyreese.  Who are they to you?
Enid: My parents.
Glenn: Then they’re still here because you’re still here.

Rick: I was wrong.  I thought after living behind these walls for so long that maybe they couldn’t learn.  But today I saw what they could do, what we could do, if we work together.  We’ll rebuild the walls.  We’ll expand the walls.  There will be more.  There’s gotta be more.  Everything Deanna was talking about is possible.  It’s all possible.  I see that now.  When I was them, when it was over, when I knew we had this place again, I had this feeling.  It took me a while to remember what it was because I haven’t felt it since before I woke up in that hospital bed.  I want to show you the new world, Carl.  I want to make it a reality for you.  Please, Carl let me show you.  Please son, don’t die.

Impression:
A great way to start the next half of the season.  We saw three characters die in a brutal way.  I feel bad about calling Sam a turd in the previous recap.  Yes, that kid was annoying.  Then again, he was just a kid.  He was a kid who lost his dad, was terrified of being eaten by monsters and terrified of losing anyone else he cared about.  He was a kid that was traumatized by this scary, new world.  He didn’t deserve to die like that.

I wonder what’s going to happen to Alexandria now.  It seems like it’s being rebuilt.  Those bikers that tried to kill Daryl, Sasha and Abraham were vicious.  There was mention of their leader.  He mentioned the name ‘Negan.’  I don’t think Negan will be too happy when he learns what happened to his men.  Things are safe for now.  We all know how long happiness and safety last in this show.  Readers, what are you expecting to see in the last half of the season?