"I have come here to kick ass and chew bubble gum… and I'm all out of bubble gum." 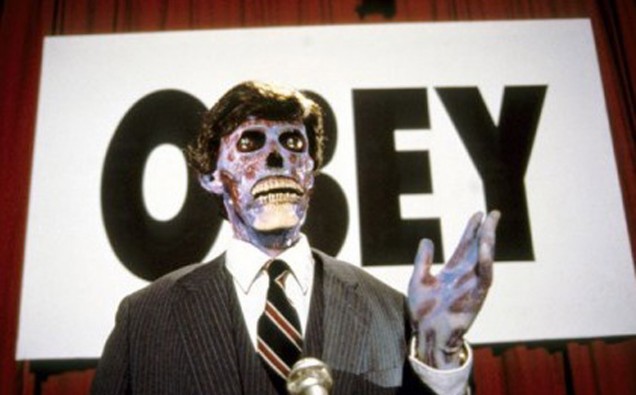 One of the nice things about writing for a newer horror website is not everything is covered, there isn’t a massive back log about “old movies” that might be more relevant to outright old school cinephiles. Even nicer is I get the opportunity to write about some of my favorite films. I mean I “enjoy” reviewing motion pictures but being able to write about the movies you love is a real treat. Sadly I am writing this just a few weeks after the star of the film died.

“They Live” is pretty an all-around slam dunk as a film. In fact I have yet to meet anyone who has thought like wise. If you meet this person they are saying nasty things about the film for attention. Nada starts off his day homeless and looking for work on the streets of Los Angeles. One day he steals a box of sunglasses from a church that looks like a front for something, he puts the sun glasses on and realizes… They colorized the world, they have been pumping us full of subliminal messages and they live among us.

So in the 80’s everybody “loved” wrestling and Hulk Hogan was not a washed up racist leather bag that he is today but was champion of the ring that told kids to take their vitamins alongside Mr. T. Every wrestling hero needs his heel and who was the Hulk’s? Roderick Tooms a.k.a. Roddy Piper, who John Carpenter “discovered” after seeing him in a match, but Roddy had done some movies and TV before “They Live” including the post-apocalyptic romp “Hell Comes to Frog Town,” Which also starts Rory Calhoun -1950’s character actor but if you’re a horror fan you best know him as Farmer Vincent from “Motel Hell” why: “Because meat’s meat and man’s gotta eat.” Honestly, I think a casting agent sent Carpenter to the ‘rassl’n match -I mean “They Live” is a bit of a conspiracy theory film, so I might as well drop some theories of my own.

Wearing his new sun glasses Nada can see the real dark underbelly of the world -or at least the black and white under belly. In out color world we can see the films influence spilling over into some weird places. Such as the “OBEY André the Giant” art work of Shepard Fairey, to “South Park” lifting what is one the best fight scenes hands down ever filmed for their cripple fight between Timmy and Jimmy. Now when you watch this fight scene or rather “anti-fight scene” you’re watching a real fight where only the punches to the face and stuff to the groin were faked –everything else was real hits and some wrestling “magic.” Apparently Keith David and Roddy Piper had rehearsed the hell out the scene and choreographed it themselves… I get that I’m probably preaching to the choir about this movie but if you’re new to the genera or just never seen and been passing by the cover art work from time to time… be ready for “mind blown.” The current generation of movies kind of pushes the idea that everybody knows kung fu and that street fights are won with a single Wing Chung style round house kick to the face. “They Live” shows you kind of what a street fight looks really like, if the parties are sober.

The supporting cast of this film includes Keith David, who if you don’t know him as the voice of “Spawn (HBO version),” voice of the cat in “Coraline” you might know him from John Carpenters “The Thing” or “Requiem for a Dream” as the drug dealer that didn’t want money. I don’t want to say “romantic interest” (maybe female lead) in the picture is played by Meg Foster who was always kind of on the b-list and went a bit closer to Z, she was in the Golan Globus “Masters of the Universe” and then moved onto “They Live” and then was in “The Abyss” rip off film with Peter Weller “Leviathan” and she does a great job playing quietly evil women.

Fun question: what do “Back to the Future,” “They Live,” and the soft core urine, Nazi fetish porn “Ilsa: She Wolf of the SS” have in common? I mean aside from they are all films… This isn’t an easy one for most … Answer is George “Buck” Flower. If you saw a movie in the 80’s you saw him… and if you saw a movies with him in them in the 70’s there was chance you saw a lot more of him with a lot less clothes. Short version is “Ilsa” wasn’t the only soft core he showed up in. In the 80’s and early 90’s he got kind of memorable playing bums and guys sitting in easy chairs. In “They Live” easy chair and when you see him again as the abusive step father in “Waxwork 2: Lost in Time” easy chair again. I don’t know how that works out but I don’t think being his stand in was a tough job –especially if you could drink. Keith David was in two of Carpenters movies but for a while Buck was go to casting for Carpenter, so if you haven’t seen “They Live” you have seen him in possibly “The Fog,” “Escape from New York,” “Starman” -I wonder if Jeff Bridges borrowed some of his Rooster Cogburn from Buck.

“They Live” was written by “Frank Armitage” … or so it says in the credits which is kind of weird, I don’t know if John Carpenter was having some kind of issue with the Writers Guild of America or what but this was film eleven for him but this movie and the film before (“Prince of Darkness”) he used fake names for the writing credits. I don’t know if it was the old H.G. Lewis trick to make the film look more professional by adding more credits at the beginning but the dialogue in this film is amazing.

“Life’s a bitch and she’s back in heat.”

“I have come here to kick ass and chew bubble gum… and I’m all out of bubble gum.”

Some may watch this film and say “conspiracy theorist wet dream” other may watch it and say “this is a metaphor for how the world works and the somnambulistic state media and government try to keep us in” and there is even another group that might know “this movie IS how it is.”