This Cute Robot Bear Was Built to Kill You 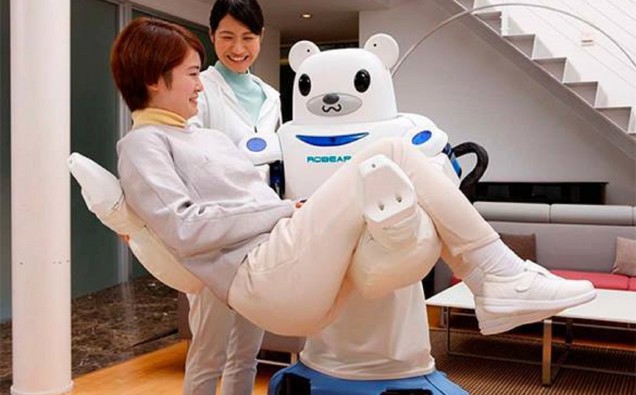 So get this, the Japanese made a a cute robot bear designed to help suicidal people commit…well, suicide. Let that sink in for a minute…sinked in? Good! Looks like killer robots aren’t that fictional after all. To be fair, though, these adorable (yet terrifying) hunks of metal & wire aren’t actively hunting us down to kill us in a variety of way (yet).

Basically, the JSDD & the Orient Industry Company have created the prototype bear robot to assist one with ending their life. Why, you may ask? Or maybe you don’t ask. Maybe you’re taking this all at face value. I’m going to tell you why, regardless. You see, Japan not only has a growing suicide rate, but also an increasing population of seniors who are ready to move on. The JSDD also, mind you, requires it staff to help euthanize those who can’t do it themselves (those who are impaired physically or mentally).

First of all, I can’t imagine being paid to help people kill themselves. I imagine that must take a big toll on the men & women who have to do that. Or maybe they become used to it after awhile. I don’t know, & I don’t really want to find out. Apparently, the JSDD found some concern about this as well, so they helped make “SeppuKuma”. You know, that suicide bear I’ve been talking about.

Just so you’re up to speed, SeppuKuma translates (loosely) to “Suicide Bear”, just so there’s no confusion. What all can this bear do? Well, I’m glad you asked. You see, it can:

Jesus Christ, it has nicknames for the ways it kills people! I’m assuming the thing also has armor plating & dual 5.56mm mounted machine guns because it sounds like a more up close & personal version of an ED-209.

In all seriousness, though, it’s probably a good thing that it exists. Some people have no will to live, & as horrible sounding as it is, who are were not to let them pass away prematurely? It’s a personal choice. As long as the robotic bear doesn’t just horribly maim them & keep them alive…by the way, in a beta test, an earlier incarnation of the robot left 12 patients horribly disfigured but still alive. Might as well call it Freddy Fazbear…shit…