Timeless: The new show on NBC from producers Eric Kripke (Supernatural) and Shawn Ryan (The Shield) 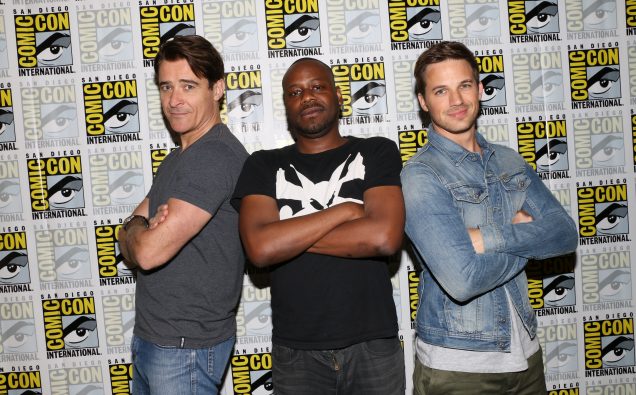 They’re time traveling to the past, to save America’s future……

Timeless is NBC’s offering of one of a few time travel shows this fall and is brought to us by the creative minds of Eric Kripke (“Supernatural”) and Shawn Ryan.(“The Shield”) Let me give you the synopsis straight from the press release: “Timeless is a thrilling new action-adventure series in which a mysterious criminal steals a secret state-of-the-art time machine, intent on destroying America as we know it by changing the past. Our only hope is an unexpected team – a scientist, soldier and history professor – who must use the machine’s prototype to travel back in time to critical events and uncover the mystery behind this dangerous fugitive’s actions.” 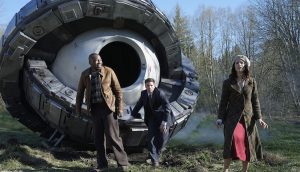 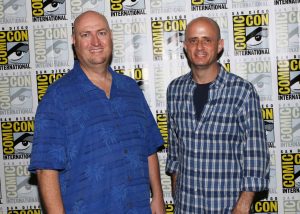 From what I have seen it is pretty great. I love Supernatural and look forward to seeing what Eric Kripke brings to this show. They have a seriously huge budget and are creating some amazing sets. The first episode will start at the 1937 Hindenburg disaster. A mysterious criminal (Goran Visnjic) and his band of bad guys steal a time machine and the plan is to destroy the country by changing the past; Time traveling terrorists as it were. To try to stop this criminal, Homeland Security recruits an unusual team: A college history professor, (Abigail Spencer) a soldier, (Matt Lanter) and a scientist. (Malcolm Barrett) These three must use the not-so-perfect prototype of the stolen time machine to go back in time and try to stop this dangerous criminal. The problem is (as always with time travel) they have to try to not affect the past themselves, and stay one step ahead to the bad guy. Lots of room for drama and adventure! The show has no limits as to where in time they are, so the sky is the limit. With only one episode in the can, the cast and producers were very limited on what they could tell us. Before I got to the Q & A for the show at SDCC I went to the booth outside comic con to get into the mood. After watching a trailer, myself and group of brave fans got to do our own time-traveling, to follow our mission to “protect the past and save the future” in the form of the old favorite carnival ride- The Gravitron (or Rotor if you are as old as me and remember The Pike in Long Beach) With that under my belt and a motion graphics photo emailed to me I was dizzy and ready to learn about the show.

At the Q & A press got a chance to hear a little about the show. Co-creators and producers Eric Kripke and Shawn Ryan gave us some insight into what the show is all about. “I’ve always watched genre stuff and I haven’t really written any and to have someone so well versed like Eric help me along the way was really appealing to me. I never want to repeat myself with my TV shows. I’m always looking to do something different. I’m very impressed with the work that Eric has done.” Shawn shared. “I’ve made his first time in genre very gentle!” Eric laughed. “We are a good team; we each bring something very specific to the table. Shawn’s focus on character is amazing, my knowledge of genre is very useful and I think the combination of them both creates a show that I think will be a little deeper and a little more character driven than your usual genre show.” There were a few different ideas thrown out before they settled on time travel. “I said to Shawn- we should do time travel, because then we know were going to a different time period every week and I know that we can do a different show every time, we aren’t just looking a blank board. We can say to our writers ‘What time period are you fascinated with, what characters in history are you dying to meet?’ There’s so much fascinating material, that nobody knows and we can make this kind of asskicking fun show, without being just a boring history lesson.” Eric said. “All TV is ultimately about the characters. Who are these people that are traveling through time, what is their relationship with each other? We want this to be very visceral, and current and complicated. So that was the vast majority of our conversation, who are these people, why do we care about them, how are they human and real?”

Shawn finished Eric’s thought. “The plot comes last, the characters and emotion come first. We had to figure out who the characters were and why we should like them. I have two kids and I wanted a show our whole family could watch and really kind of bond with and enjoy together. And maybe we’re in a place in history right now, where we really want and need to see some more heroes on TV.”

Next we got to talk to three of the stars from the show. We missed getting to meet Abigail Spencer who plays history teacher Lucy Preston, but it was fun talking to Matt Lanter, (OMG, the blue eyes) who plays Sgt. Wyatt Logan, Malcolm Barrett our scientist Rufus and our striking bad guy Garcia Flynn played by Goron Visnjic. Only being a few days into the second episode, the guys kept it pretty quiet about what the show is about and where in time they will go. No spoilers here. But it was easy to see that even this early on, the cast is very excited about the possibilities of what the show can become.

Malcolm: “It’s so exciting to be here as part of this epic show, where all of our faces are on busses. It’s beautiful, life changing and surreal. It’s really fun to be a part of a show that I like, and actually have it promoted by the network.”

Matt: “Everyone that has seen the pilot has reacted very well to it. People that don’t need to tell us that they love it, say they love the pilot.”

Goran: “So far the entire show is the same scale as what they did in the pilot! Right now we’re doing a replica of the Ford Theater in Washington DC, practically built out! Imagine if you see The Shield and Supernatural and you know that the creators of these two shows are doing a script about time travel, then let your imagination run and that’s what we have here, along with a nice budget. Without sounding egotistical, I think we’re here to stay at least to give an audience a big chunk of episodes, so they say wow, we got something really good.”

So why are we going to love the characters? Are we going to hate our bad guy, or does he have some redeemable qualities? How much do the actors know about their characters so far?

Matt: “In the true Shawn Ryan and Eric Kripke style, there’s no true hero or true villain because everyone believes what they are doing is right and they are motivated and they all have secrets. I think you’ll discover a lot about all of us as the show goes on. What makes everyone likeable is that all of our motivations are different and will end up evolving. I think naturally Lucy, the historian, wants to simply preserve history, but we see very quickly that there are personal ramifications that happen because of small changes. For myself we find out in the pilot that his wife has died, and obviously it’s not too bold to say that will come into play. Which is a direct contrast as to who he is. He is mission oriented, it’s what he’s used to and that’s what he’s done for a long time now. When you have any character who is battling with himself or herself, against everything they believe in, it’s when interesting things happen.”

Malcolm: “We all have tidbits of our characters so far. We do our homework and know who we are, but we’re all sort of hiding something from each other, and some of the things we know, but there are a lot of things we don’t know yet. So all of us are people that have motivations that are not visible on the surface. I’m sort of working for this company that built the time machine, and that company has all these bigger inner workings that the rest of the characters don’t really know and I may have some ideas about. That’s the other part of the story: we all have secrets but we have to learn to trust each other.”

Why is the show on a network instead of cable like most genre shows are?

Goran: “The reason why we are on network is we can do a big show, with a beautiful production value, and still bring the characters out.”

Matt: “What’s exciting is that we are bringing that sort of edgy current sensibility to network television, with that network big budget together with the epicness of what we are doing. We’re going to the Hindenburg, were going to the Civil War, so were taking on these huge, important periods of time and doing it beautifully, in my opinion. In terms of the scale, in terms of the creativity, the costumes, the effects, the practicality, all of it. We’re going balls to the wall!”

Do you guys get any input into your characters or where you go in time? If you had a choice, is there a criminal in history you would like to see in the show?

Malcom: “We don’t need to. What’s great is Shawn and Eric are actors’ writers. Since the beginning they want to write to our strengths as individuals, they hired us for a reason. They are experienced enough that they know how to incorporate actors into roles. Shawn has really created a family atmosphere. We all watched the pilot at his house and his family was there. They are both incredible to work for.”

Matt: “I’d like to interact with Bonnie and Clyde, and since they closed the case, D.B. Cooper would be interesting.”

Go to NBC/Timeless to watch a trailer and find out more. Don’t miss the great new show Timeless when Season 1 premieres Monday, Oct. 3, 2016 on NBC