When the love of film meets brilliant artistic talent.

When a big studio ramps up an advertising or promotional campaign, they have graphics designers on staff to create posters and other marketing materials. While these designers are no doubt talented and the process itself is artistic, it’s a job. Also, when designing for a big studio, your work is at the mercy of dozens of executives giving input. In these situations, the results are often lackluster and unoriginal. 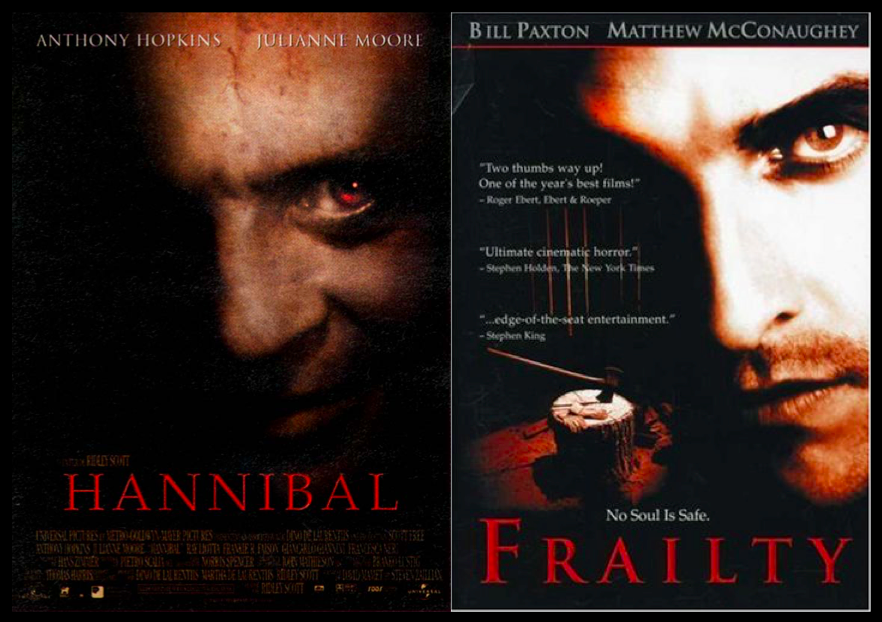 When a movie fan takes it upon himself to create an alternative poster, there’s no paycheck involved—but there is complete artistic freedom. This allows for truly independent thinking and a process free from economic pressures and expectations. It’s just done for the love of cinema and the pleasure of making art. The results can be spectacular!

I’ve scoured the internet to bring you this list: The Top 10 Fan-Made Horror Movie Posters! Enjoy!

Insect uses bright orange and pink to catch your eye; it’s only when you allow yourself to absorb the poster’s intricacies that the darkness of Hostel bubbles to the surface. The images of violence and torture contained within a seductive silhouette illustrates how the characters in the film were lured to their doom with the promise of sex. 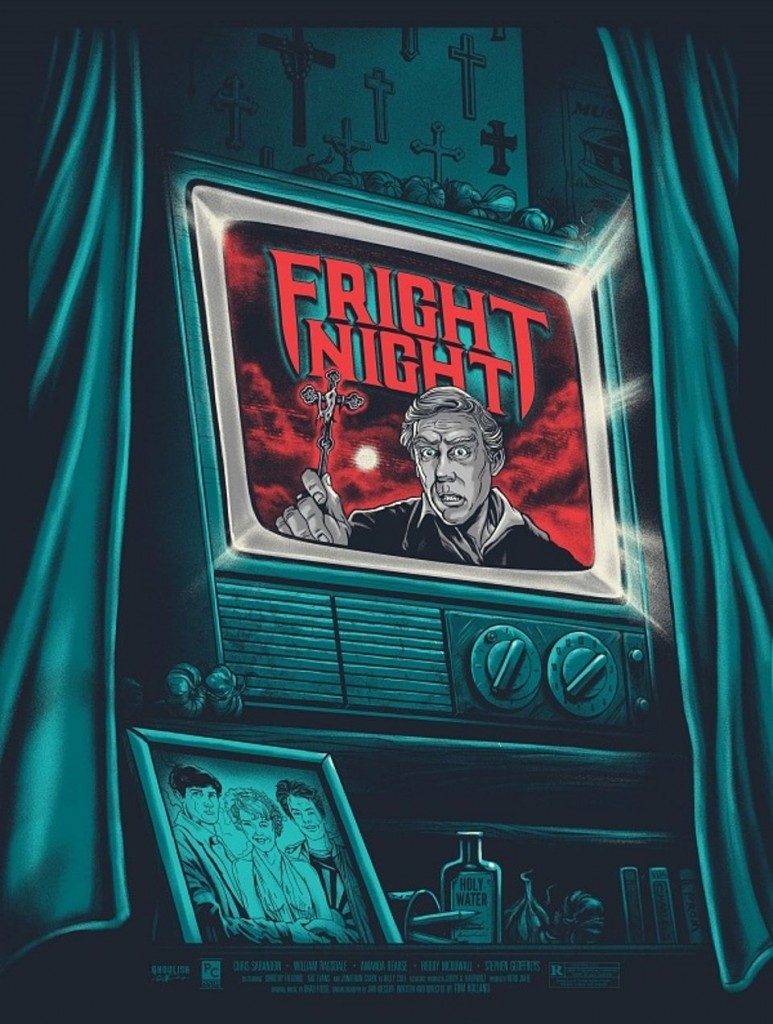 The cartoon style is reminiscent of the posers for Creepshow, inspiring nostalgia for the 1980’s and implying that Fright Night is a good-time movie viewing experience.   Excellent details include the holy water and cloves of garlic; the picture of Charlie, Amy, and Ed enjoying happier, simpler times is poignant.

The Fly (1986, Cronenberg) by Jonny Dombrowski 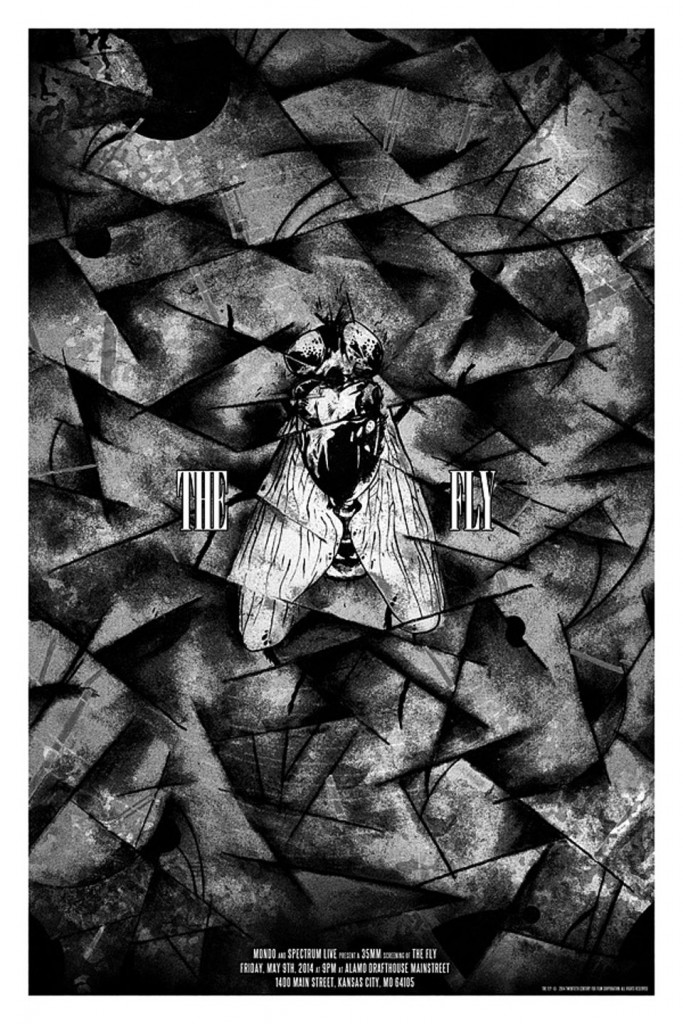 Simple, monochromatic, and striking, Dombrowski’s poster for The Fly is surprisingly unsettling. The fracturing of the image corresponds to Seth Brundle’s fractured humanity, while also giving the effect of seeing the world through compound eyes. 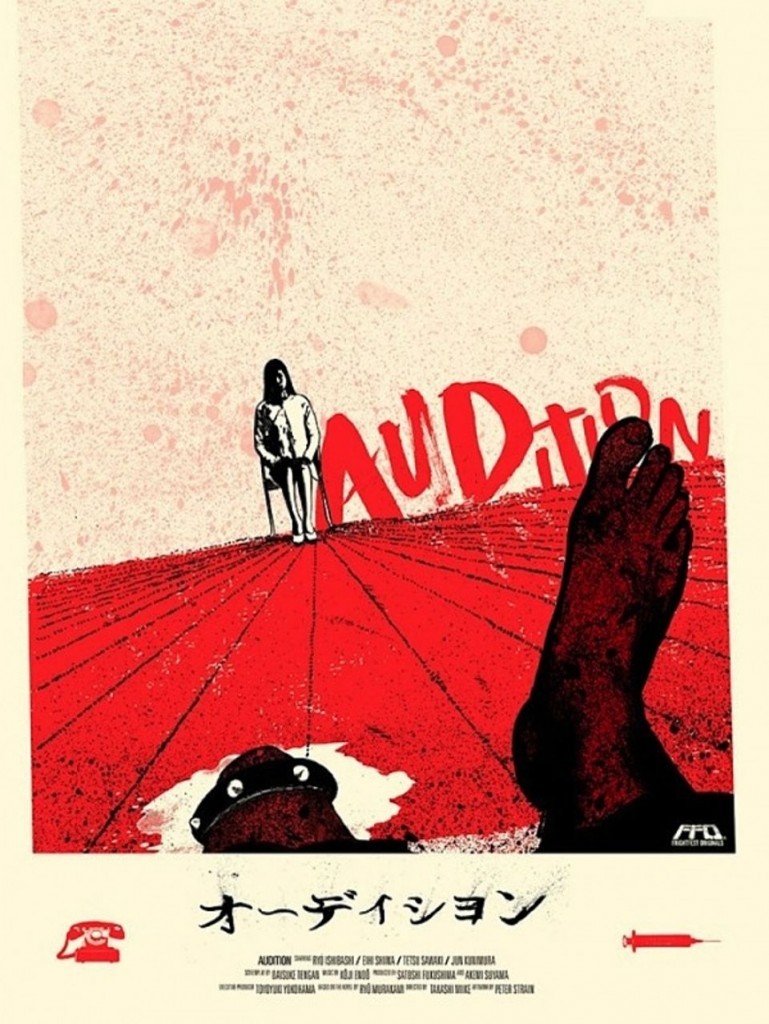 Strain uses the same colors as the official poster for Audition (red, white, and black) making his creation feel canonical. But whereas the official poster only illustrates a single scene from the film, Strain’s poster seems to tell the entire story without giving anything away for those who haven’t seen the film. 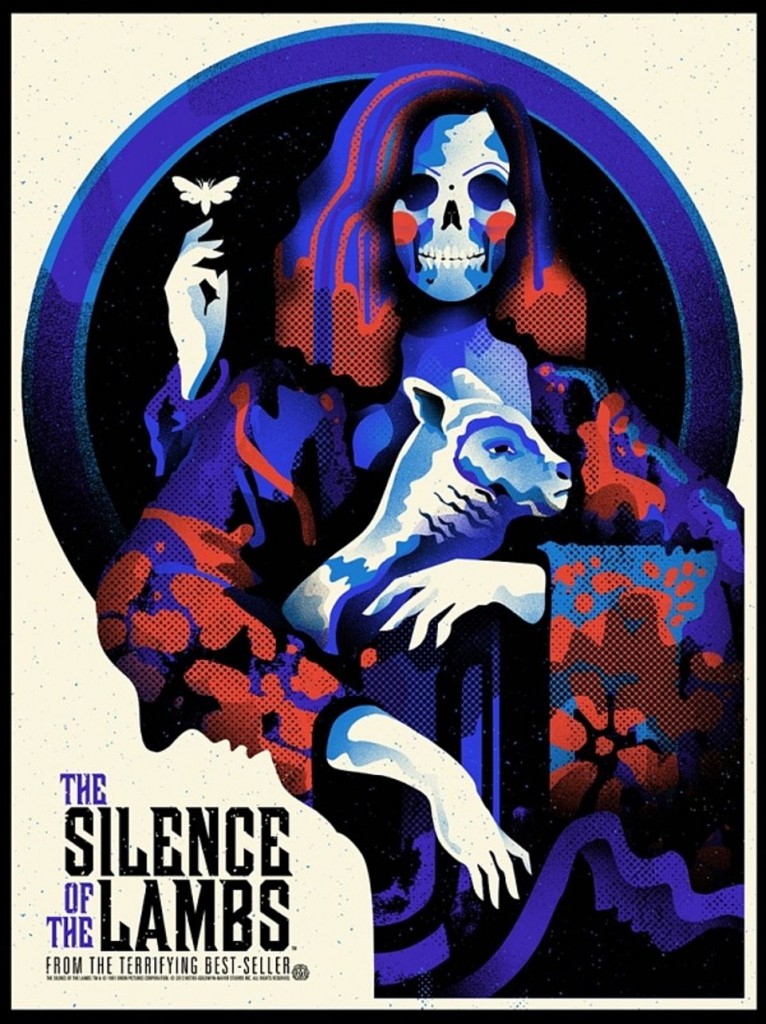 The silk-screened aesthetic gives this poster for The Silence of the Lambs an old-school, almost punk feel. It’s easy to imagine it adorning telephone poles or emblazoned on a t-shirt. The surrealist style corresponds to the film’s complexity and subtext—like a fever-dream. 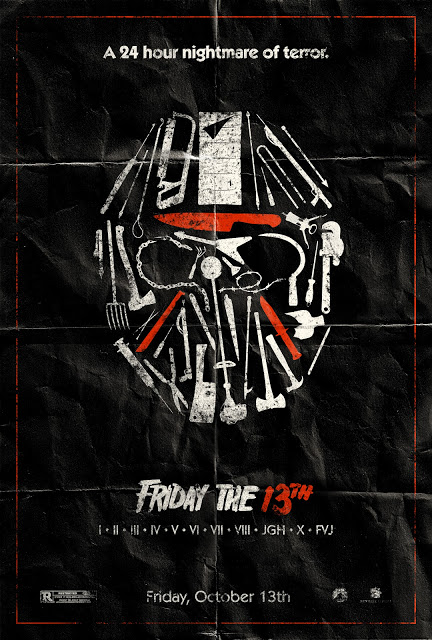 Using nothing but two-dimensional, single colored objects arranged in the shape of a hockey mask, Rabalais has created a tribute to the entire Friday the 13th Franchise. His use of Jason’s favorite weapons from all 11 films is like a stroll down memory lane. The fold-lines make this piece reminiscent of the posters found inside issues of Fangoria and other old-school horror mags. 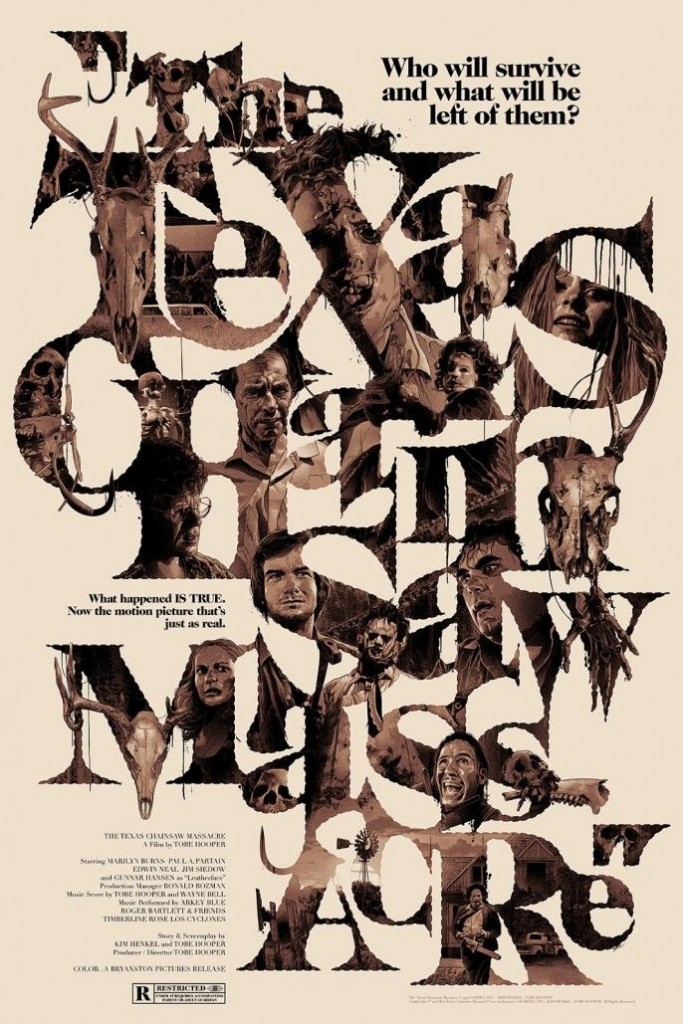 This fan poster was made in a retro-style similar to the official poster for The Texas Chainsaw Massacre, yet still manages to be wholly unique. The sepia-tones and detailed imagery seem almost photographic at times. Again, another example of a poster that seems to tell the film’s entire story without giving anything away. 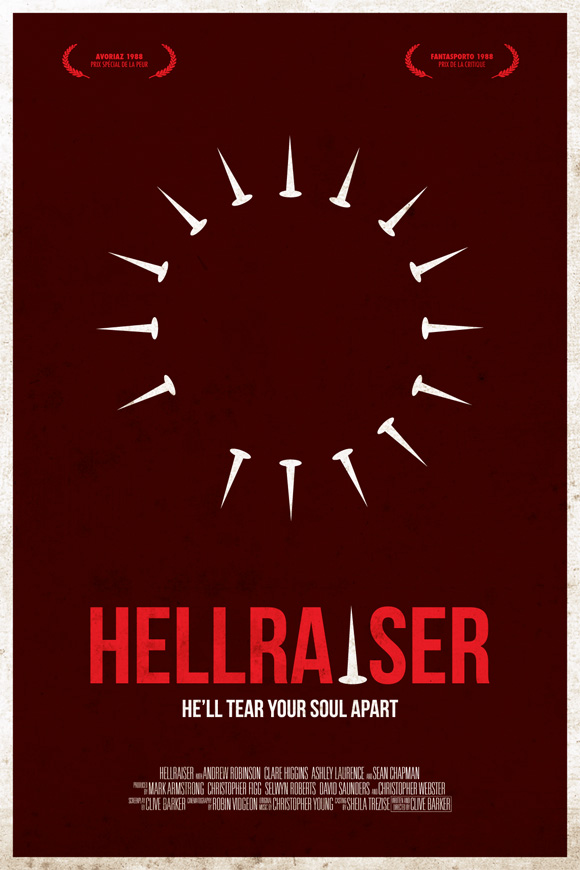 Roche, known for his minimalist style, has created an entire series of film posters; I chose to include his rendition of Hellraiser. While the clean lines and solid colors might seem at odds with the messy film it portrays, I find the severity of it very fitting. The nails arranged in a circle make a halo which is a perfect representation of Hellraiser’s most evocative line: “Angels to some, demons to others”. 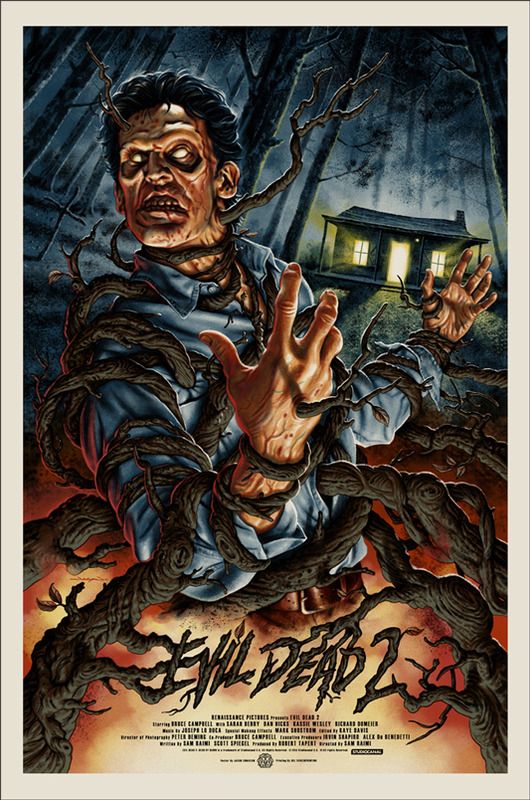 The full-on graphic novel styling of Edmiston’s poster is perfect for the outlandish energy of Evil Dead 2, a film that is both terrifying and cartoonish. This poster tells a story that resonates with fans while captivating those unfamiliar with Ash and the Deadites. Including the creepy cabin in the woods is a brilliant detail.

They Live (1988, Carpenter) by Needle Design 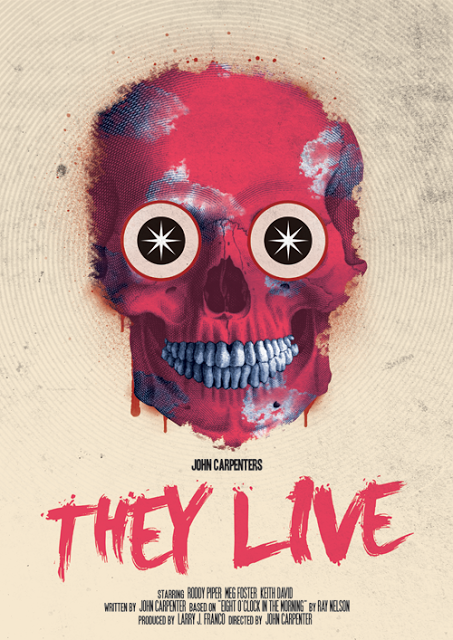 While the official poster for They Live is nothing short of brilliant, I love the way Needle Design has taken this film into the 21st Century. The starbursts eyes hints at the aliens’ hypnotic abilities, but also gives the poster a “raver” quality that’s terribly original. Since the face is actually quite different from the aliens in the movie, it’s easy to imagine this as a poster for a reboot (something I’m all in favor of, in this case).

What do you think about these brilliant fan-made horror movie posters? Sound off in the Comments section!