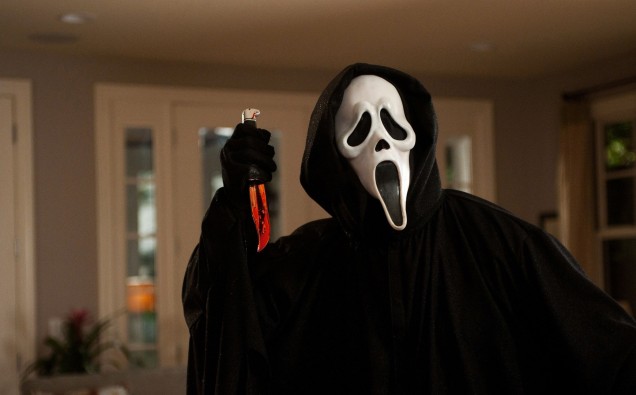 As we embark on a new year of terrifying horror movies, it’s fun to look at our favorite genre chillers that are turning 20-years-old in 2016.  It’ll make you appreciate how quickly the years fly by!  If you actually saw these films when they were released, you aren’t necessarily old—but you probably feel like you are!

It’s also interesting to reflect on what was popular two decades ago vs current trends in the industry.  It becomes obvious that there are fundamental differences between what was considered terrifying in the 1990’s and what scares us now, in 2016.  But mostly, it will make you appreciate awesome horror films that withstand the test of time; twenty years later and these gems still sparkle!

Scream (Written by Kevin Williamson and Directed by Wes Craven)

This December will mark 20 years since Scream hit the horror scene like a sledge-hammer, shattering every established rule and expectation associated with the slasher genre.  Through 3 sequels and a hit TV series, Ghostface has risen to the upper echelon of iconic horror villains.  Scream immortalized and subverted the seemingly innocent question: “What’s your favorite scary movie?”

The Frighteners (Written and Directed by Peter Jackson)

Still years away from mainstream success helming The Lord of the Rings Trilogy, Peter Jackson was still a young up-and-comer out of New Zealand when he released The Frighteners in 1996.  Michael J. Fox plays protagonist Frank Bannister, his best role since Marty McFly.  Jeffrey Combs is brilliant as sinister Milton Dammers.  The humor and action are both high octane, and the FX hold up surprisingly well for a movie about to turn 20.

I consider Bloodline, the fourth chapter in the Hellraiser Franchise, one of the best of the series, and I’m not ashamed to admit it.  It’s basically an anthology that explains the origins of the terrifying Lament Configuration and extends eons into the future, culminating in the death of iconic lead Cenobite, Pinhead.  Bloodline merged aspects of science fiction and underworld mythology a full year before Event Horizon hit the scene.

Quentin Tarantino got a lot of press this week for revealing he’d like to helm a horror movie, but the truth is, he’s hardly a stranger to the genre.  His collaboration with Robert Rodriguez, From Dusk til Dawn, is a madcap spin on the Vampire subgenre and laid the groundwork for the duo’s Grindhouse films (Death Proof and Planet Terror) released in 2007.  The film went on to spawn a hit TV series.  Fans of 1990’s horror should plan another visit to the infamous Titty Twister!

Fear (Written by Christopher Crowe and Directed by James Foley)

Mark Wahlberg was still best known as an underwear model and front-man of The Funky Bunch when he starred as obsessive teenage stalker David McCall; handsome and easy-going, his exterior masks a deeply troubled soul.  Billed as Fatal Attraction for the high school sect, Fear is a surprisingly impactful exploration of teenage obsession and violence.

Mary Reilly (Written by Christopher Hampton, Directed by Stephen Frears, Based on the Novel by Valerie Martin)

Mary Reilly is one of the 1990’s most underrated horror movies, a hypnotic and poignant reimaging of Dr. Jekyll and Mr. Hyde.  Julia Roberts stars as the titular Ms. Reilly, a rare foray into horror for an actress best known for drama.  John Malkovich is simultaneously pitiable as the conflicted Dr. Jekyll and terrifying as the unhinged Mr. Hyde.  Director Stephen Frears excels at stoking the sexual subtext buried deep inside this familiar tale.

The Craft (Written by Peter Filardi and Directed by Andrew Fleming)

We can thank The Craft for cementing my love of Goth chicks at an early age!  This is the second film on this list that features Neve Campbell, proof that 1996 was definitely her break-out year.  The tale of a high school coven still resonates with fans of horror and 1990’s nostalgia.  Not surprisingly, a reboot of this genre favorite is currently in the works.

Bordello of Blood (Written by William M. Gaines and Directed by Gilbert Adler)

One of the best Tales from the Crypt offerings, Bordello of Blood is equal parts sex, gore, and comedy starring Dennis Miller and Erika Eleniak.  The tale centers on a funeral home that doubles as a bordello for vampire prostitutes by night, and can almost be regarded as a companion piece for From Dusk til Dawn.  Anything released under the Tales from the Crypt banner is worth your attention, and Bordello of Blood is no exception.

Thinner (Written by Michael McDowell, Directed by Tom Holland, and Based on the Novel by Stephen King)

Thinner certainly isn’t the most lauded film adaptation of a Stephen King novel, but it’s certainly one of the most unnerving!  An exemplar of Body Horror, it creates an unescapable sense of dread, a paradoxical claustrophobia within the self.  The film benefits in no small part from Tom Holland’s outstanding direction and Robert John Burke’s stellar lead performance.  Don’t mess with Gypsies!

Okay, The Island of Dr. Moreau is definitely not one of the best genre films of 1996, but it is (without a doubt!) essential viewing for all horror fans.  The film is chaotic and bizarre, simultaneously captivating and completely laughable.  While the creature FX are brilliant, the film lacks any coherent center and is very often hilarious—unintentionally so.  Despite being terrible, it is unabashedly self-assured—charmingly so!  To fully appreciate this fabulous disaster, be sure to follow it up with the documentary Lost Soul: The Doomed Journey of Richard Stanley’s Island of Dr. Moreau (2015) for an unbelievable backstory that’s more outlandish than fiction!

What are your favorite horror movies turning 20-years-old in 2016?  Sound off in the Comments section!