And what you can do to help make it happen! 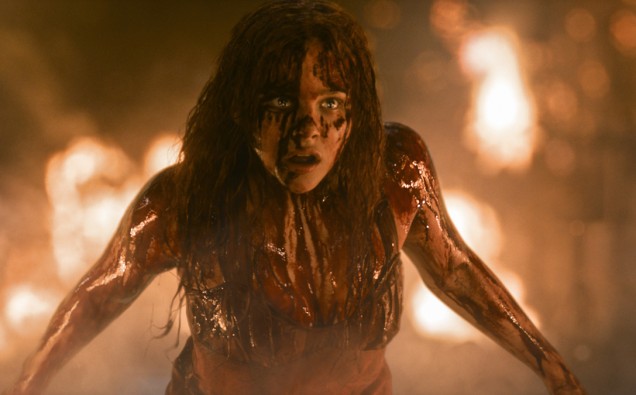 2013’s film adaptation of Stephen King’s Carrie certainly isn’t the best remake even, but it’s far from the worst in recent memory (*cough*Poltergeist*cough*). But what if the version we saw in theaters, and later on DVD, wasn’t true to director Kimberly Pierce’s ultimate vision? What if over 30 minutes of footage exists but remains unassembled and unseen?

Part of what made Brian de Palma’s 1976’s adaptation of Carrie such an enduring classic is the way it builds slowly towards a climax that’s both terrifying and gut churning. The suspense comes from the fact that we know something terrible is going to happen, but the story unfolds in slow motion (literally at times) in a way that prolongs the audience’s dread. While the film clocks in at an industry standard 90 minutes, the experience seems to last hours. It stands to reason, therefore, that adding additional material to 2013’s Carrie will only enhance the experience in the same way: By prolong the sense of impending dread.

The missing scenes from 2013’s Carrie are the stuff of legends. After compiling information from test audiences and insiders, a group of uber-fans has concluded that there could be up to 45 additional minutes of footage, yet only 12 minutes of deleted scenes made it onto the film’s DVD. That means there’s still over half an hour out there. They’ve put together a list of dozens of speculated omissions and attached it to an online petition directed at Metro-Goldwyn-Mayer, Sony Pictures, Screen Gems, 20th Century Fox, and Misher Films. You can view this list in its entirety (and sign the petition): HERE. 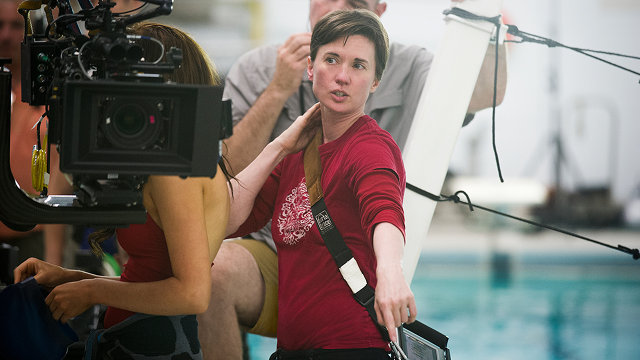 I can’t say I’d like to see every one of these examples reinstated into 2013’s Carrie; some seem better left excluded—like a few scenes that actually made it into the film (I was never a fan of the book-levitating scene, so extending it doesn’t seem like a good idea in this case). Still, there’s definitely plenty of potential gold on this list. I’ve compiled what I consider to be the 10 most exciting & intriguing moments that never made it into 2013’s Carrie—moments thousands of fans are anxious to experience. I think you’ll agree these gems would definitely add substance to Pierce’s film. Enjoy!

Hail: Otherwise known as “The Rain of Stones” (this was originally the opening scene) – reference the current Blu-ray edition. It’s been speculated that the version available on the Blu-ray edition was heavily edited. Fans would still prefer to see Carrie’s birth scene as the opening and the Hail scene as a flashback during The White Commission.

Carrie’s birth coinciding with a “rain of stones” is a poignant moment of King’s novel that wasn’t included in De Palma’s film either. It’s a moment fans have yet to see visually portrayed in film. The White Commission: The film had integrated several courtroom scenes with witnesses giving testimonies of their experience with Carrie White leading to the prom incident, essentially structuring the film as a series of flashbacks and recollections. It begins with an interview with an adult Estelle Parsons (who witnessed the Hail as a teenager), Sheriff Otis Doyle, Dr. Dean L. McDuffy, Erika Gogan, Ms. Arlene Walsh, and others who had some kind of experience with Carrie White and/or theories about the Black Prom.

Information culled from “The White Commission” is one of several framing techniques King uses to advance the plot of his novel, appearing in pieces as the story unfolds. I think this would have added nuance to the film as well, hinting at tragic aftermath as the story builds towards climax.

The Found Footage that had been filmed by Freddy “Beak” Holt – and there is currently speculation that other found footage from gymnasium security cameras also played a role in the film.

Oh quit rolling your eyes! I’m not saying I wish the entire film was found footage, but there’s no denying that some skillfully placed camcorder or security footage can definitely yield chilling results.

Sue’s Video Diary apparently took place in her bedroom as she documented her daily life and thoughts concerning Tommy, Carrie, Chris, and the prom.

Besides Carrie herself, Sue Snell is perhaps the most tragic character in King’s novel and all subsequent film adaptations. She’s one of the few characters with a conscience and a moral code. She genuinely had the best of intensions when she sets Carrie up to attend the Prom with Tommy; it was a mea culpa and a karmic rebalancing. But there’s no denying that none of this would have happened if Carrie had simply stayed home on Prom night. Sue’s unwitting culpability leaves her a shattered soul, and anything that adds insight to her character would be a welcome addition to Pierce’s film. 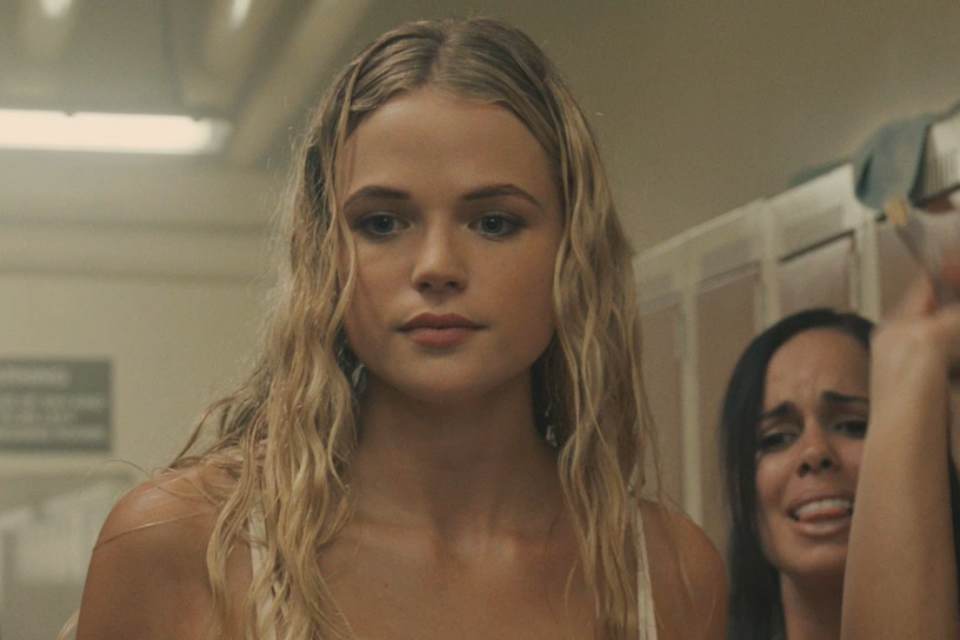 Another key to the success and endurance of De Palma’s Carrie is that he gave us characters that we either really loved or really hated; only the background actors were 2-dimensional. Character development is sadly underutilized in many of today’s horror offerings, so anything that adds depth and inspires an emotional connection will only add to the ultimate pay-off of the film’s climax.

The Town Destruction: According to test-audiences, Carrie uses her telekinesis to set “some other buildings” on fire aside from the school. It was said that the majority of this scene consisted of areal shots intertwined with some close-ups – reference the teaser trailer from October 2012 below:

Hold the phone: They had areal footage of the town going up in flames and decided not to use it! What moron made that decision? “Yeah, we filmed a bunch of buildings going up in flames that served as a physical metaphor for Carrie’s rage, footage that would have upped the intensity during an already-intense climax—but let’s cut it from the final version.” Fire that man!

Margaret escaping from the closet and cutting herself with a knife – reference the current Blu-ray edition. It’s been speculated that the version available on the Blu-ray edition was heavily edited and removed the shots revealing Margaret’s escape.

Comparing Piper Laurie’s portrayal of Margaret White in 1976 to Julianne Moore’s portrayal of Carrie’s mother in 2013 is a bit like comparing apples and oranges. It can be denied that it is one of the highlights of Laurie’s career, and immortalized the line: “They’re all going to laugh at you!” While Moore’s portrayal of this same character isn’t a career highlight, I think her portrayal of Margaret White is more in line with the character as portrayed in Stephen King’s Novel. Truth is, Moore knocks it out of the park, and any additional footage of her performance can only enhance to final product. 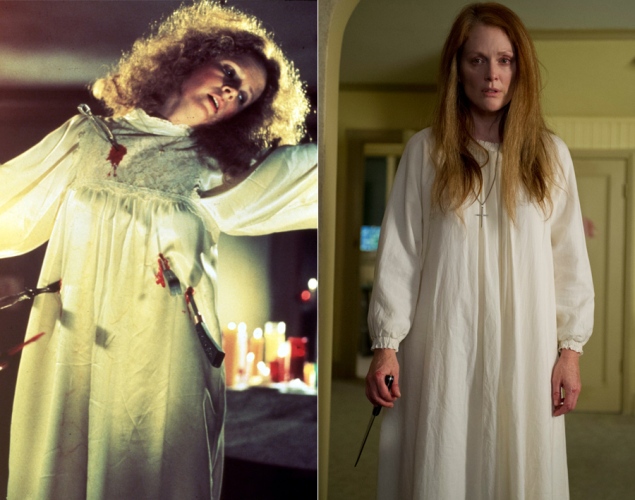 Margaret’s original death scene which was said to be closer to the novel. It was changed to the theatrical version when re-shoots were done in May 2013.

Moore’s death scene was riveting, but of course I’d rather see it as described in Stephen King’s novel. Who wouldn’t?

The Prom Scene (Extended) was said to be longer and more violent than the theatrical version. Also: Carrie outside the school using her telekinetic powers to kill off some of the prom survivors who escaped.

If the film is going to be extended in its lead up to the infamous Prom scene, it only stands to reason that this climax should also be extended. This is the moment we’ve been waiting for, dreading! Now that the horror has arrived, make it last! 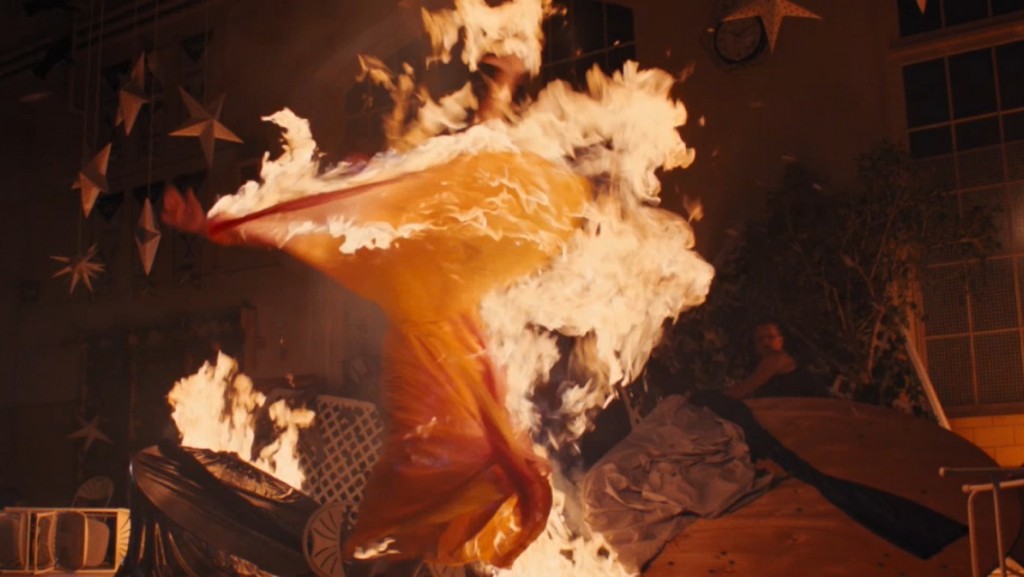 The multiple endings: Five alternate endings were filmed for Carrie. The first ending was very similar to the 1976 film but without Sue waking up. The second ending was exactly the same as the 1976 film. The third ending is a “morning after voiceover” by Sue as the audience sees what’s become of the town and how they’re coping. The fourth ending shows the town filled with news crews, reporters, and police officers talking about what happened and describing the event as “a conspiracy” to apparently “cover up what really happened” in Chamberlain. The fifth ending was not shown to test-audiences – though many Carrie fans presume that this fifth ending was the one released on the Blu-ray edition. Many hope that all five endings will somehow be “mashed together” for a definitive close.

Yeah, sounds good to me!

As of publishing this article, the online petition demanding a Director’s Cut of Carrie (which launched last December) is over 65% of the way towards its goal of 20K signatures. Let’s help them take it all the way home! Sign it now: HERE!

These additions probably won’t transform Pierce’s Carrie into the greatest remake in history, but it seems obvious that there’s plenty of incredible material out there that deserves to be seen.

Would you pay to see a Director’s Cut of 2013’s Carrie? Are you going to sign the petition? Sound off in the Comments section! 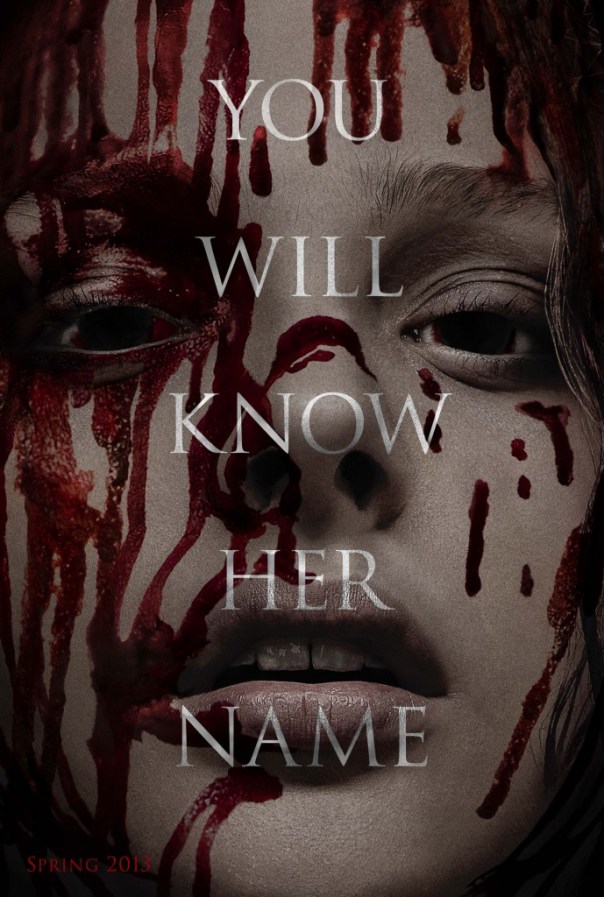