From human into something else entirely. 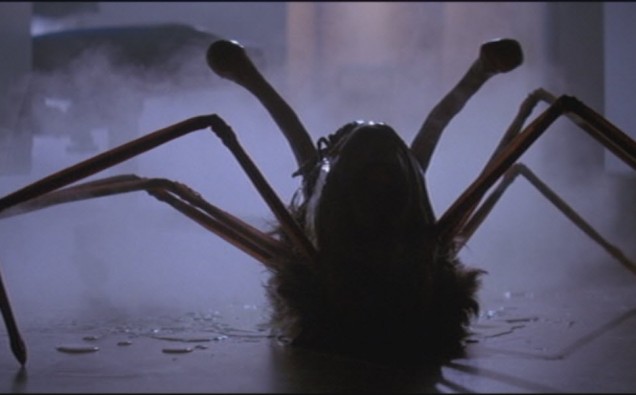 Humans transforming into animals is a common phenomenon in film and literature, dating back to some of mankind’s earliest mythologies; for example: Zeus turned Lycaon into a wolf and Athena turned Arachne into spider. It’s a concept that strikes fear into most, as it implies a loss of our connection to humanity and, in some theologies, even the loss of one’s very soul. One of the most terrifying moment of my own childhood, in fact, was when I watched Pinocchio turn into a donkey.

In all of the cases mentioned above, transformation was a form of punishment. And while there are those, in life and in fiction, who crave a form of animalistic metamorphosis, film and literature are fraught with condemnation towards those who might attempt it. Dr. Jekyll’s flirtations with unleashing his primal self, for example, eventually left him permanently trapped as the detestable Mr. Hyde. Allegorically, it’s a warning against going to extremes in one’s quest for personal transformation.

Some of the most compelling and evocative moments in horror center on transformations, exacerbating all of the associated anxieties. The 1980’s and early 1990’s were a golden age for practical creature and gore FX; artists and filmmakers created some of the most impressive and shocking transformations in cinematic history. As movie FX gravitated towards the computer generated, a visceral component was lost—tragically so in my opinion. I believe that the sleek complexity of CGI can’t evoke the same gut-level reactions that practical FX do. So even though I consider myself primarily a 21st Century Horror Historian, there are hardly any films produced since the 2000’s that can compare to what talented geniuses concocted in the 1980’s; those that do compare artistically use little or no CGI at all.

The transformations listed below are some of the most impactful in all of horror. I’m focusing on human characters that become something completely inhuman. Enjoy!

The Transformation of Dr. Philip Channard in Hellbound: Hellraiser II (1988) 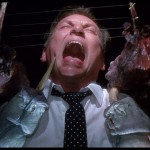 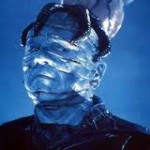 Dr. Philip Channard (played by Kenneth Cranham) is a psychiatrist and surgeon who satisfies his sadistic bloodlust by experimenting on mentally ill patients under his charge; he’s also obsessed with learning all of the secrets of Hell. When Channard finally enters the dark labyrinth, he’s forced into Leviathan’s “Creation Chamber”, a sort of hideously supernatural iron maiden, where he’s transformed by The Engineer. He emerges as a Cenobite, drained of blood and embalmed, scalped, and with wires slicing into his face; this is when he utters one of the franchise’s most celebrated lines of dialog: “And to think… I hesitated.” As an added bonus, the Channard Cenobite is connected to Leviathan through a phallic umbilicus attached to the top of his head. He also sports shape-shifting tentacles that extend from the palms of his hands.

The Transformation of Grant Grant in Slither (2006) 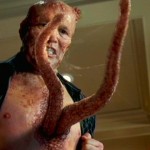 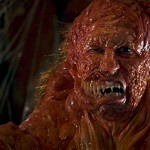 Grant Grant (played by Michael Rooker) a car salesman from South Carolina, is a putz; as a big fish in a small pond, he’s able to marry a woman who would otherwise be out of his league—but that doesn’t stop him from gallivanting with local floosy Brenda. While trysting in the woods one night, Grant is infected by an alien parasite that takes control of his body while assimilating all of its host’s memories. As Brenda swells to hideous proportions, Grant begins mutating into a hideous slug-like creature with tentacles. As townsfolk also become infected by the parasite, they merge with Grant as they mutate, creating an alarmingly colossal (and alarmingly disgusting) alien entity. 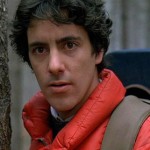 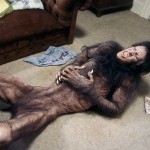 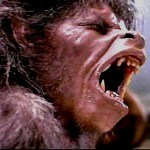 An English backpacking adventure takes a nightmarish turn when American David Kessler (played by David Naughton) is attacked by a feral beast while trekking through the Yorkshire Moors. While David’s lycanthropic transformation is hardly the first in cinema, it was a huge leap forward in terms of practical FX and filmmaking and is still regarded as one of the most terrifying human transformations in all of horror. This scene is still considered groundbreaking for the way it shows David’s complete transformation with hardly any cutaways, revealing a process that is both nauseating and painful: The way his face extends into a muzzle, the way his fingers elongate, the way his bones crack and reassemble themselves internally, all make for an engrossing and terrifying display.

The Transformation of Vance Norris in The Thing (1982) 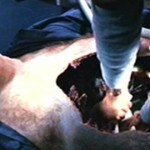 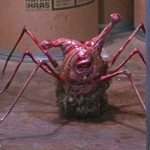 Vance Norris (played by Charles Hallahan) is the geologist at the doomed Antarctic research center featured in John Carpenter’s The Thing.  All hell breaks loose after a bout of paranoia threatens to rip the entire station apart; in the midst of the chaos, Norris, appearing to succumb to the stress, begins having a heart attack. The transformation that follows remains one of the most shocking, disgusting, and celebrated in all of horror history. As Dr. Copper presses defibrillator paddles into Norris’s chest, his entire upper torso collapses, revealing a gigantic mouth that chomps the physician’s arms clean off.   As the rest of the crew descends into blind panic, Norris’s head detaches itself from his body and mutates into a singularly hideous spider/crab monstrosity. It’s a scene of unusual resonance that is impossible to shake once seen. Even 30 years later, and with all the CGI technology available to filmmakers, Norris’s transformation remains unequaled.

The Transformation of Dr. Edward Pretorius in From Beyond (1986) 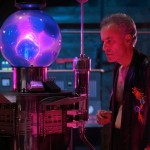 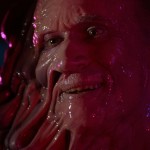 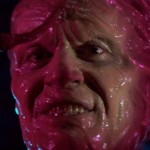 Dr. Edward Pretorius (played by Ted Sorel) is a mad scientist with a penchant for S&M who created a machine called The Resonator in order to study dimensions beyond our own. Creatures emerge and appear to decapitate the scientist, but it’s later revealed that he actually entered another dimension where he’s transforming into something disgustingly atrocious—not to mention sadistically evil. Throughout From Beyond, Dr. Pretorius continues to mutate, until he finally appears as a massive flesh-colored gastropod, oozing viscos mucus.

The Transformation of Seth Brundle in The Fly (1986) 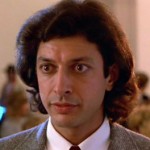 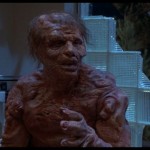 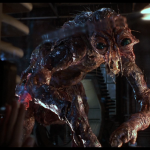 Experimental physicist Dr. Seth Brundle (played by Jeff Goldblum) is definitely one of the most sympathetic characters on this list, as his motivations involved making a positive contribution to all of humanity. He is, however, guilty of impatience, jealousy, and ambition—characteristics that each contribute to his downfall. Dr. Brundle decides to forgo safety protocols (and common sense) by using himself as a test subject for his “Telepods” (teleportation machines) unaware that a common housefly has entered the transport chamber with him. What first seems like a blessing (increased strength and virility) soon proves systematic of the terrifying transformation unfolding within him, as the housefly’s DNA combines with this own. He loses his teeth and fingernails, forms an exoskeleton, and begins eating (and acting) like a fly. The final result of Brundle’s sickening transformation cemented David Cronenberg’s status as the King of Body Horror, and won Oscars for make-up and FX artists Chris Walas and Stephen Dupuis.

The Transformation of Ginger Fitzgerald in Ginger Snaps (2000) 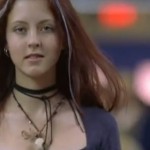 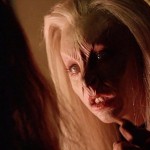 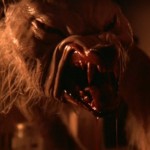 The transformation of Ginger Fitzgerald (played by Katharine Isabelle) into a werewolf in the movie Ginger Snaps is on par with that of David Kessler in An American Werewolf in London. While this speaks to the brutality and agony of the transformation, it also proves that even in the age of CGI, practical FX still reign supreme in terms of creating visceral, physical reactions in viewers. But the FX team of Ginger Snaps didn’t simply replicate David Kessler’s transformation; rather they incorporated elements that made Ginger’s transformation uniquely captivating in its own right. Specifically, the way Ginger’s wolf retains its femininity and the beast’s ability to emote clearly conflicted emotions is what earns this transformation Top 10 status.

The Transformation of Wallace Bryton in Tusk (2014) 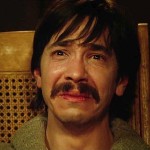 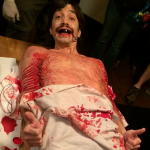 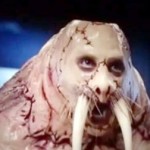 In terms of sheer grotesquery, the transformation of podcaster Wallace Bryton (Justin Long) at the hands of demented Canadian Howard Howe (Michael Parks) is tough to beat. After regaling Bryton with tales of his adventures at sea (including time spent in an unusually relationship with a walrus) Howe drugs the pseudo-journalist, making him an unwilling participant in the former seaman’s depraved fantasies. Part of what makes this particular metamorphosis so disturbing is that Howe isn’t a doctor or a scientist, appearing completely self-taught at extreme body modifications. Long does an amazing job at emoting the unbelievable horror of his character’s predicament, to the point that his agonizing screams become nearly intolerable. When Howe’s work is complete, Bryton barely retains a shred of his humanity, and what little is left must be sacrificed if he hopes to make it out of the maniacal Canadian’s clutches alive.

The Transformation of Debbie Stevens in A Nightmare on Elm Street IV: The Dream Master (1988)

Freddy Krueger (Robert Englund) draws his power from your fears, and as the Dream Master, he’s privy to all of your worst nightmares. Never has the fiend exploited someone’s particular fears so sadistically as when he transformed entomophobe Debbie Stevens (played by Brooke Theiss) into a cockroach. The scene where her arms break at the elbows, revealing insect-like legs within, still makes me cringe. Personality-wise, Freddy started coming out of his shell in Part III: The Dream Warriors, and by Part IV, he was in full on comic-trickster mode, cracking wise as he dispenses terror with glee. The juxtaposition of Debbie’s terror against Freddy’s elation is simultaneously horrifying and exhilarating.

The Transformation of Wikus Van De Merwe in District 9 (2009) 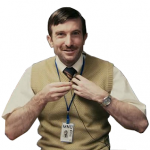 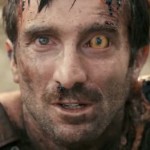 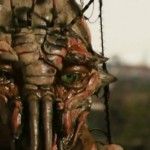 This a lot to dislike about Wikus Van De Merwe (played by Sharlto Copley): First of all, he’s a bureaucrat; he’s also nervous, abrasive, and relatively ineffectual. In a parallel-Universe version of South Africa, he’s employed as a “Relocation Coordinator” for a corrupt militaristic security firm called Multinational United that’s charged with overseeing a slum occupied by poverty-stricken extraterrestrials who washed up on Earth in 1982. The parallels to South Africa’s history of apartheid are numerous and intentional, which makes Wikus’s transformation deeply nuanced. When exposure to a bio-toxin begins turning him into one of the insect-like aliens he oppresses, he suddenly sees the world from the other side of the fence. It’s like a KKK member turning into an African American or a male chauvinist becoming a woman. The white elitist experiences the bigotry, violence, and subjugation that he himself once inflicted, making his a physical and a mental transformation.

Honorable Mention: The Transformation of Eren Yeager in Attack on Titan (2013-????) 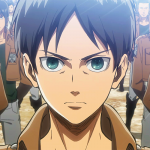 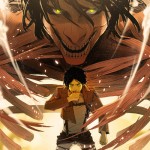 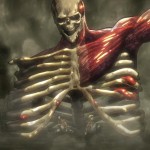 A horror group I participate in on Facebook was recently debating whether anime ever ventures into horror territory, at which point I instantly thought of the recent animated series Attack on Titan. In my opinion, Attack on Titan is scarier than The Walking Dead, Hannibal, and American Horror Story all put together; hands down the creepiest show in television. The series takes place in an undisclosed time in a parallel universe, one where mankind has been pushed to the brink of extinction by a hideous race of sexless, intellectually stunted giants with an insatiable hunger for human flesh. Eren Jeager (voiced in English by Bryce Papenbrook) is part of an elite military unit on the front lines of the battle against the behemoths, and, in a jaw-dropping mid-season revel, we learn that he can also transform into a dreaded “Titan”. While his transformation into a giant is nearly instantaneous, his reversion to human form involves tons of bone and flesh dissolving into steam. Eren’s extreme hatred of the giants makes his ability to transform into one both terrifying and tragically ironic.

What are some of your favorite human transformations in horror? Sound off in the comments section!