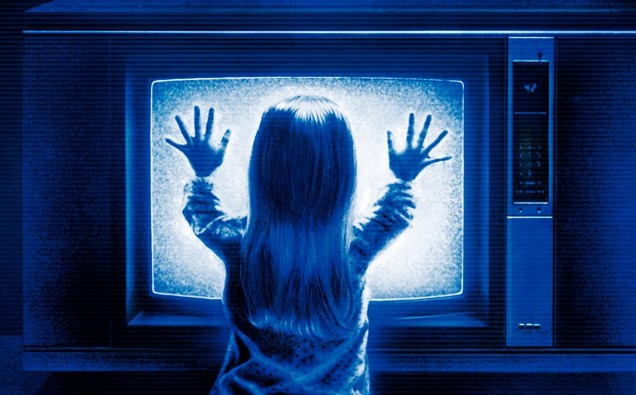 Horror fans can be obsessive about the films we love, re-watching our favorites until we know every line of dialog and every member of the cast and crew by heart. Certain films are so captivating, so visually arresting and/or packed with subtext, that they practically demand repeat viewings. And while plenty of films tell a compelling story, some have a behind-the-scenes history that’s just as interesting as the fiction. One such film is 1982’s Poltergeist.

While The Silence of the Lambs is lauded for bringing horror movies into the mainstream following the film’s sweep of the Oscars in 1991, Poltergeist really deserves the credit, having planted the seeds almost a decade earlier. Steven Spielberg and Tobe Hooper created a film that’s somehow both family-friendly and scary as hell (and, in 1982, this was an absolute first). Poltergeist entered popular consciousness in a way no other film had managed since The Exorcist, and its influence and cultural impact are still detectable today.

As we approach the May 22 release date for the Poltergeist Remake (or is it a sequel?) it’s a good time to look back at the original. Below are 10 of the most interesting facts about the film that I was able to dig up (pun intended). Enjoy!

The Poltergeist “Curse” is one of the most infamous urban legends ever connected to a movie production.   Dominique Dunne, who played the Freeling’s teenage daughter Dana, was strangled into brain-death by her boyfriend in 1982—the same year Poltergeist was released. Heather O’Rourke, who played young Carol Anne Freeling, died of intestinal stenosis in 1988. Lou Perryman, the actor who played Pugsley, was killed with an axe by a 26-year-old man named Seth Christopher Tatum in Austin, Texas on April 1, 2009; he was 67 years old at the time of his murder. 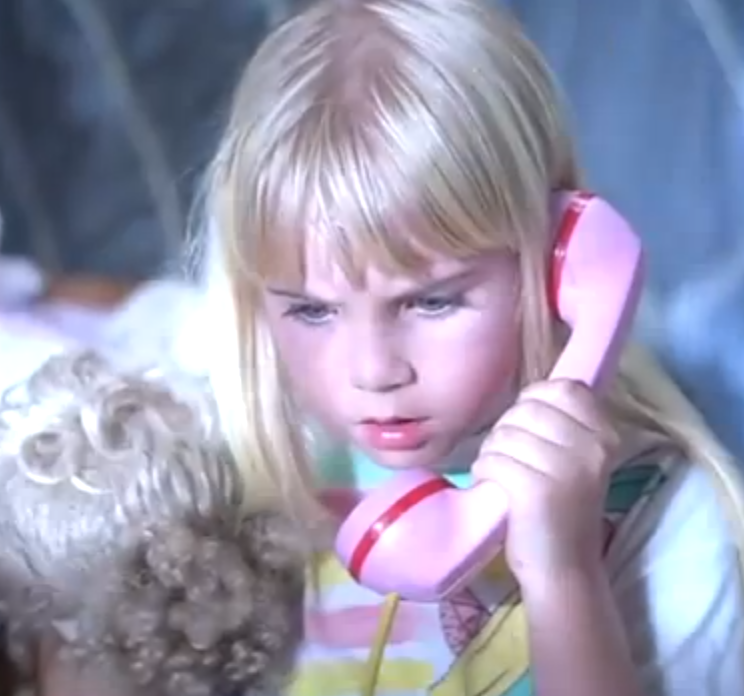 Some believe the curse’s origin is related to the fact that real skeletons were used during the filming of Poltergeist (because, ironically, real skeletons were cheaper than fake plastic ones). Other’s believe that O’Rourke’s death was foretold in the film: In the bedroom that Carol Anne shares with her brother Robbie (played by Oliver Robins) there was a poster for Superbowl XXII hanging on the wall. This game would not take place for six more years, when Superbowl XXII was played in San Diego. O’Rourke died one day after this game—also in San Diego.

On last interesting factoid regarding the Poltergeist “Curse”: O’Rourke and Dunne are buried in the same cemetery: Westwood Memorial Park in Los Angeles. 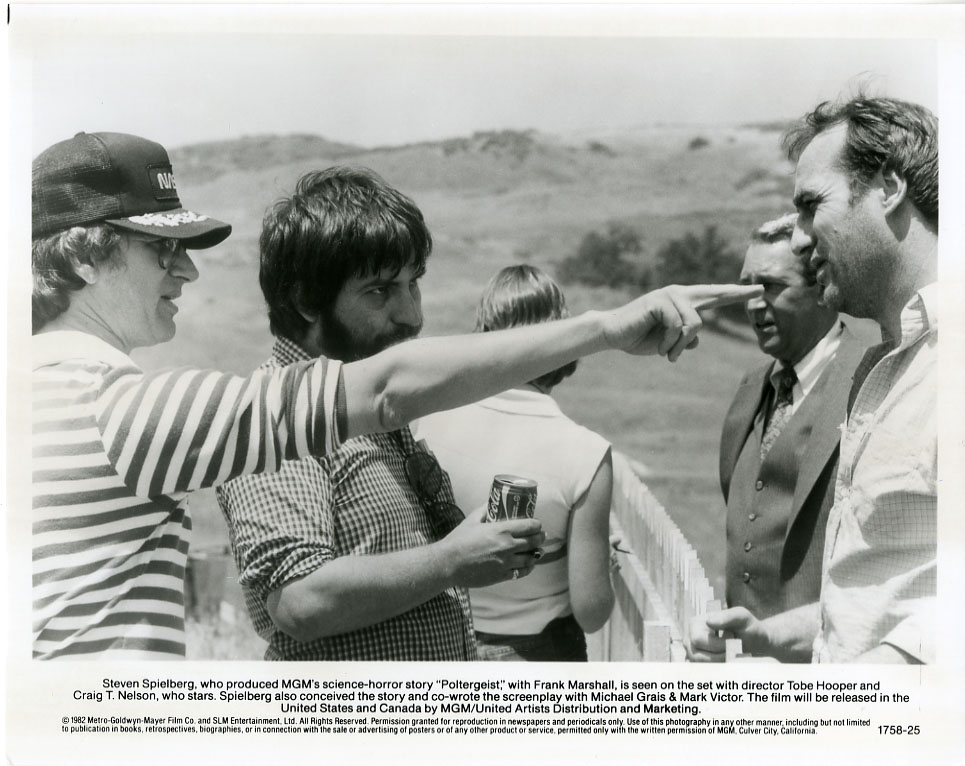 Time Magazine and Newsweek both dubbed summer of 1982 “Spielberg Summer” due to the fact that Poltergeist and E.T. the Extra-Terrestrial were released one week apart in June. Indeed, these two films are intrinsically bound in ways casual observers never realized. 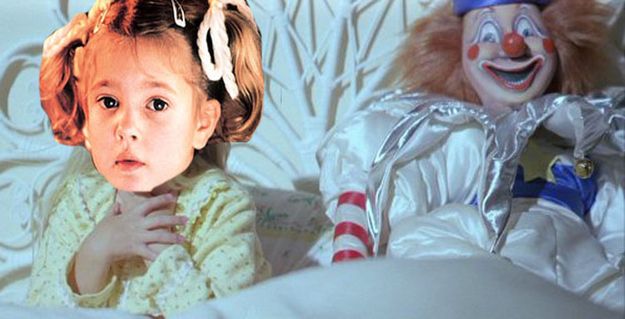 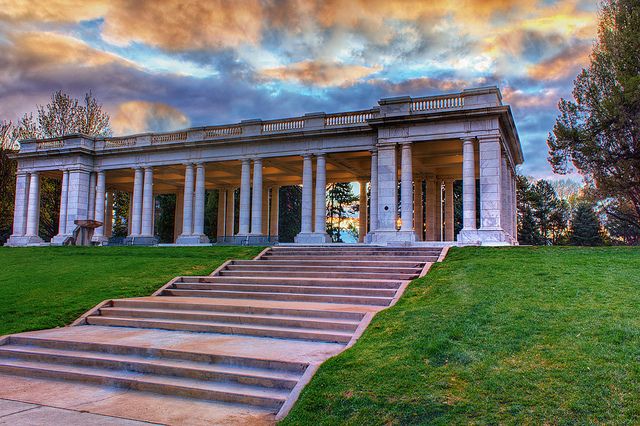 Steven Spielberg’s premise for Poltergeist was based on the history of Cheeseman Park in Denver, Colorado. The park was originally a cemetery, which was converted into a park during city beautification efforts in the early 20th Century. The man hired to move the bodies scammed the city of Denver into overpaying him, and the city quickly ran out of funds to pay for moving the dead. With no money left in the coffers, the city decided to simply leave the remaining ‘residents’ buried in unmarked graves underneath the sod. The park was completed as scheduled, but supernatural occurrences have been reported ever since. 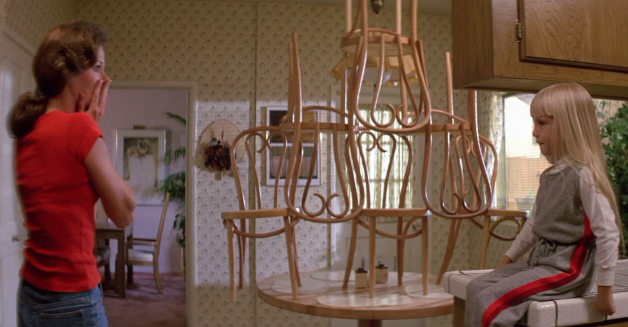 That scene where the dining room chairs position themselves into a perfectly balanced configuration was all done in one shot. As the camera followed Diane (played by JoBeth Williams) when she went into the kitchen to fetch some cleaning supplies, crewmembers rushed in to balance chairs on top of the table while simultaneously removing the chairs that were already on the floor. The effect is amazing and its execution was flawless—almost! When Williams bends down, careful examination of the reflection in the toaster shows the crewmembers at work.

Steven Spielberg hired Tobe Hooper to direct Poltergeist after being impressed with his work on The Texas Chain Saw Massacre (which Hooper both wrote and directed). And while this was unquestionably Hooper’s most mainstream gig at that date, rumors persist that Spielberg’s heavy-handedness as a producer made the director’s contributions practically nil. 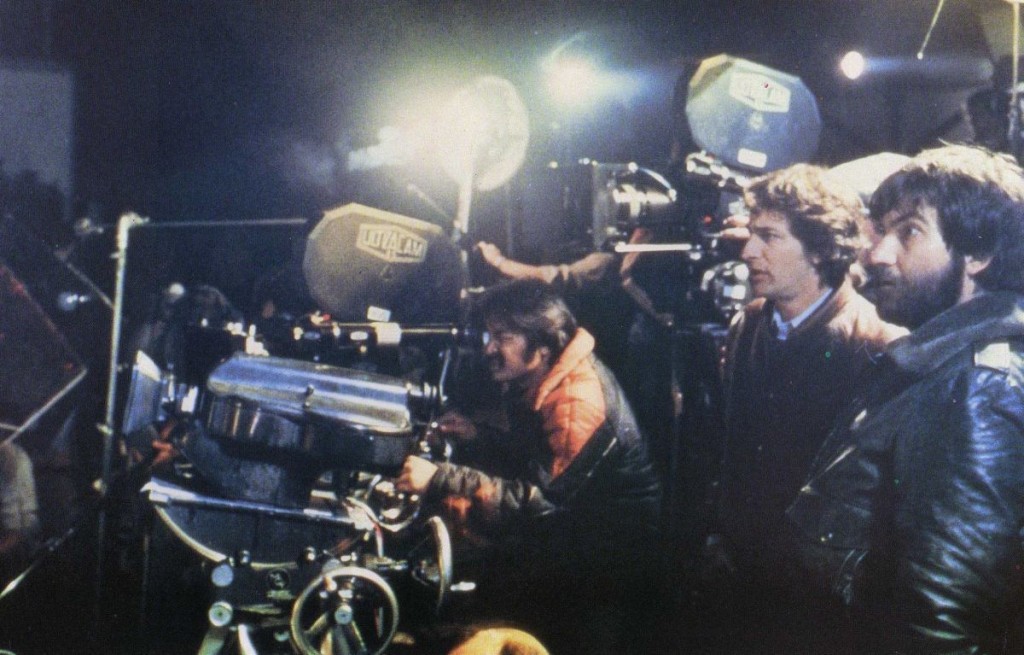 Is it me or does Tobe look scared?

When questioned about who had the greater control over Poltergeist, he or Hooper, Spielberg replied “Tobe isn’t… a take-charge sort of guy. If a question was asked and an answer wasn’t immediately forthcoming, I’d jump in and say what we could do. Tobe would nod agreement, and that became the process of our collaboration.” Co-producer Frank Marshall spoke out to the press and claimed “the creative force of the movie was Steven. Tobe was the director and was on set every day. But Steven did the design for every storyboard and was only absent for three days during the shoot, because he was in Hawaii with (George) Lucas.” Hooper later claimed that he did half of the storyboards. Spielberg then sent a letter to Hooper to clarify matters: “Regrettably, some of the press has misunderstood the rather unique, creative relationship you and I shared throughout the making of Poltergeist. I enjoyed your openness in allowing me…a wide berth for creative involvement, just as I know you were happy with the freedom you had to direct Poltergeist so wonderfully. Through the screenplay you accepted a vision of this very intense movie from the start, and as the director, you delivered the goods. You performed responsibly and professionally throughout, and I wish you great success on your next project.” Zelda Rubinstein [who played Tangina] disagreed. While Hooper set up the shots, it was Spielberg who made the adjustments, and most of the time, Hooper was “only partially there” on set. The issue then of who had creative control over Poltergeist is still a muddy issue even today. 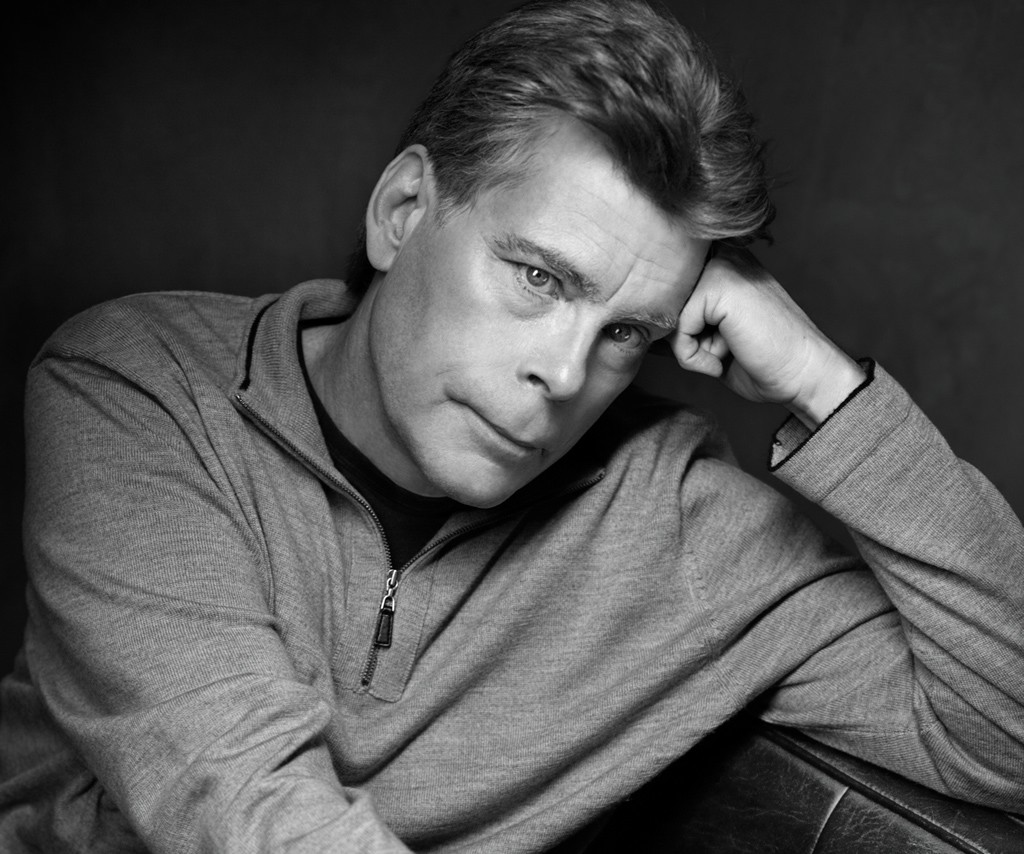 Stephen King was briefly approached to write the screenplay for Poltergeist (which would have been the first time King wrote directly for the screen) but, alas, all parties couldn’t agree on acceptable terms. While the script penned by Spielberg and Michael Grais obviously did the trick, I can’t help but wondering how a King-scribed Poltergeist might have faired?

Despite not being able to make a professional connection, Spielberg tips his hat to King with a clever “Easter Egg”: When Carol Anne sits in front of the TV in her parent’s room, the time on the set shows “2.:37”, an obvious allusion to “Room 237” in Stanley Kubrick’s film adaptation of King’s The Shining. 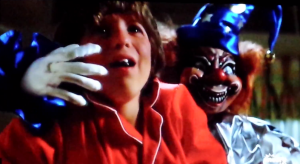 The evil clown that terrorizes Robbie in Poltergeist was born out of Spielberg’s own childhood fear of clowns—and has since gone on to infect generations of horror fans with acute Coulrophobia. The clown puppet used in the film now lives on permanent display at the Planet Hollywood in Caesar’s Palace, Las Vegas. 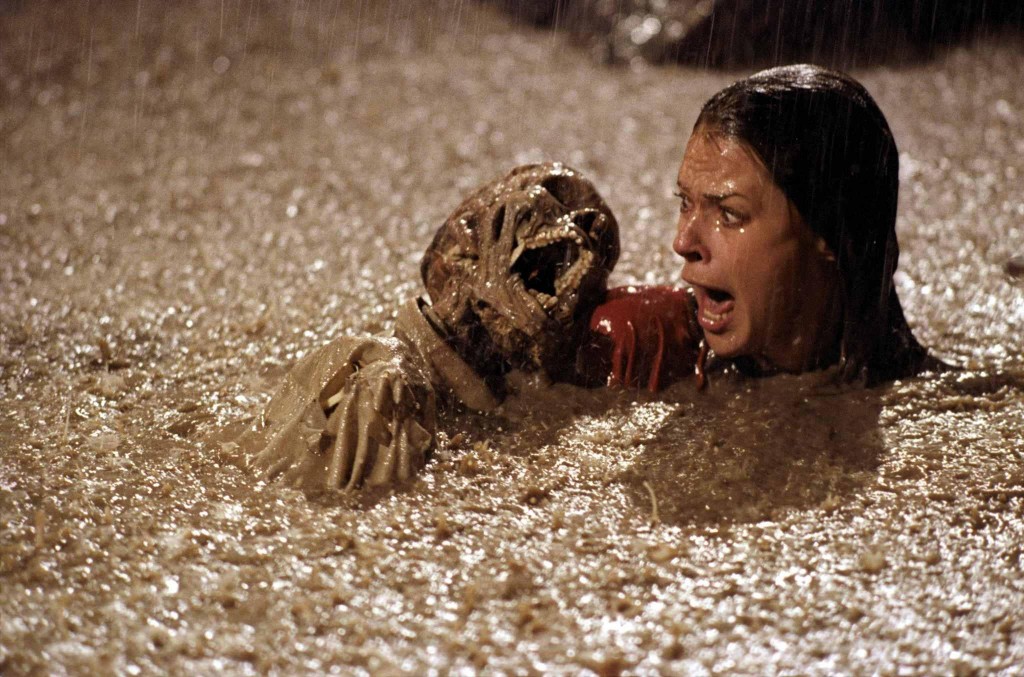 Related to the supposed “Curse”, several members of the cast and crew reported supernatural occurrences during the filming of Poltergeist.   JoBeth Williams claims she would come home from shooting every night to discover all the pictures hanging on her walls were crooked. She would straighten them out only to return home the next day to find them all once again askew. Zelda Rubinstein claims she was struck by a vision on the set one day: Her dog approached her and spoke the word, “Goodbye”. That same day, mere hours later, her dog passed away. 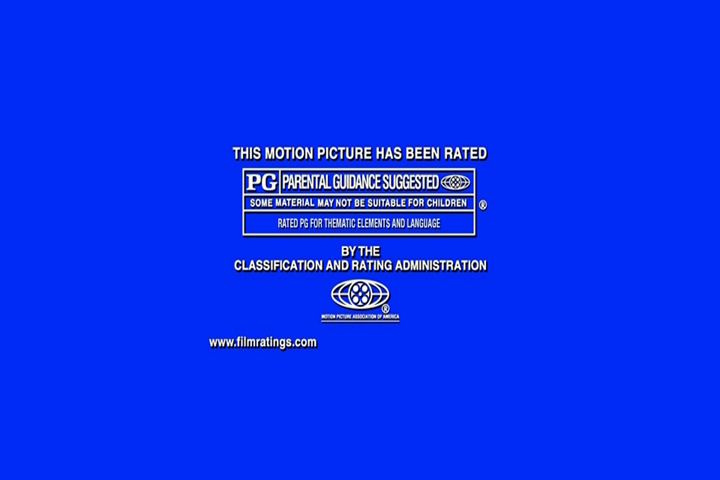 There’s a lot of debate these days regarding the effectiveness of PG-13 Rated horror movies, with many fans bemoaning the fact that the upcoming Poltergeist Remake won’t be Rated R. But how many people realize that the original Poltergeist was rated PG? It’s true! While the MPAA had originally slapped the film with an R (as PG-13 did not exist at the time) the filmmakers successfully petitioned the board for a PG Rating.

The only fatality in Poltergeist: Tweety

While Poltergeist was and is considered a deeply frightening film, it’s a rarity in horror cinema for the fact that not a single person dies in the movie. The only death in the film is that of Carol Anne’s pet bird, which may or may not be related to the story’s supernatural occurrences.

Did any of these facts about Poltergeist surprise you? What did you find the most interesting? Sound off in the comments section!