Count Dracula Sucks Blood. These Monsters Suck Something Else 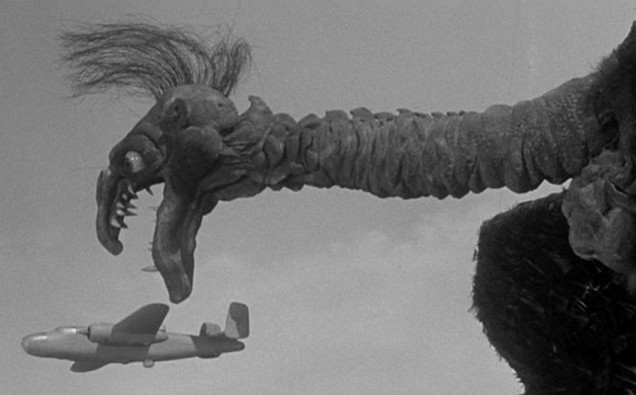 Man, there are some stupid looking creatures throughout the history of Cinema. When you think about it, The Blob is basically a giant wad of chewing gum. Admitably, you won’t be smiling much after it eats your laughing ass , but it still looks pretty damn ridiculous. So in the grand tradition of moronic monsters killing civilians, here are the top six most Dumb-ass monsters in horror history. 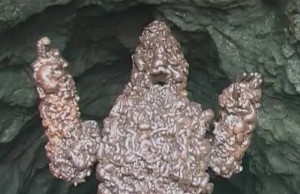 Ok, I fucking loved this movie, but its hard to deny the dumbassery of getting killed by a giant turd. The result of a serial killer merging with a vat of shit and nefarious chemicals, the Monsturd attacks when your at your weakest; pants down and straining on the porcelain throne. There are a few questions about how exactly a man-sized poop could even fit in a drainage pipe, but I know seeing this f*cker would scare me shitless. Its only thanks to the work of a few brave officers (and a couple jugs of pepto bismol) that prevent the annual Butte County Chili-fest from turning into a massacre. 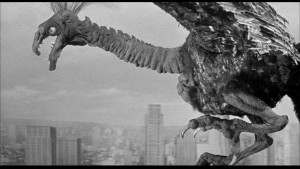 Imagine your a filmmaker, working on what you think is going to be your masterpiece. Sure, your previous work might not have been so well received, but this one is different; you feel it. The acting is good, the cinematography spectacular. All you have to do now is send it out for effects. And then when your baby comes back to you, its this fucking thing. 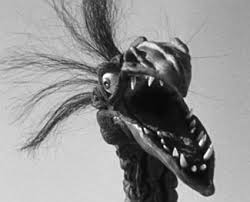 I mean seriously, the fuck is that? The googly eyes, the Albert Einstein hair, the TEETH. What kind of a goddamned bird has teeth? The filmmakers were mortified, but with no budget left, they had to ship the product as is. And with that, The Giant Claw went from forgettable creature feature to infamously, hilariously awful. Lesson is kids, don’t skimp money and farm out your special effect to Mexico. That shit will come back on you harder than a night of binge eating Taco Bell.

4. Bunnies- Night of The Lepus

Ok, these things are freaking adorable. I mean just look at them. The big floppy ears, soft fur, the beady little eyes; I just want to hug one and never let go. Thats not to say rabbits are always cute as anyone whose seen Watership Down can attest to. 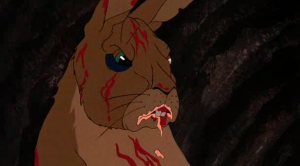 But the bunnies in Night of the Lepus are just normal rabbits. Normal, adorable rabbits. Alright, they are the size of a school bus, but that just makes them cuter. If I could show up to work on the back of a giants hopping Bugs, I’d never drive again. 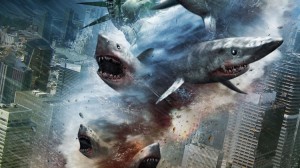 Does this thing even need an explanation? Calling sharknado a monster might be pushing it (its a tornado…. with sharks!) buts its my list so fuck off. The sheer lunacy of the idea combined with an awesomely insane performance from Z-list actor Ian Ziering might have made the film a hit, but it doesn’t excuse the dumbass-ness of this beast. To be sure, if a giant vortex throwing out great whites came anywhere my direction, i’d get the hell out, but come on. How do the damn sharks even survive? Don’t they need water to breath? Hell I don’t no ,and it hurts my head to think about it too hard. 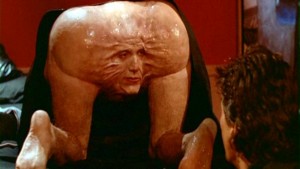 Society is a hell of a nasty film, with a final five minutes more barf inducing than even the nastiest of German pornography. Basically the rich in this universe are a different species, human like in appearance but actually made of a gooey ooze that lets them do things like this. 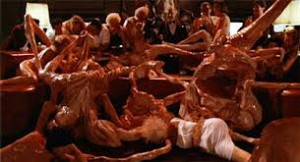 Butthead up there is just one of the forms these monsters can take. As silly looking as he is, there’s some disturbing implications. How does Butthead poop? Through his mouth? If that’s so does he literally put his food where he shits? On second thought this is actually pretty terrifying, even if the whole concept is a bit dumbass. Get it? Dumbass?…. Ill shut up now. 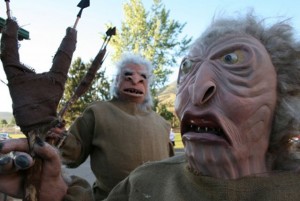 In the end there could only be one, and nobody could even hold a candle to the glory that is the Goblins of Troll 2. These nasty little creatures hang out in the town of Nilbog spiking people’s milk to turn them into vegitables, becasue in the Troll 2 universe Goblins are fucking vegitarians. Yeah, their in the same league as these guys 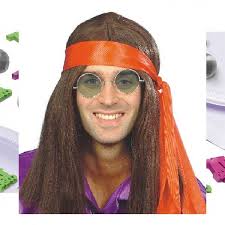 The only scary thing about Hippies is the smell.

The brighter minds might have realized by now that I haven’t mention anything about trolls. In a movie called Troll 2. That’s for the simple reason that Troll 2 features NO FUCKING TROLLS! Because why the hell would that make sense? Honestly, the goblins really need to be seen to be believed

I mean, just look at that. It looks like a meth smoking albino with a wig made of your grandpas pubic hair. And of course their led by this woman. 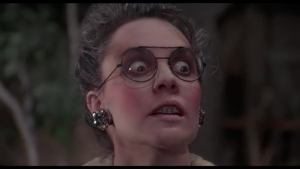 Well actually, she looks a lot like my ex-girlfriend. But still, the pure ridiculousness of this film eclipses all sensibilities, threatening to tear a hole in logic itself….. or until i die by repeatedly beating myself around the head with a hammer, whichever comes first. On that note, anyone know where I can find a Home Depot?