A.K.A The Best of the Rest 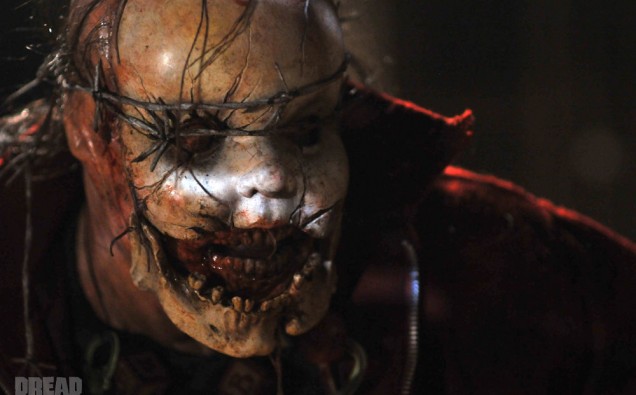 When you think of horror movie murderers, two aspects of them immediately pop to mind: their mask, and their weapon. Its unsurprising then that icons like Jason’s hockey mask, or Micheal Myers blank gaze have slashed their way into pop culture. But dig a little deeper, past the Leather and Ghost Face’s, and there is still a wealth of creeptastic masks that haven’t received the credit their due. Here is The Blood-Sheds Top 6 Lesser Known Masks in Horror Movies. 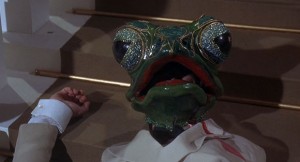 Dr. Phibes is a serial killer and all around nut, driven insane by the death of his beloved wife in this underrated British classic. Basing his kills off the ten Biblical Plagues of Egypt, this creepy ass mask is used in his 3rd murder, frogs. Rather than worn by the killer, the mask is instead the killer itself. Once turned on, it begins to slowly tighten until its wearer croaks. The Abominable Dr. Phibes was sort of like a classier Saw, decades before Saw was a thing, and the frog mask acts as more elegant alternative to a reverse bear trap. Scary to look at, scarier to wear, this head gear leaves an impact.

While this was by all accounts one turd of a movie, the killer still looks f**king terrifying. Technically this isn’t a mask, just a dude who cut his face open and badly stitched it back together, but I’ll make an exception in this case. The smooth, featureless skin is already unsettling enough, and the cut in eyes and mouth just make things worse. It’s the patchwork that really gets to me though, with stitches hanging from the open wounds. Smiley might have been a piece of shit film, but to its credit, it actually made an emoji kind of horrifying. 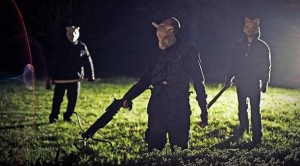 The simplicity of these masks is what makes them great. Cheap, plastic, held to the back of your head with a thin string; you could buy 10 of these things for a dollar at Wal-Mart. But the plain whiteness, slits in the nose and eyes, and the way all three interconnect to each other add up for a surprisingly creepy trio of killers. You don’t have to have a fancy headpiece made of human flesh to be a terrifying mass murderer. Just a dollar store mask, a blade of your choosing, and your ready to go. Classic and creepy. 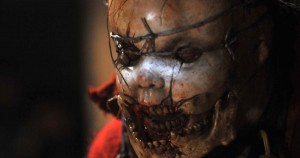 GAH! On the pure shit-your-pants-terrifying meter, Babyface has few equals. The cracked jaw, ugly piggish nose, and stained skin make for a hideous visage. I mean, you put the damn thing on by wrapping barbed wire around your head. Not even mentioning the killers poor dental hyfene, from a purely visceral standpoint, Babyface is a clear contender for the top. 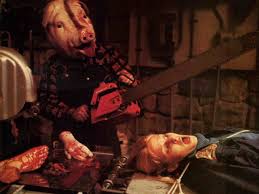 “It takes all kinds of critters to make Farmer Vincent Fritters.” Well, mainly human actually.  That pig mask up there isn’t so much a mask as a hollowed out boar head that ol’ Vincent haphazardly smashed his head inside. I’d imagine the smell alone would make it hard to concentrate on chainsaw wielding, but the good farmer makes do. Creepy looking as it is, there’s something about the knowledge that, at one point, the head was attached to an actual pig that makes it worse. I think I’ll be sticking to my chefs hat when I cook. Maybe it’s less flashy, but there’s a definite bonus that most chef hats aren’t made of rotting meat.

1. Featureless- Eyes Without a Face 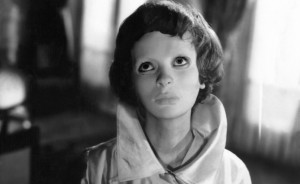 The inspiration behind Micheal Myers iconic look, and one of my favorite mask of all time famous or no, this featureless display from oft forgotten masterpiece Eyes Without a Face is elegant, beautiful, and bone chilling. Worn by Christiane after losing her own face in a car accident, the mask hides the mangled mess of her natural visage. In a world so obsessed with appearances, Christiane has to wear the mask, unable to even leave her house without its hidden protection. As complex and horrifying as other entries on this list are, its the simple sophistication that lands Eyes Without a Face the top spot.

Jeff is a writer for the Blood-Shed, and eats, drinks, and bleeds horror. You can help him publish his fist book here.