The Best of the New Millennium’s Worst 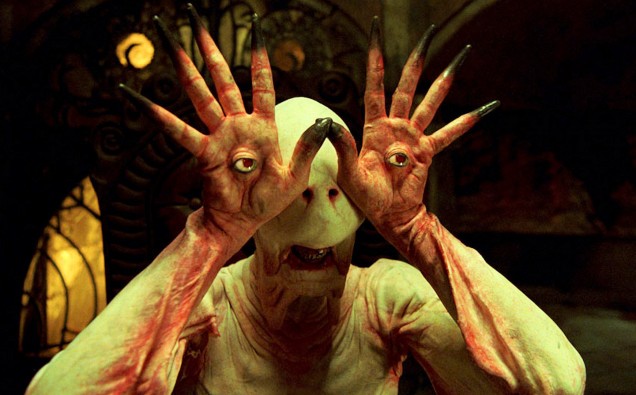 The noun “Creature” can be a huge umbrella in the horror genre, where one of the main themes has always been that human monsters are often the scariest. Freddy Krueger and the Cenobites are certainly creatures, but they were once mere men and women. For this list, however, I’m setting more finite parameters, focusing on being that are something totally outside the realm of humanity; no werewolves, vampires, or missing links.

Be they disconnected from our phylum, from beyond our galaxy, or on an altogether different plane of existence, the list below represent the greatest examples of horror movie creatures. Enjoy! 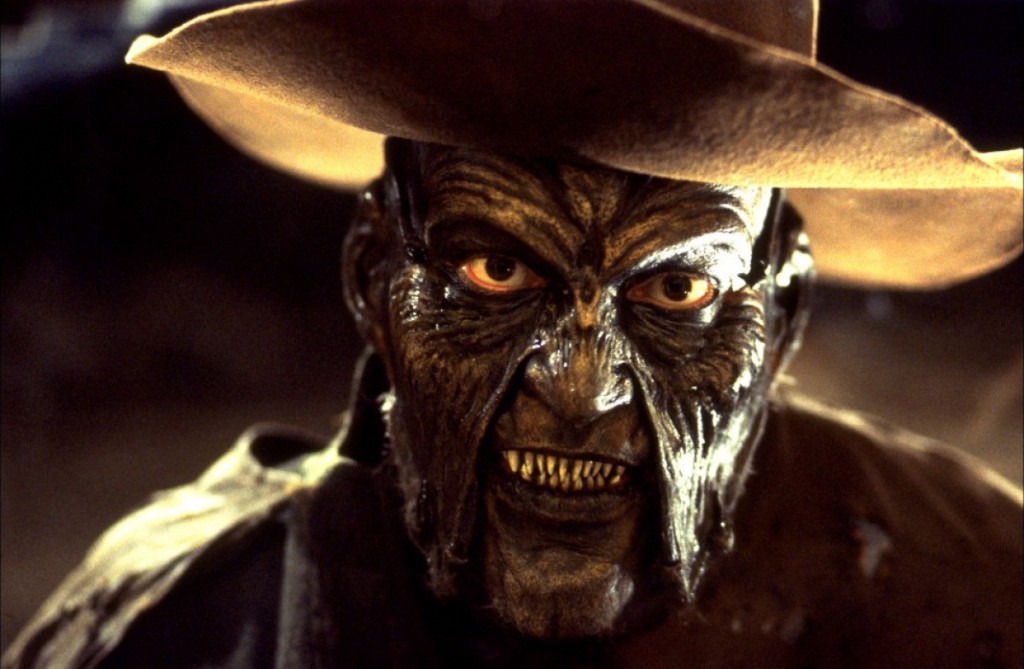 Every 23 years for 23 days… it gets to eat. Where it comes from, we may never know, but he would certainly fit in among the hosts of Hell. Though he stands upright and dons a coat and hat, his humanity is coy a rouse. Reptilian in form with regenerative abilities, The Creeper kills out of necessity and the pure joy of the hunt. Watch out for his super-charged, armored pick-up truck, and keep your eyes on the skies—this demon’s got wings.

The Tentacled Aliens from Monsters (2010)

Before delivering Godzilla to the masses in 2014, writer/director Gareth Edwards introduced a battalion of captivating yet chilling aliens in his debut film Monsters: Immense, elusive beasts who hide in oceans and waterways by day, emerging nightly to reign havoc. In an effort to contain this threat to humanity, the entire northern half of Mexico is placed under quarantine. While terrifying by design, a mating ritual proves both tender and endearing—and hella trippy.

The Impossibly Tall Monster from The Mist (2007) 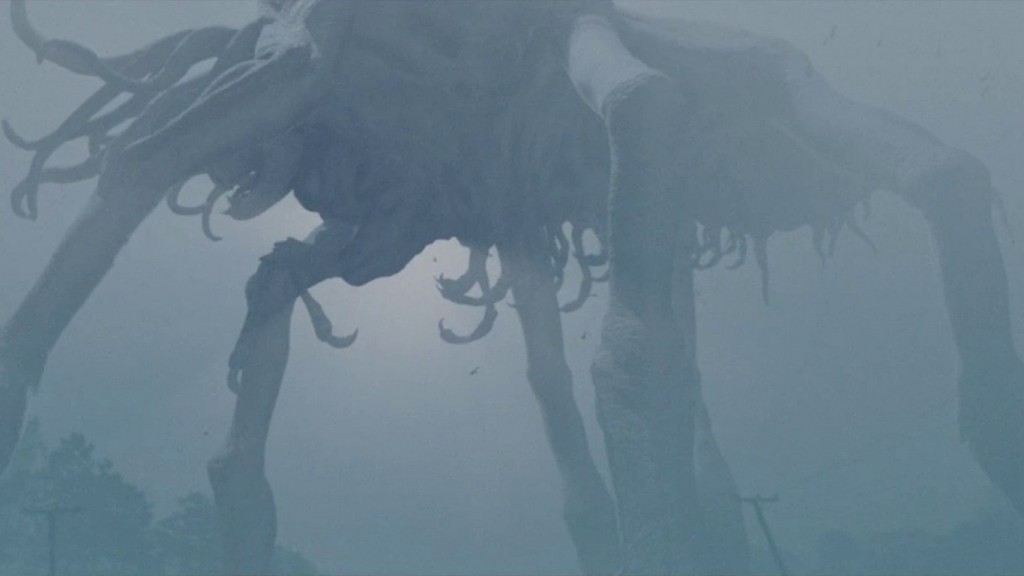 In a film overflowing with terrifying creatures, one stands above the rest–many dozen stories above! A small group of survivors make a desperate decision to leave the comparative safety of the super market, driving almost blindly into the insidious mist. The sounds around them hint at unimaginable terrors. As dawn breaks, a rare gap in the haze reveals an impossibly tall monster, a beast whose immensity seems to defy the very laws of physics.

Pumpkinhead from Pumpkinhead: Ashes to Ashes (2006) 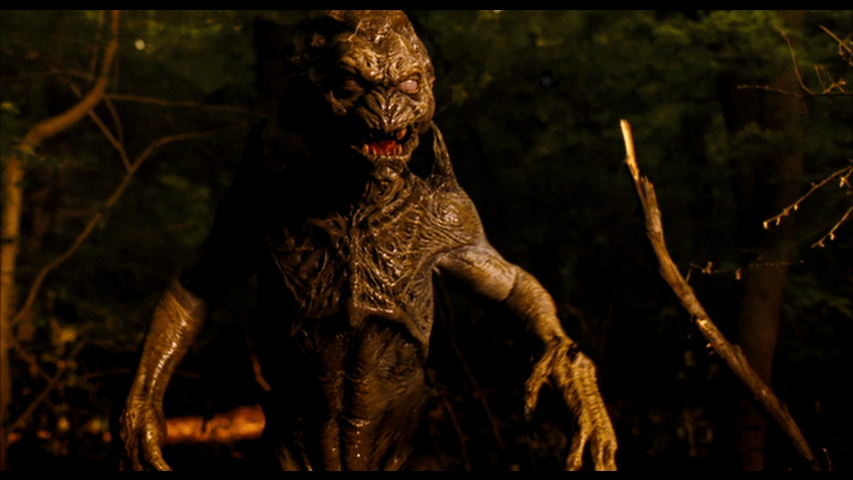 While born in the late 80’s, the vengeance demon known as Pumpkinhead endured into the 21st Century through a made-for-TV movie that’s surprisingly true to the to the tone of the first film. The story of a mortician throwing bodies in a swamp as opposed to cremating them is inspired by the real-life scandal at the Tri-State Cemetery in Georgia. Lance Henriksen returns as Ed Harley, a man tragically bound to the hideous fiend. Pumpkinhead’s hulking, knotted body and fiendish countenance make him a horror icon for the ages.

The Xenomorph from Alien vs. Predator (2004) 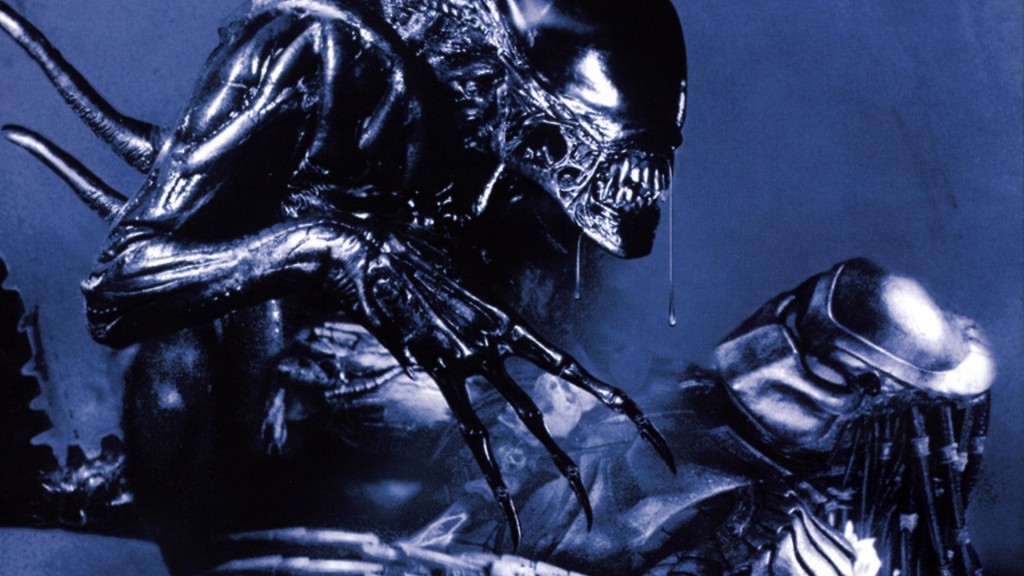 Although their moniker is practically meaningless (derived from the Greek words “xeno” meaning “alien” and “morph” meaning either “form” or “mass”) no creature has inspired more consistent high-caliber thrills over the past four decades than the titular Aliens from the Alien Franchise. The plot of 2004’s AvP pushes back mankind’s relationship with the insectile monsters by many centuries, placing the otherworldly beasts on Earth since pre-history. Biomechanical and filled with acid, is any creatures as cruel, merciless, or terrifying? 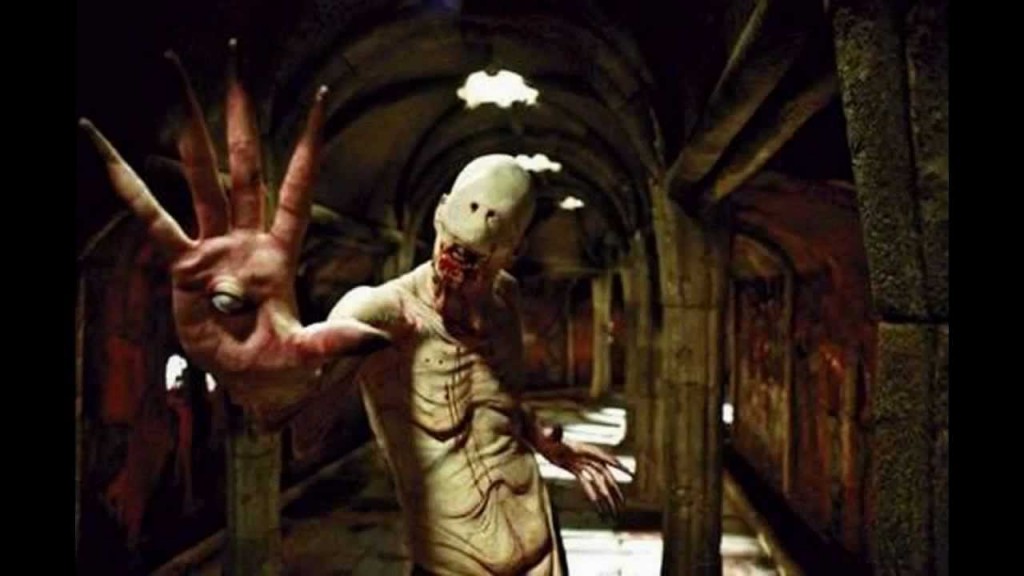 Even in his dormant state, sitting statuesque at the head of a table laid with a sumptuous feast, the Pale Man from Pan’s Labyrinth is one of the most arresting fiends of the 21st Century. Daring to nibble even the smallest morsel will awaken the monster with disastrous results; first he places an eyeball into the palm of each hand, then—he attacks. Leave it to the mind of Guillermo del Toro to bring us a monstrosity straight from a child’s nightmare that’s hardcore enough to rattle most grown-ups.

The Monster from Cloverfield (2008) 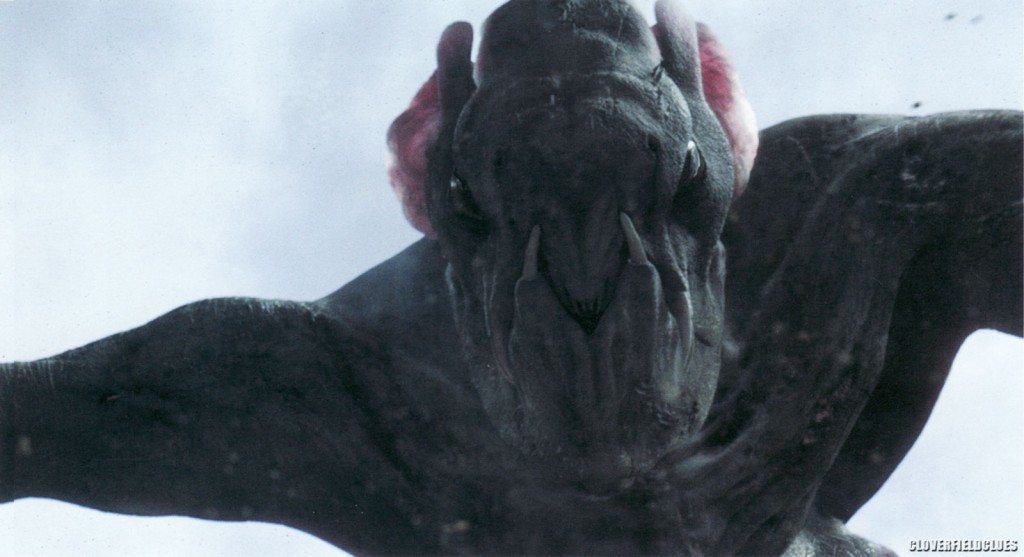 America’s answer to Godzilla decimated Manhattan in the summer of 2008, lodging itself firmly into mainstream consciousness. From space perhaps, or the vast ocean’s depth, the origin of this reticulated behemoth remains unknown; the devastation it wrought: clearly a metaphor for the events of 9/11. Almost as terrifying as the Lovecraftian beast itself are the wolf-sized, infectious arachnoids that fall from its body like lice. 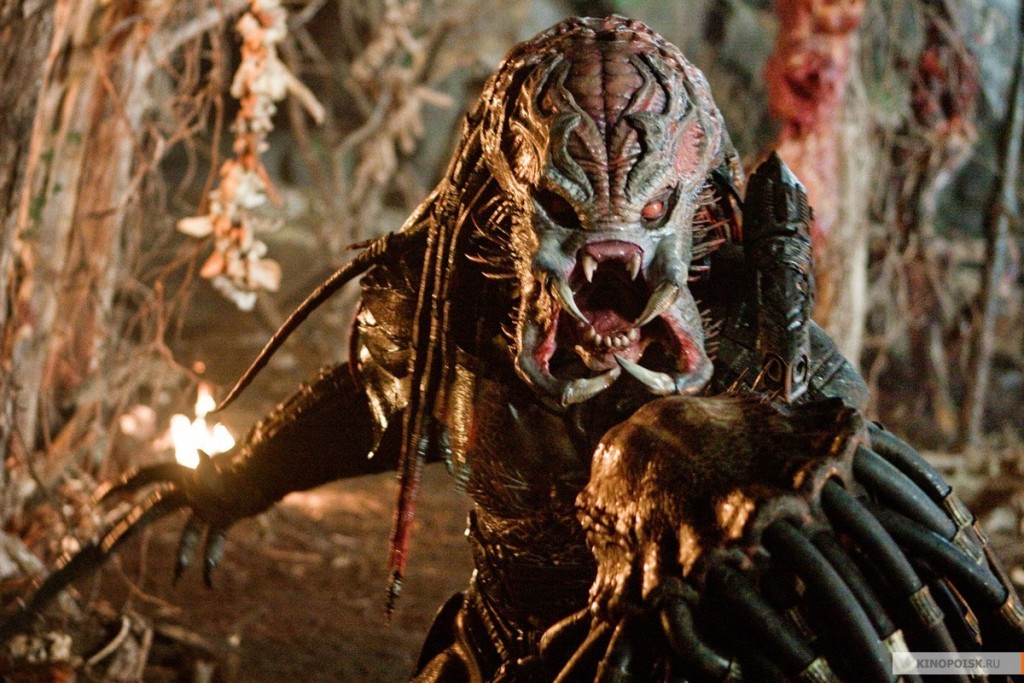 A trip to the Hunter-species’ home world in 2010 revealed that “Predator” is a phylum unto itself, complete with dominant and subservient genealogies; so in addition to battling with humans and xenomorphs, they viciously brutalize each other. These dreadlocked super-raiders are horror icons with a vast, untapped mythology, making these beasts born in the 1980’s likely to endure for decades more to come.

The Subterranean Carnivores from The Burrowers (2008) 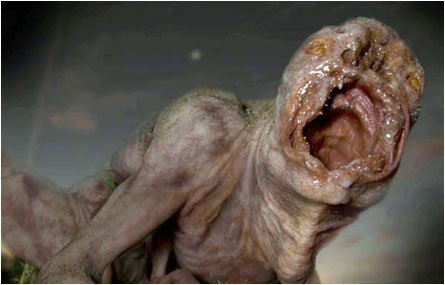 Equipped with a stupefying toxin, add these gruesome mole-like cryptoids to the list of unknown creatures of old American folklore. These efficient killers subsided on buffalo, rarely making their presence known to the natives—until pioneering White Men came along and slaughtered their entire food supply in the name of Manifest Destiny. The fact that these hideous “Burrowers” turn their killer urges against those responsible for their hunger adds a militant conservationist subtext this species, not unlike Godzilla himself. 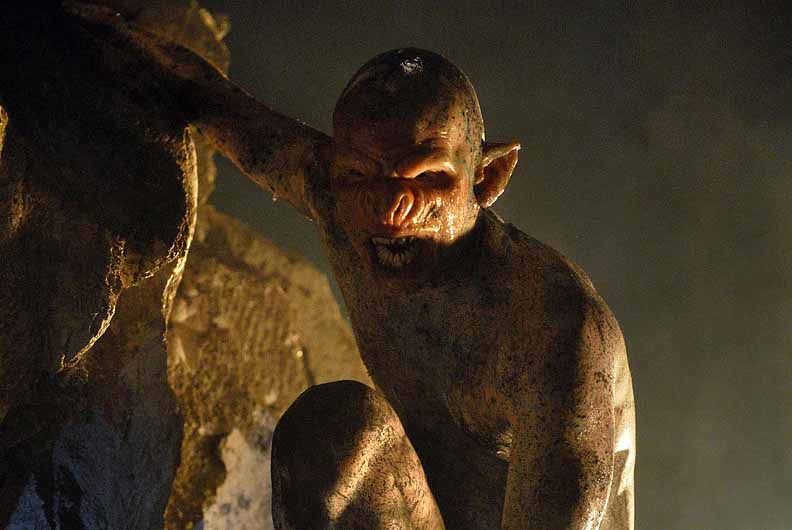 Claustrophobia is the least of your worries should you venture into the uncharted cave systems of North Carolina: Beware the Gollum-esque troglofaunal flesh-eaters referred to as “Crawlers” in Neil Marshall’s terrifying masterpiece, The Descent. With dead membrane eyeballs, bat-like ears & noses, and naked skin both translucent and slimy, these creatures are terrifying to behold and usually deadly when encountered. The only defense against these adept, organized group-hunters seems to be strength, skill, and nerves of steel.

What or who are your favorite creatures from 21st Century horror? Let me know in the comments section.