Just when you think there is no more life within the 'zombie' subgenre a film comes along that instills a glimmer of hope.
by Cameron Scott April 5, 2017 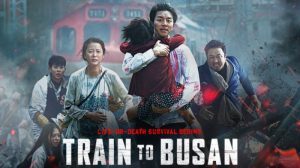 Just when you think there is no more life within the ‘zombie’ subgenre a film comes along that instills a glimmer of hope. That glimmer of hope comes along in the form of the 2016 Korean film ‘Train To Busan’ from director Sang-ho Yeon. This is the first time live action feature film from the director whom had directed solely animation previously.

It’s one hell of a ride (no pun intended) from start to finish. I’ll try to keep this as spoiler free as possible but proceed with caution.

The plotline is fairly simple and straightforward, but that’s not to say that it isn’t complex at the same time. The film begins in the opening moments of a zombie outbreak/pandemic as it starts raging across Korea. A father begins a literal ride of terror and survival with his young daughter in tow on a train full of survivors barreling from Seoul to Busan where they believe the last bastion freedom awaits them.

Normally I am not what the kids call a ‘fast zombie’ type of fella. It’s just not my thing. That being said this is a ‘fast zombie’ flick, and it works on every level. For the filmmakers to use any other variety of flesheater just wouldn’t work here. There is something inherently gratifying and creepy at the same time in how these zombies actually move. A fresh and interesting approach and it adds to the kinetic frenzy of action that this film follows at a brisk pace that rarely lets up. 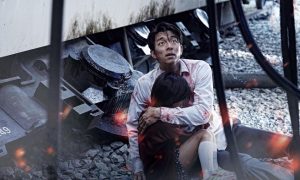 There is an array of characters for you and the zombies to sink their teeth into. This is also another aspect of the movie that makes things click and work. The characters are given moments to be a little more than just cannon fodder which is a rare treat in a film of this ilk. There are heroes and yes even a human villain element. What would have most likely been turned into just ‘Die Hard On a Train With Zombies’ by a less talented cast and crew instead comes off as a horrific character driven piece with people that we care about (most of them) and want to see get to their final destination no matter what they do. You’re invested. These characters are not overblown but rather quite real and while you’re along this ride with them you’re with them all the way.

That ending though. That ending will rip your heart out and show it to you.

In the end I see “Train To Busan’ as a movie about hope and holding onto that in the face of impending doom while fighting against seemingly impossible odds. I would have loved to see this on the big screen proper but it is available streaming on Netflix and multiple other outlets.