Tremors 5: Bloodlines is a delight for fans of the franchise!

Can we bring back the TV series already? 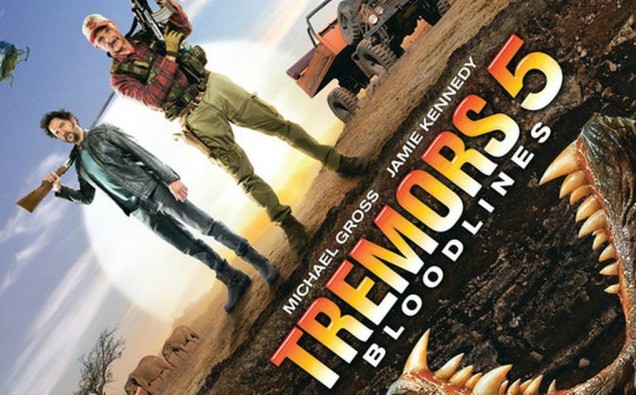 I am just a huge fan of monster movie franchises where they use really well developed creatures. Where they almost develop an entire science around  fictional animal. Like Aliens, for example. I love the entire franchise in all of its mediums. The Xenomorphs are an extremely well developed creature with an entire life cycle and biology. Well, the same goes for the graboids in the Tremors films.

I saw the first Tremors when I was in middle school and loved it instantly. I was always excited when I found out another sequel had been released. I even loved the TV series and to this day mourn not getting the chance to see El Blanco eat a mixmaster mutant and in turn mutate into some new horrible monstrosity.

A Tremors 5 film had been in the works ages ago, rumored to be titled Tremors 5: Thunder Down Under. Supposedly it would take place in Australia and see Fred Ward and Kevin Bacon return alongside mainstay Michael Gross. But it went no where and was canned. Very recently, it came to light that they were making this film and, to be frank, I sort of danced around my apartment for a bit upon hearing the news. And just today 10/6/15, it was released.

Tremors 5: Bloodlines takes place in South Africa and it the first time we have seen the series set in a continent other than North America. It seems that graboids and assblasters are loose and killing a bunch of people and a man from the South African government seeks out the legendary Burt Gummer to help them.

Now, I know most Tremors fans are asking “is there a new form?” Well, yes… and no. There is not a new stage in the lifecycle of the graboid introduced, but let’s just say that an animal found in North American and Africa, even the same species, will not be the same from one continent to the next. As one of the characters states, to put it very bluntly, “Everything is bigger in Africa.”

The movie is going to be a treat for fans of the series. The monsters are there, the gore is there, the humor is there, and of course Burt Gummer himself, that man who is a strange mix of badass and hilarious insanity. Some of the effects are no longer where they once were, but that is too be expected. A franchise in it’s 5th film naturally cannot afford a 20 foot animatronic like it may have been able to in its youth. So, yes, there is a lot of CGI, but I stomached it back with the TV series and frankly, with developing technology, the CGI here blows a 12 year old TV series budget out of the water.

Great movie, another awesome, stupid-fun addition to a stupid-fun franchise. Here’s hoping the rumors of a 6th film are true! I will watch!