This B&B from hell is not on my list of romantic vacation destinations! 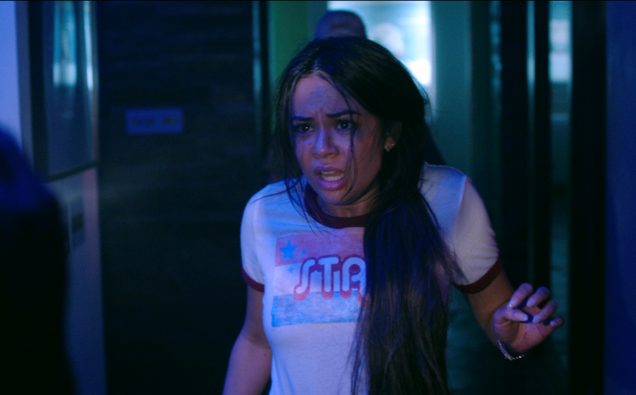 Home invasion movies terrify me. I’m always a little paranoid of who might be outside looking in my window. Real people who want to do bad things to innocent people are so much scarier to me than supernatural Hollywood monsters. Now in the case of Trespassers, not all the cast members are truly innocent, quite the opposite, but they still didn’t deserve what they got. Well, maybe a little. 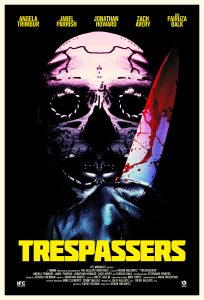 Synopsis: Two couples rent a gorgeous house in the desert for an escape from reality—a doomed vacation that quickly escalates into a bloody fight to survive.

The film opens with a couple that is not doing well at the hands of some masked abductors. Who they are we will eventually figure out, but for now, they are just two unlucky folks!

Cut to young married couple Joseph (Jack Avery) and Sarah (Angela Trimbur) arriving at a rental property for what looks like a romantic vacation in the desert. The house is mysteriously unlocked, and as one of the coolest houses I’ve seen in a long time, this would have been a giant red flag- DON’T GO IN! But of course, they do. As they explore the chic modern oasis in the Mohave, Sarah finds a darkroom and an enlarger with what looks like a photo with a masked guy in it. Hmmm. Could they be the ones from the beginning?

Wait…. There is a knock at the door. Sarah has invited another couple, high-school BFF Estelle, (Janel Parrish) and her obnoxious, coke-sniffing boyfriend Victor. (Jonathan Howard) This was a bad plan and the sexual tension and anger in the house multiply as the evening drags on. There is already a problem with our hubby and wife and the presence of Estelle and Victor make it worse. Sarah is obviously upset with Joseph, and they are not going to work out anything with these party animals around. 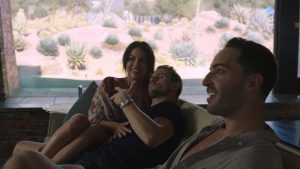 As tempers fly, alcohol is guzzled and the tension grows, there is another visitor at the door. Don’t answer it they all say, but sweet Sarah can’t help herself and answers the door. The woman at the door, (Fairuza Balk) only listed in the credits as “The Visitor,” says she is a neighbor, her car broke down and can she use their phone? That seems sketchy, and she is acting kinda strange, but again, Sarah wants to be the better person and lets her in.

I really enjoyed seeing Fairuza Balk again. If you haven’t seen her in The Craft, well you are missing out, she was terrific. She doesn’t have a huge part here, but I loved her. Her quirky, smart aleck and odd character was entertaining and a great relief from all the couples’ angst and drama. The Visitor and Victor get into it badly, because she doesn’t seem to be planning to leave anytime soon. She does not fare well in the battle. 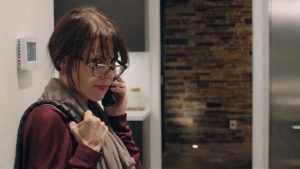 Police are called, everyone is paranoid, the fighting gets worse and things start looking very grim. From the moment the police walk in, it feels wrong. At this point, things go to hell fast and furiously. The protagonists are in a lot of trouble and never find a way out.

According to director Orson Oblowitz, Trespassers is supposed to be a giallo type film, inspired by the films and words of Dario Argento. “From the beginning, we wanted to elevate the home invasion genre, to operate within the usual genre framework while also putting a microscope on characters terrorized not solely by violent intruders but by each other as well…. I found the paranoia, confusion, and violence in the film, to be my catharsis to deal with the contemporary socio-political purgatory we, as Americans, find ourselves in.” 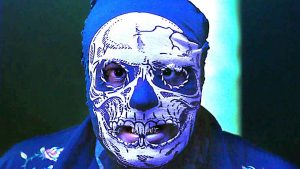 The film looked gorgeous, because of some terrific cinematography and the acting was honestly some of the best I’ve seen in this type of film. I really felt their fear! But as far as being the deeply political, giallo nightmare it aspired to be, I’m not sure it quite made it up to that level.

The basic terror and paranoia about someone coming into our home, that I mentioned at the beginning, was very much the core of this film. For that, I feel Trespassers puts itself firmly on the list of must-see home invasion films. The neon-bathed and bloody scenes were lovely, the practical SFXs were terrific and the acting all around was stellar.

Oh, I gotta mention my stand-out for the film: Carlo Rota, as the police officer you do not want to show up at your house. He was so good, and his performance was my favorite, alongside Fairuza Balk!