There's nothing heroic about what I do. It's dirty work. 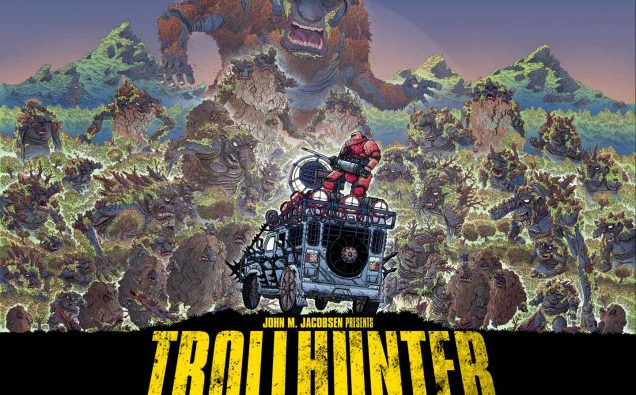 There are a lot of different types of horror movies, and when making one it’s hard to decide on exactly what kind of “Monster” you want your movie to be about.  The decisions you make going into your film will determine your audience.  You have your Slasher films, where the killer just cuts a bunch of people up because they’re having a particularly bad day, if that’s not your thing maybe instead you need those 2 hour-long gore films that are really just glorified snuff,  or maybe you like your horror to come from beyond the grave.  A tortured spirit is always a good choice. 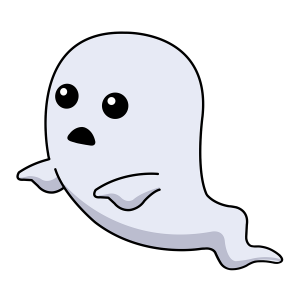 Maybe none of that stuff is your cup of tea and you want to maybe consider taking the old curse road, or maybe a monster would be good.  The point is making a horror movie that stands out is like, so hard you guys.  Most of the time directors will go for the tried and true genres and popular icon monsters because they are already established as scary and so it’s a done deal to assume they will still be scary ten movies later.  Director André Øvredal chose a different approach for his 2010 film Troll Hunter and pulled his monster right out of Nordic and Scandinavian mythology which is as old school as you can get.  However, when someone sees the word troll, they are reminded of goofy riddle masters who pull a Gandalf on Billy goats and humans alike should they try to cross their precious bridge.  Others might think of those cute little genitalless naked dudes with rainbow hair. 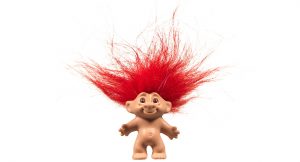 Trolls have a bad reputation of being unthreatening trouble makers, and that can doom a movie early on, I mean Trolls offer so very few options that you either anticipate really short dudes in rags causing havoc by hiding the T.V. remote batteries, or CGI so bad it makes Zoombies look good by comparison.  I assure you that is not the case with Troll Hunter, which actually surprised me.  I realize this movie has  stacked deck against it, for starters it is a foreign film.  I realize for some people, that doesn’t matter but to the general public, and those who hate to read while watching a movie it’s a good reason to avoid it.  Second it is a found footage film, this means it is in the same category as Cloverfield, V/H/S, and The Blaire Witch project, and while I personally am not a fan of this genre I won’t deny that V/H/S was an amazing film. 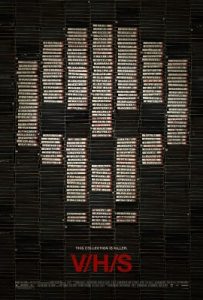 This movie could give Tim Burton nightmares

The last con this movie has is that it is about trolls, I mean seriously, how dangerous could a troll be?  Their biggest concern is running out of hair scrunchies, so maybe they go on a murder spree to steal more hair accessories?  The truth is by now most people have lost interest between subtitles, shaky cameras, and a disbelief trolls were ever scary, they might think that watching a peep explode in a microwave would be more entertaining.  The thing is, they would be wrong, this film works not because it’s so good it makes up for its flaws, but because of the way the flaws become positives.  After watching this film I don’t think I could have enjoyed it as much as I did if anything had been done differently.  The film is described as a “Dark Fantasy” movie and features a cast of known norwegian comedians and unknown actors.  The movie is about three college students who are trying to track what they think is an illegal bear poacher to make a documentary about him. 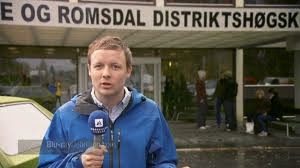 The students take several interviews with local hunters who explain that the bear population is fragile, so only a handful of people ever get a bear hunting license, and go on to threaten the supposed poacher.  They manage to track him down at a campground where he promptly tells Thomas, played by Glenn Erland Tosterud to get lost.  After he goes inside his trailer Thomas and friends take some footage of the dude’s vehicle which has massive scratches torn through the side of it, like a giant claw took a swipe at it.  That, or he was out Messin with Sasquatch.  They decide to ignore him and instead hang out, watching his camper from a secure location, a term that here means “In plain sight.”  Despite this our intrepid “Bear poacher” Hans, played by Otto Jespersen leaves into the night with our second string Mystery machine not far behind.  Some how Thomas looses him on a two lane road with no side streets and the crew are forced to go back to the camp. 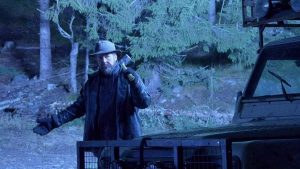 They confront him several times, each time he tells them to go away.  They continue to follow him because learning isn’t something college students do apparently.  They get lost in the woods and suddenly Hans leaps out of no where, yells “Troll!”  And proceeds to run away.  There isn’t enough light or steady camera to see whats going on, remember they’re running.  What we hear though is all kinds of fun sounds, growls, trees breaking oh, and Thomas getting hurt.  Thomas later says it was a bear but Hans knows better.  Thomas manages to annoy this guy so much he finally caves and agrees to let them tag along to kill whatever it was that attacked Thomas. 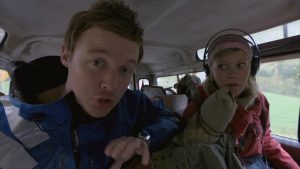 This is the face of persistence.

After a brief refresher at the campgrounds it is night and the crew are seen waiting for Hans to pull up.  When he does he asks if anyone here believes in God.  They act as though this is a normal question a bear hunter asks before taking you out to revenge kill the bear that attacked you.  Kalle, played by Tomas Alf Larsen makes a sarcastic remark about bears “Being able to smell Christian blood” but he’s right, the thing they are going to kill which Hans knows is not a bear, can in fact smell Christian blood.  Hans tells them what they are going after is Trolls and these guys seem to go along with it.  Hans orders them to bathe in the lake and then get “All greased up” with “Troll Stench.”  Once that is done they trek into the woods where we meet our first troll. 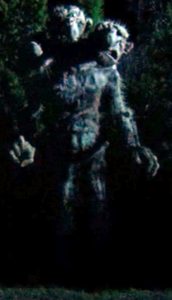 “Hi, I’m a Tosserlad. My hobbies include growing heads and killing people.“

Before you say “Look how goofy that thing is” it is only the first troll we see, and the majority of its onscreen time is in night vision, which helps to distort it enough that it seems less cheesy than it is.  The Tosserlad chases them through the forest but eventually is stopped and turned to stone by Hans, armed with high power U.V.B lights.  Morning comes and we see that Hans has connections to the government, a representative of said government named Finn, played by Hans Morten Hansen shows up to create a scapegoat for the mess left behind by the troll.  They drag out a dead bear and leave it in the area the troll was in so they can declare a bear was killing the nearby live stock.

“Framing bears to hide the existence of trolls is what I do.”

The movie focuses not just on the fact trolls are real, but the conspiracy to keep them a secret from the public.  We also learn about troll types and a little bit about their anatomy and behavior which is kind of like a cryptozoologist’s wet dream.  Some time later the group is seen tracking a “Bridge Troll” the movie adapts that goofy bridge troll theme but they do it in the most metal way possible, this guy isn’t about riddles he’s all about killing.  We first see him as nothing but a massive arm that strikes out from the darkness of the bridge, snatching up a full-grown sheep in its massive claws.  Hans then shows up in a suit of armor intent on getting a blood sample from our massive brute of a troll. 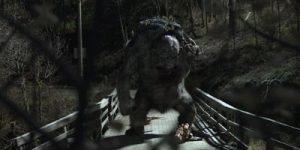 After Hans gets his blood sample the team goes to several sites that are known and controlled troll territory.  Most of which are still safe and contained, but during one hike they find troll tracks that lead into a cave, that appears to possibly be an old mine shaft.  They venture down into its depths to discover a troll nest.  Hans says there is a whole clan living down there and promptly decides to leave, unfortunately as they are attempting to exit the cave a whole mob of trolls start shambling towards home.  Trapped in the cave they hide in a pocket in the wall to wait until the sun rises.  Kalle has a panic attack because he’s a Christian and when he starts to sweat the trolls sniff him out.  Just inches from safety Kalle is grabbed and killed by the trolls. 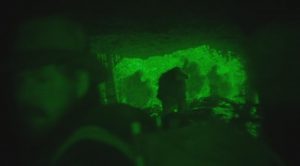 Kalle was a victim of troll gang violence.

They get a new camera person and go off, deep into troll territory where they stop at some power lines in the middle of no where.  Hans explains they are actually electric fences designed to keep the trolls at bay.  For some reason this little play on already existing structures amuses me.  I am reminded of childhood imaginations, making up fantastical reasons for every day mundane things.  Either way it was a quick way to make your movie seem larger than it is without foot ball stadiums of field and insane budgets.  They pull the stunt again when they see a group of goats in the mountains, claiming they are food for the trolls.  Each time it is a reminder that this movie stars a cast of comedians. 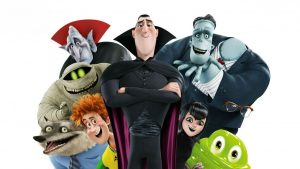 It would be like what Adam Sandler did only scary.

They take shelter in a cabin where Hans reveals that in the 70’s he was ordered to exterminate every last troll in a territory, including, the children.  He recalls it woefully and describes it as a “massacre.”  They reach the final showdown with the troll they’d been tracking and the scene is pretty epic, from driving between his massive feet to blowing him up with a rocket launcher, unfortunately the celebration ends abruptly when Finn shows up to take their footage.  The last we see is Thomas running before it ends.  As far as mockumentaries go, this one is unique, and entertaining.  It has its humor, but at its core has a fear in it, what if they were real, what if they all broke out, what if one is looking through your window right now?  The world may never know.