As the series neared its conclusion, the idea of major characters being permanently killed off became chillingly plausible 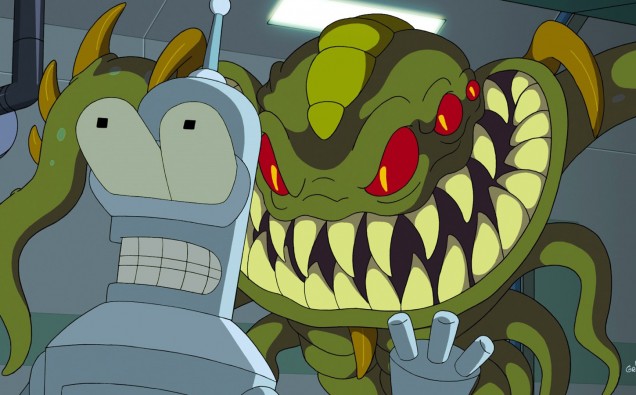 Welcome to entry number two in my sporadic series on those stories where the horror content surprises an unwary audience.  Previously covered: 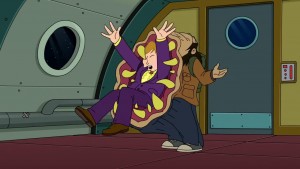 The monster is revealed and McMasters meets his fate

Today, we’re going all the way back in time to August of 2013, when Comedy Central aired the 24th episode of Futurama season 7 (that’s production seasons; it was episode 11 of season 10 in terms of broadcast). In “Murder on the Planet Express,” in-group bickering pushes Professor Farnsworth to take the entire crew (including brand new character Jackie Jr., apprentice to Scruffy the janitor) on a corporate team-building retreat, to be lead by business consultant Dan McMasters. However, en route to the retreat, McMasters insists that they pick up a hitchhiker and bring him aboard the ship. The hitchhiker transforms into a monster, devours McMasters, disappears into the ventilation shafts and shuts off all the power. The crew splits up to try to track the creature down, but things take a turn for the worse when it is revealed that the ravenous monster can take on the shape – and the voice – of any one of them. 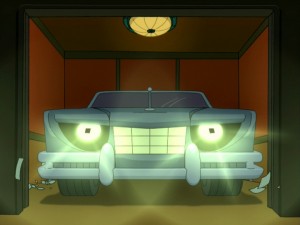 Referencing and parodying horror movies is nothing new to Futurama. Back in season 2, for example, the episode “The Honking” (the title a reference to The Howling [1981]) was a robotic take on a werewolf story, with Bender cursed to transform into a vicious, feral automobile. “Murder on the Planet Express” is something very different, though. First off, it opts for much darker humor and a more straight-faced presentation in its take on both Alien (1979) and The Thing (1982). Secondly, because it came just two episodes before the series finale, the usual television policy of returning to the status quo by episode’s end was no longer necessarily in place. This close to the end, there was the very real possibility that these characters could be killed off. 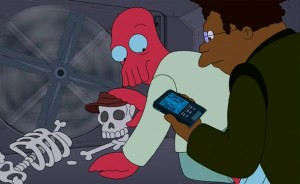 The remains of Jackie Jr.

The first victim, McMasters, has no real emotional significance to the viewer – this is the kind of obnoxious character we usually anticipate and enjoy seeing awful things happen to on a show like Futurama. The next to go, unsurprisingly, is Jackie Jr., who was obviously introduced just to be killed off. Again, no real emotional stakes there, no real fear for the audience. 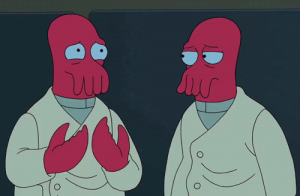 One of these Zoidbergs cannot be trusted, perhaps?

However, in the third act of “Murder on the Planet Express,” things take a genuinely scary turn. This is when the monster begins disguising itself as various crew members and killing off beloved members of the supporting cast. The series of surprise revelations about the monster’s disguises are startling, and, as I mentioned above, the stakes feel very, very real – normally, it would go without saying that somehow the plot would be contrived so that everybody would come out okay before the closing credits roll – because, this close to the end of the series, the obligation to make sure every character survives is no longer strictly in place. 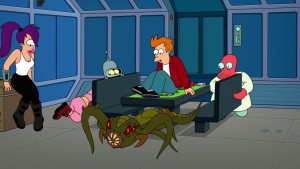 Cowering from the monster

So, as members of the Planet Express crew drop off like flies, and we join them in trying to figure out which one of them might, at any moment, turn out to be the monster in disguise, the paranoia and fear are surprisingly effective.

Futurama is a great series, which consistently demonstrated an ability to play in just about any genre and to wring not only laughs, but pretty much the whole gamut of human emotions out of its audience. It flirted with and referenced horror on plenty of occasions, but never did it delve as deeply into the genre as in “Murder on the Planet Express,” which is honestly one of the best works of sci-fi/horror to come out in recent years.

You know you love horror, so keep on reading The Blood Shed, and check out our Facebook page!