Universal Studios 2016 ‘Halloween Horror Nights’ are Beyond Your Wildest Scream

Universal Studios in Hollywood and Orlando are well known for their spectacular Halloween Horror Nights! Every year they break records for sell out nights and have bigger, scarier and... 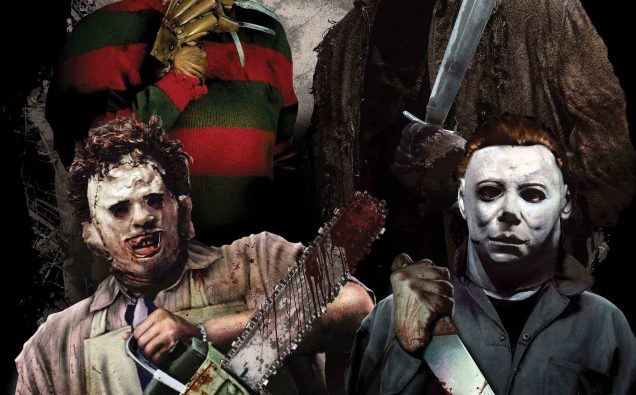 Universal Studios in Hollywood and Orlando are well known for their spectacular Halloween Horror Nights! Every year they break records for sell out nights and have bigger, scarier and more elaborate mazes than the year before. In 2016 they are raising the bar even higher with the unbelievable amount of different horror favorites represented in the park all at one time. The twisted minds behind the nation’s best, most intense Halloween event will bring to life some of the scariest and most nightmare-inducing horror films and TV shows in history.

The first announcement was that John Carpenter’s Halloween would be back, with different scenes and more Michaels than last year. But not just one slasher- we get the four most terrifying names in horror, together! Freddy Krueger, Jason Voorhees and Leatherface join Michael Myers. In Freddy vs. Jason, demented killer Freddy Krueger from A Nightmare on Elm Street, returns to the scene of the crime, this time accompanied by notorious hockey mask killer Jason Voorhees from Friday the 13th to inflict twice as much terror. Inspired by New Line Cinema’s 2003 film that brought together the biggest horror icons in history, this new experimental maze thrusts guests into an epic battle in which the fate of only one killer will survive.

The unspeakable terror embroiled within The Texas Chainsaw Massacre: Blood Brothers maze, based on Tobe Hooper’s original film, will pit guests against the unsavory wrath of the demented killer, Leatherface, and his mentally unhinged brother, Chop Top, as they unite in misery to expand the family’s cannibalistic enterprise and slaughter a new generation of innocent victims. With the perverse duo at the helm of a grotesque BBQ restaurant staged inside a dilapidated roadside gas station, unwitting guests will soon realize that new terror awaits as the blood brothers continue their hedonistic prey on human flesh.

Escaped mental patient Michael Myers makes a homecoming return in Halloween:  Hell Comes to Haddonfield, an all-new maze inspired by the second film in the classic Halloween horror franchise. Echoing the infamous words uttered by the film’s Dr. Sam Loomis, “You can’t kill the Boogeyman,” the twisted maze will shed new light on the terrifying lunacy of Michael Myers as he scours the streets of Haddonfield and stalks the halls of Haddonfield Memorial Hospital in ruthless pursuit of his victims. 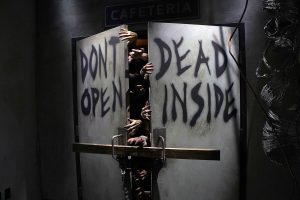 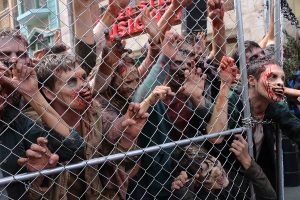 Do we get walkers too?? Of course we do. The Walking Dead Attraction just recently opened and the permanent attraction is a hit for regular guests at the park and will be open for Halloween Horror Nights too. Enter the post-Apocalyptic world of AMC’s The Walking Dead. Prepare to fight for survival in a fully immersive journey as you navigate through a world overrun by hungry walkers. Follow in the footsteps of the human survivors as you battle your way through nightmarish iconic landscapes that bring the most popular cable TV show in history to life.

The next reveal: The Exorcist: For the first time ever, supernatural thriller The Exorcist, will take possession of Halloween Horror Nights in an all-new horrifying maze. Revered as one of the scariest movies of all-time, The Exorcist earned its place in history as the first horror film nominated for an Academy Award for Best Picture. The maze will recreate some of the film’s most haunting scenes, ushering guests into its unparalleled terror as if their very souls were possessed by the devil. 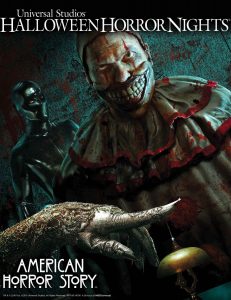 Not enough terror for you? Next Up: American Horror Story! This is one of my favorites and I can’t hardly wait to see it! One of the most horrifying and wickedly gruesome shows in television history is bleeding off the screen and into your nightmares. Twisted scenes from Murder House will unleash the evil spirits that possess the Harmon estate, spiraling guests through decades of the tortured dead who previously resided there.  In Freak Show, guests will join a troupe of biological misfits in a sinister sideshow where they’ll be stalked by the murderous and deformed Twisty the Clown. Finally, guests will succumb to the warped desires of The Countess after checking in to the haunted Hotel Cortez, conceived from the beginning as a torture chamber for its customers. 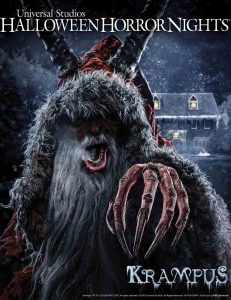 You want more? You got it! Another new sinister maze this year is Krampus. The dead of winter sets the stage for the terror that’s about to unfold one cold, dank and dreary Christmas Eve as the fabled anthropomorphic “half-goat, half-demon” horned creature emerges to terrorize those devoid of holiday spirit.  In scenes lifted from the film, guests will navigate the dysfunctional Engel family home to encounter the evil ancient spirit of Krampus – the dark shadow of Saint Nicholas – and his band of Dark Elves and sinister Gingerbread Men, who cause the family to fight to see the light of day. 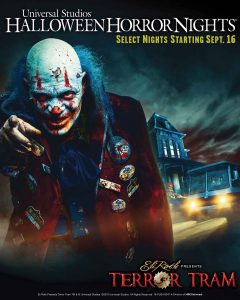 Wow, still not enough for you? How about let’s have Eli Roth, best known for Hostel, and his digital network Crypt TV take the helm of the infamous Terror Tram, marking the first time ever that the signature attraction comes to life through the twisted mind of the filmmaker. Eli Roth Presents Terror Tram will expose guests to the fabled legacy of serial killer clown Hollywood Harry, the story of a former jovial celebrity clown turned depraved murderer, and the minefield of carnage he left behind.

Wow!!!- Universal is certainly pulling out all the stops and letting the blood pour this year, in what is destined to be the most amazing Halloween Horror Nights yet! I would suggest getting your tickets fast, because they are going to sell out quick!