Even 166 years after his death, the legendary poet is remembered on his birthday. 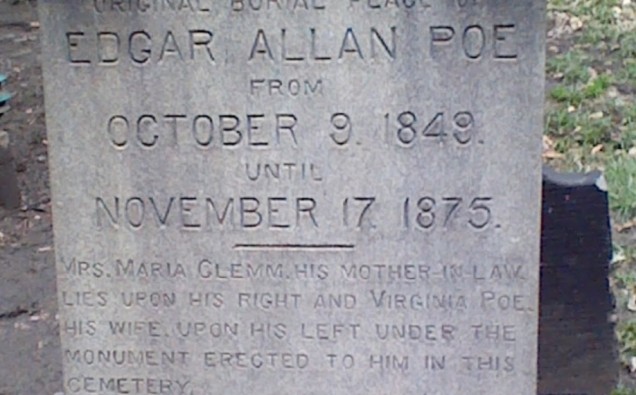 Edger Allen Poe was an author, poet, editor, and critic. Best known for writing short stories of mystery and the macabre, Poe has influenced literature around the world.

Poe was born January 19, 1809 and died in October of 1849. It is speculated that alcohol, drugs, tuberculosis, and heart disease were all contributing factors to his death.

When Poe was originally buried he was placed in an unmarked grave. Over the years the site became overgrown with weeds.

Neilson ordered a marble headstone for the grave. The headstone was in the process of being carved, but was destroyed when a train flew off its tracks and into the monument yard.

A second stone was never ordered.

In 1865 Sara Sigourney Rice began organized a movement to raise money for a new monument for Poe.

Through donations of pennies from students, friends, and other supporters half of the money was raised by 1871. The other half was donated by George W. Childs in 1874.

The monument was dedicated on November 17, 1875. The remains of Virginia Poe were brought to Baltimore and added to those of Poe and Maria Clemm in 1885.

In 1913, Orrin C. Painter placed another stone intended to mark Poe’s original burial site in the churchyard. For unknown reasons the stone was originally placed outside of the Poe family lot.

It is rumored that the memorial committee failed to exhume Poe’s body and move it to the end of the grave yard behind the church. It is possible that in the confusion another person’s remains were exhumed and lie beneath the headstone.

I live in Baltimore so I visited Poe’s grave yesterday on his birthday.  The cemetery is located on the corner of West Fayette and Greene Street.

Here are some pictures I took.

The church is enormous; it was very difficult to get a vantage point for a one shot frame. I took a few pictures while dodging traffic on the busy corner. 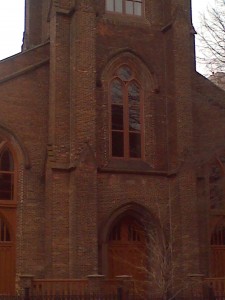 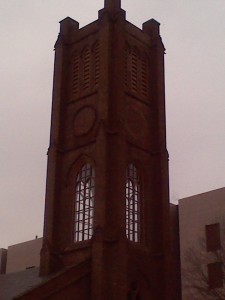 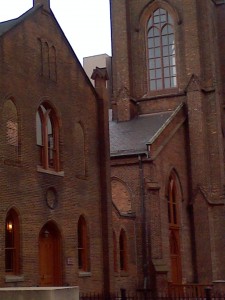 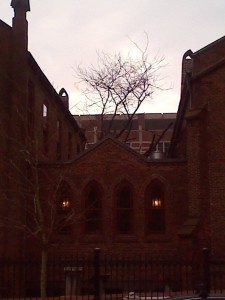 Here is a view of the cemetery and the memorial from outside the gate. 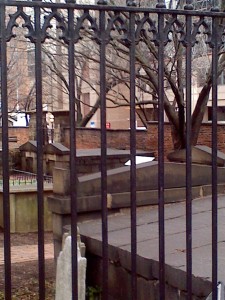 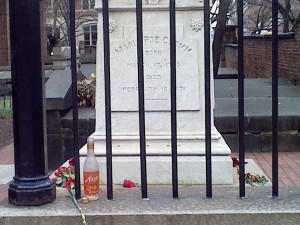 Every year, pennies and flowers are left out of respect on Poe’s birthday. 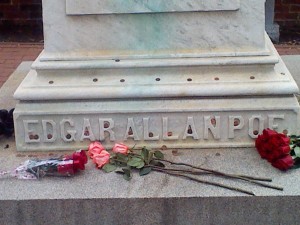 The walkway that leads behind the church. 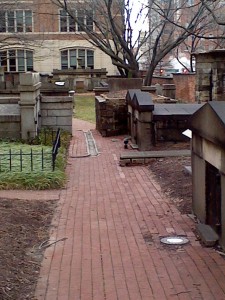 Mausoleums and other grave stones. 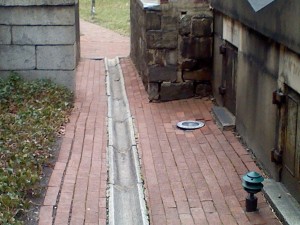 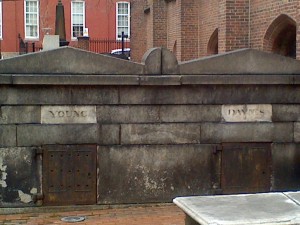 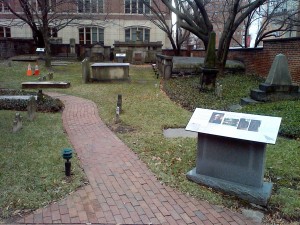 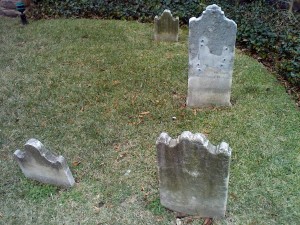 The path leading behind the church up to Poe’s grave. 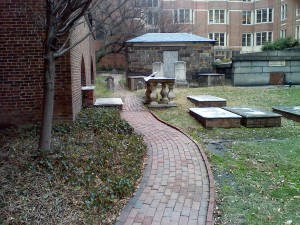 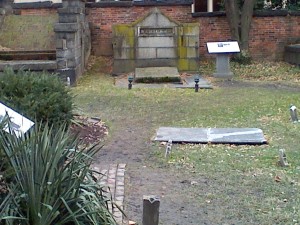 The Edger Allen Poe headstone, and some family member plots. 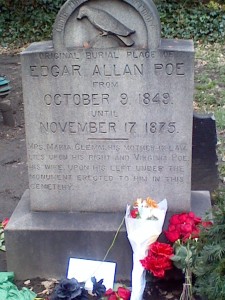 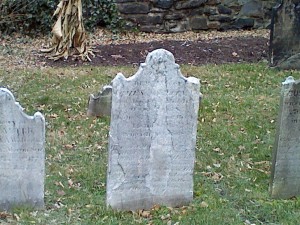 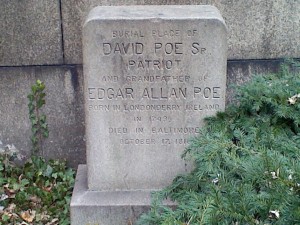 On Poe’s birthday in 1949, an unidentified man known as “The Poe Toaster” entered the cemetery and left a partial bottle of cognac and three roses on Poe’s grave.

The three roses are believed to represent Poe, Virginia Clemm, and Maria Clemm. Out of respect, no one ever questioned or attempted to hinder the man.

This devoted tradition continued each year until 1993 when a note was left stating “the torch will be passed”.

From 1993 till 2009 two young individuals continued the tradition. In 1999 a note was left stating the original “Toaster” had passed away.

In 2012, Jeff Jerome of the Edgar Allan Poe Society officially declared that the original tradition ended.

Even 166 years after his death, the legendary poet is remembered on his birthday. Poe is adored by the residents of Baltimore, and by many people that were influenced by his writing.

Edgar Allan Poe and his works have appeared throughout popular culture in television, film, and music. The Baltimore Ravens football team and mascot are named after his infamous poem “The Raven”.