Volumes of Blood: Horror Stories: Bloodier the second time around! 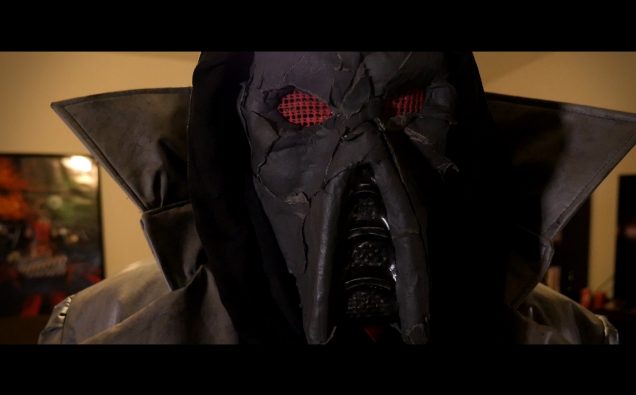 A while back, I reviewed an indie horror anthology film called Volumes of Blood. It was a creative and well made film which still left me with a couple of complaints. Recently, I was able to take a look at the sequel, titled Volumes of Blood: Horror Stories. Picking up right where the wrapper for the first film ends, this film delves into a new batch of stories. While the first film centered around a library as the shared theme (“Volumes”? Geddit?), this film focuses on stories all taking place within the same house.

The wrapper for the film is a realtor showing some people a house. As they are guided through the home, they encounter evidence of a violent past. Each time they do, the realtor explains away whatever they find and we are then treated to a short vignette showing what actually happened. Mysterious stains on a kitchen knife or the cellar floor bely a very violent history.

The film is very well made. The gore is spectacular and I really loved the costume design for the antagonists. One sore point was that the acting is a bit uneven, seeming to be a bit of a step back in spots over the first film. The story itself is more focused, however. My favorite vignette was one involving an old timey couple of aging serial killers, the spitting image of the stereotypical doting, all american husband and wife. Think Flanders from The Simpsons. It was very entertaining!

Overall, this is another solid anthology film. Definite one to check out for fans of the format!