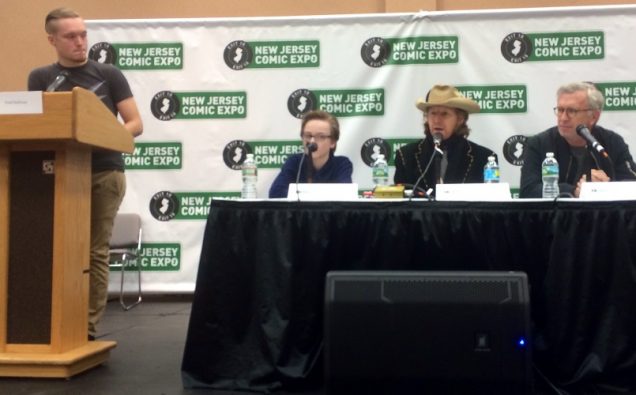 The New Jersey Comic Expo was this past weekend. One of the highlights of the weekend was an hour long The Walking Dead panel consisting of Major Dodson, Lew Temple, and Steve Coulter. The panel was a great time as the three stars told stories about their experiences on the show as well as about their careers in general. As there was some time to spare at the end, they opened the conversation to the audience and answered some questions. Some of the highlights from the panel can be found below.

Before I get to the highlights of the panel, a little info about the actors and their characters for those who might not know. Major Dodson played Sam Anderson during seasons 5 and 6, living in Alexandria. Lew Temple played Axel, a convict discovered living in the prison in season 3. Steve Coulter played Reg Monroe during season 5, Reg was an Alexandria resident, responsible for building the fortified wall around it.

One thing all three of these actor’s characters have in common is obviously that all three of them have already met their untimely demise on the show, and in spectacular fashion no less. This was a major theme during the panel. Major revealed Sam’s death scene took over 4 hours to film. Blood was everywhere, it was hot, and covered by a meat poncho. Major said, in the most sarcastic tone “It was running through a field of daisies.” Lew had been tipped off a few weeks before about Axel’s death. He had a feeling that it was going to happen because The Governor was about to show up and make some heads roll. Lew wanted Axel’s death to come out of nowhere. He just wanted that “BANG!” moment where people didn’t see it coming. Steve shared a very personable experience as it relates to Reg’s death. Steve said he had once saw a man die by getting stabbed in Brooklyn. “What struck me was the look in his eyes was not like a human being, it was like he went back to his animal state of just surprise. That’s what I was trying to hook into.” Talk about art imitating life.

Another really cool tidbit I picked up is that all three actors still watch the show. And also hearing the way they talked, I got the impression that most of the other former cast members watch the show too. There’s no resentment with the actors vs the show. There is no ‘they killed me off, to hell with this show’. They, just like us, sit in front of our televisions every Sunday night to see what happens. As Lew said, “We’re part of the audience now.” They also talked about avoiding spoilers and that they hate when they run into another Walking Dead actor and start talking, only for the actor to accidentally give away an upcoming spoiler. Steve then told a story about how he ran into Tovah Feldshuh at a convention. Tovah of course played his wife Deanna Monroe on the show. During their conversation she told him how excited she was for this new show she was working on. As Steve is telling the story, he is acting out his reaction. “When you’re working on The Walking Dead, you don’t have time to do other shows”, he said. Then you can see the gears working and the light went on. “Oh no!” Steve had just found out about Deanna’s death, long before any of us did. Personally I think it’s great to hear that the stars of the show are also fans. It’s great to know that they sit on the edge of their seats just as much as we do every Sunday night.

One final tidbit that I did pick up, that is completely irrelevant to any, but I feel must be repeated. As the actors discussed jobs that they had before becoming actors, Steve let the world know that he used to be a bounce at a folk club. You can imagine that got a loud laugh from the audience and a great reaction from Lew.

The panel ended with the three talking about their upcoming projects. While Major said he doesn’t have anything imminent coming out, he is working on some things in the upcoming future. Lew can of course be seen in Rob Zombie’s 31 and starring in the upcoming film Kidnap as the kidnapper of Halle Berry’s child. He mentioned Kidnap twice during the panel, and once when I personally talked to him during the convention, and you can tell by the way he talks about it that he is very excited and proud of it. While it might not be in the horror genre, it might be something to look out for if you are a Lew Temple fan. Steve said he is shooting a film entitled Hangman with Al Pacino, which Steve referred to as “a dream” and also revealed he’ll be in the upcoming season of House of Cards as The Governor.