The Day Will Come When You Won't Be

Overview:
Negan is going down the line of his potential victims.  He stops as he makes his choice, Abraham.  After the first blow, Abraham manages to insult Negan.  He laughs as he strikes down Abraham.  He then taunts Rosita, causing Daryl to punch Negan.  Dwight and two Saviors tackle Daryl to the ground.  Negan reminds Rick’s people that if anyone tried anything, they would pay for it.  Negan punishes them by killing Glenn.  Before he dies, Glenn tries to comfort Maggie.

Negan decides Rick needs to be taught a lesson.  He orders his right hand man, Simon, to bring Rick’s ax. He then takes Rick and drives off in the RV.  He pulls out Rick’s ax and slams into a table.  Negan then gets in the driver’s seat.  As he drives, he taunts Rick, actually daring him to attack him.  Rick grabs the ax and rushes Negan.  Before he can strike, Negan turns around and aims an assault rifle at Rick.  Negan hints that if Rick tries anything, more of his people will suffer the consequences.

Rick sits in shock as Negan taunts him.  He makes a quick stop and tosses Rick’s ax on the roof.  Negan opens the door to reveal several walkers outside.  He then orders Rick to go out and retrieve the ax.  Rick goes out to face the walkers.  There’s smoke everywhere making it hard to see.  Negan has taken Rick back to one of the roadblocks.  He can’t strike at Negan but he can kill every walker that he tries to bite him.  Rick fights his way to the roof.  He needs a moment to take in what happened.  He thinks about the rest of his people at the Savior’s mercy. He sees the man the Saviors killed, the one hanging from the bridge.  Negan orders Rick to bring him the ax then opens fire.  Rick jumps off the roof and hangs off the bridge walker, dropping the ax in the process.  Negan opens a window and opens fire, giving Rick a clear path back to the RV. 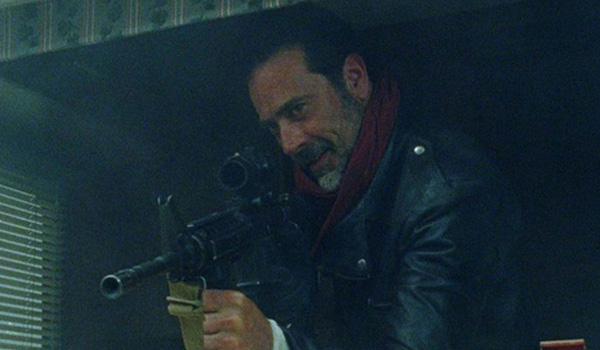 Rick finds the ax and fights his way back to the RV.  He hands the ax back to Negan and sits down.  Negan tell Rick that he’s no longer in charge.  Rick, his people and their possessions belong to Negan.  Once back at the clearing, Negan decides a lesson is in order. He orders the Saviors to aim their guns at Rick’s people.  He then orders Carl to step forward.  Negan then orders Carl to lay down and draws a line on his arm and hands Rick the ax.  If Rick doesn’t cut off Carl’s arm, his people will be killed.  The people back at Alexandria will also be wiped out.  Rick begs with Negan to no avail.  A countdown starts as Carl begs his dad to do it to spare their friends.

At the last second, Negan stops Rick.  He kneels and look into Rick’s eyes.  He’s pleased to see the broken look.  Negan wanted Rick to be defeated.  Rick is now broken and will obey Negan. There’s one last punishment Negan wants to deal to Rick.  He takes Daryl as a hostage.  If Rick doesn’t obey, Daryl will be suffer as a result.  Negan offers Rick and his group a truck so they use it to collect the goods for the Saviors.  As Negan leaves, he reveals he’ll be back in one week for collect their first payment.

Maggie tries to get to her feet.  She wants Rick to go back home and get ready to fight the Saviors.  Rick knows they can’t fight back.  They’re outnumbered and the Saviors still have Daryl as a prisoner.  Maggie begs the group to leave her, but no one is leaving her behind.  Sasha, Rosita and Eugene carry Abraham’s body.  Rick, Carl and Aaron carry Glenn’s body to the RV.  Rick drives his people back home.  He has no idea what to do next.  Negan has killed two people he cares about.  The Saviors now own then all. 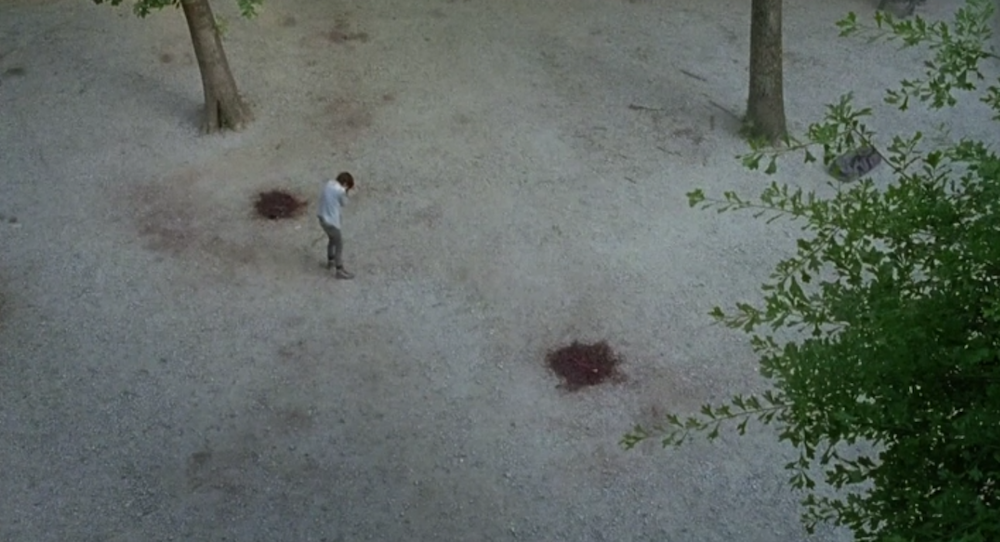 Negan: Bet you thought you were all gonna grow old together, sittin’ around the table at Sunday dinner and the happily ever after.  No.  Doesn’t work like that Rick.  Not anymore.

Maggie: You were out here–for me.
Rick: We still are.

Impression:
This was one hard episode to take in.  Glenn died in the comics so a lot of people were preparing themselves.  The scene was so brutal on many levels.  Lauren Cohan knew just how to pull at our heart strings.  She had only a few lines in this episode so she had to rely on her body language.  Glenn was there from the beginning.  He was like a brother to Rick and now he’s gone.  Rick lost two people and a third is now being held hostage.

Negan is a dangerous foe that knows how to deliver damage to his victims.  He taunted Rick with psychological warfare.  Rick could take him in a fight.  Yet Negan played with Rick’s emotions, his love and loyalty to his people to get him to submit to his will.  Negan could’ve easily killed Rick and his people right there.  He wants slaves, not victims.  The world is over and Negan is loving every minute of it.