Overview:
Michonne and Rick are laying in bed peacefully.  Michonne slowly gets out of bed and leaves with a sniper rifle.  She heads out to an empty field to get some target practice with a walker.  She spots a walker and takes a few shots at it.  She gives up and kills it with her katana.  She then follows the walker’s path and finds a dead deer.  She takes the deer back home with her.

Meanwhile, Spencer and Rosita are heading out on a supply run.  Eugene is guarding the gate.  He declines an offer to join them. Rosita dismisses Eugene as Spencer hears vehicles approaching the gate.  The Saviors have arrived to pick up their offering.  Rick appears and notes they’re early.  Negan jokes that he missed them.  As Rick opens the gate to let them all in, he sees Daryl among the Saviors.  He makes Rick hold Lucille as he admires Alexandria.  He also shoots down any notion of Daryl being acknowledged. 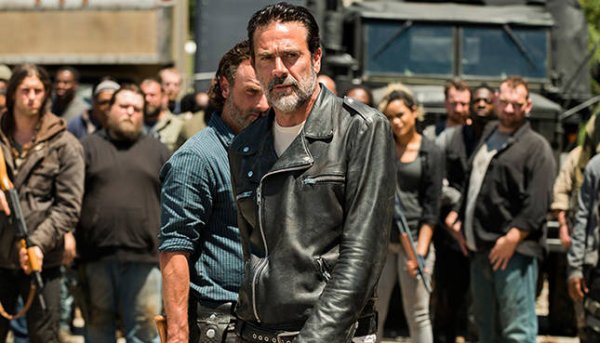 Dwight disarms Rosita and Spencer before they leave on their supply run.  He also sends them on an errand to retrieve Daryl’s bike.  Spencer and Rosita find Daryl’s bike.  Spencer is angry and blames Rick for the situation.  Rosita ignores him as she takes off.  She tracks down and kills a couple of walkers.  She takes a gun off one of them.  She knows the Saviors are going to take all the guns.  The people of Alexandria need to defend themselves.

The Saviors begin to look around Alexandria.  Negan taunts Rick about how he’s no longer in charge.  When Negan asks about Maggie, Father Gabriel appears and tells Negan Maggie passed away.  Things take a turn when a gunshot rings out.  Negan goes off to investigate and finds Carl aiming a gun at a Savior.  Rick tries to defuse the situation as Negan seems to be impressed by Carl’s bravery.  He also points out that the Saviors decide what they take and what they leave behind.  Carl eventually backs down and hands Rick the gun.  Negan decides to take away all of the guns to prevent anymore outbursts.

Rick takes Negan and the Saviors to Alexandria’s armory.  Negan points out that he’s not taking any of their food.  He doesn’t want them to starve to death.   Rick assures Negan that he’ll receive all the guns.  There’s also no traps or ambushes waiting for the Saviors.  A problem arises when a Savior, Arat, points out the two guns are missing from the armory.  Rick has no idea what happened to the guns.  Olivia swears that the inventory log is accurate.  Negan is getting annoyed and threatens to kill Olivia if the guns aren’t found soon.

Rick holds a meeting with the citizens of Alexandria.  He assures them that there’ll be no repercussions if the guns are handed over.  He just wants Olivia to be safe.  Rick goes to Spencer’s house, desperate to find the guns.  Father Gabriel assures Rick that everything will work out.  Rick thanks Gabriel to helping him trick the Saviors into thinking Maggie is dead.  Rick does suspect that Spencer hid the guns.  His suspicions are correct when he finds the guns upstairs.  He takes them to Negan who demands to know who hid them.

He wants Rick to make sure everyone sees the Saviors as their rulers.  As Negan and the Saviors prepare to leave, Negan and Rick spot Michonne in the burnt out guard tower.  Rick asks Negan if he can talk to her.  Rick asks Michonne to give him the sniper rifle.  He saw her leave earlier.  He knows that if the Saviors find out she has it, they’ll kill someone else.  She hands over the rifle and Rick hands it over to Negan.  Rick wants Daryl to stay, so Negan asks Daryl if he wants to stay with Rick.  Daryl ignores him to Negan’s delight.

Spencer and Rosita return with Daryl’s bike.  Dwight takes off on Daryl’s motorcycle as Negan says goodbye to Rick and his people.  Rick confronts Spencer about hiding the guns.  He’s furious that Olivia almost got killed.  He’s not mad that Spencer was hoarding guns, he’s mad that Spencer was also hoarding supplies.  Spencer snaps back that they should’ve made a deal with the Saviors earlier.  He even tells Rick it’s his fault Glenn and Abraham are dead.  Rosita is furious that Spencer had guns and didn’t tell her.  He tells her he hid the guns because he doesn’t trust Rick to be in charge.

Michonne and Rick are settings things up for the night.  Michonne wants to fight back against the Saviors.  She even suggests joining forces with Hilltop, but Rick points out the Saviors have them outnumbered.  Rick feels that if they play by the Saviors’ rules, they can at least live.  Rick tells Michonne about his friend, Shane.  Shane took care of Lori and Carl when the outbreak started.  He also knows Judith isn’t his daughter.  He’s accepted that fact so he can protect her.  He’s accepted the Saviors’ deal so he can protect everyone.  That night, Rosita pays a visit to Eugene.  She wants him to make her a bullet.  She has a plan and is ready to see it through. 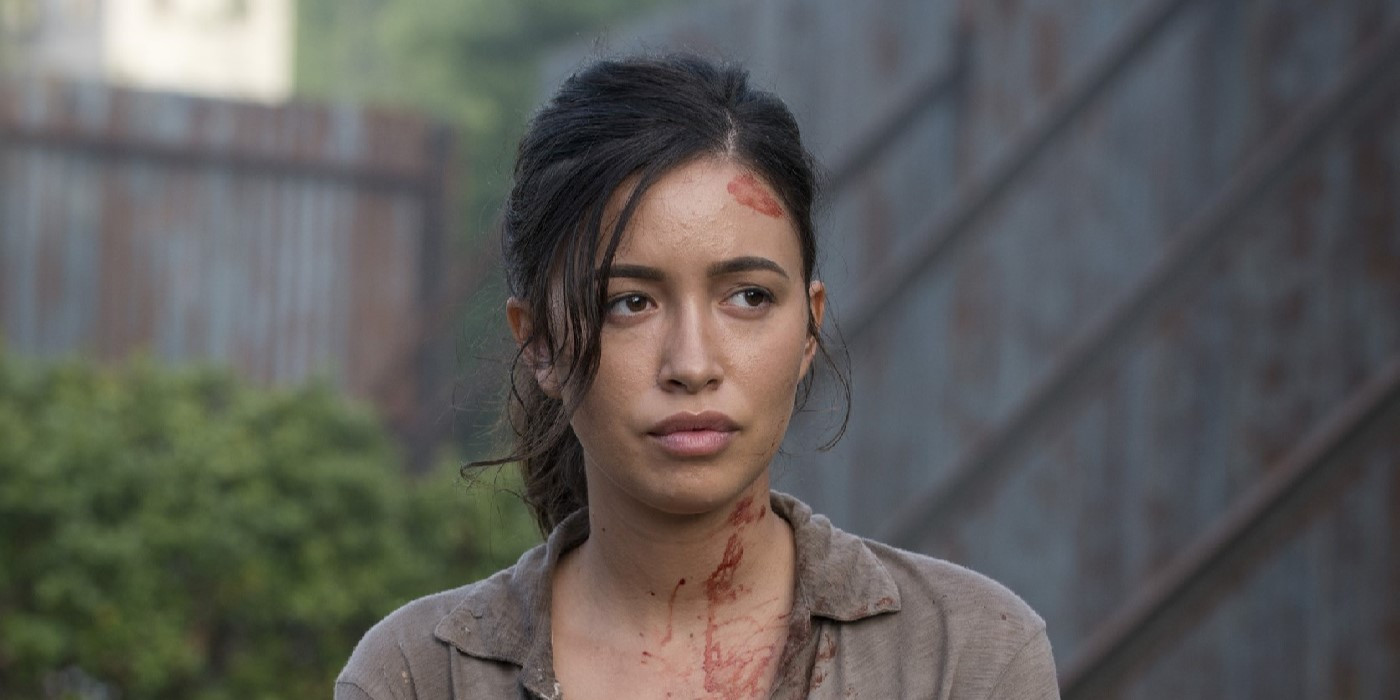 Quotes:
Carl (to Negan) You should go, before you find out how dangerous we really are.

Negan: (to Rick)  In case you haven’t caught on, I just slipped my dick down your throat, and you thanked me for it.

Impression:
Negan has no problem with taunting Rick and his people.  Seeing as how he’s ountnumbered and outgunned, Rick has no choice but to take Negan’s abuse.  His friends are hurt and confused by the new regime change.  Rick was a tough but fair leader.  Negan is ruthless who has no problem threatening or even killing anyone who crosses him.  Rick hates feeling powerless to stop Negan.  He fears that if he stands up to the Saviors, his people will suffer as a result.

Rosita has a gun and needs ammo to carry out her plan.  I think she’s going to kill Negan.  She only needs one bullet to put him down.  I don’t think that’ll be enough. What if she misses?  What if another takes Negan’s place? What is Rosita’s plan to take out the rest of the Saviors?  I know she wants revenge for Abraham.  I have a feeling her plan will end on a bad note.