‘What We Do in the Shadows’ is a funny, bloody vampire spoof 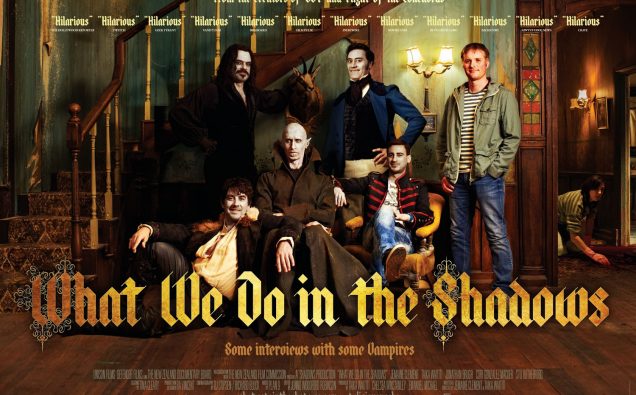 What happens when a film crew follows around a group of vampires living in a flat in New Zealand? Surprisingly awesome fun, that’s what! I ran across this entertaining, breath-of-fresh-vampire-air movie while flipping through the channels on TV. What I discovered on Cinemax is probably the funniest mockumentary I’ve seen since “This is Spinal Tap”. Yes it’s goofy and campy, but very quotable, which reminded me of the greats “Monty Python and the Holy Grail” and “Young Frankenstein”, both of which I quote often to this day! The only other documentary style thriller that compares in my estimation is “District 9”. (Which is also a really awesome movie!) 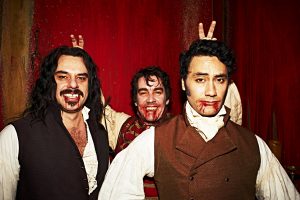 “What We Do in the Shadows” is a crazy, silly mockumentary all about a group of undead men-children and their lives together. The premise is:  A documentary team films the daily comings and goings of a group of vampires that share a house in Wellington, New Zealand. Promised they would not be hurt and armed with crucifixes, what the team discovers at the bat cave (instead of man cave- get it?) is pretty weird and great. Come and visit “dead” center in the daily rituals of Viago (Taika Waititi), Deacon (Jonathan Brugh), Vladislav (Jemaine Clement) and Petyr (Ben Fransham ), four vampire flatmates who have the same problems as regular roomies with a few more unusual obstacles thrown in. Each vampire is from a different era- their ages ranging from 183 to 8,000 years old. Other than being vampires, they only have couple of things completely in common-like they absolutely have to stay out of the sunlight, (so as not to catch on fire), werewolves are not their friends and of course the biggie- being immortal beings who must feast on human blood. Those things aside, what makes this movie funny and work is their different personalities and how they cope for centuries in a world they don’t fit into.

The script was written by Waititi and Clement, who are known for the HBO hit “Flight of the Conchords”. One of the best parts for me was hearing that they wrote over 150 pages of actual script but chose not to show it to a single person involved in the film (both crew and cast). The reasoning was to keep things spontaneous and actors to be surprised by the events unfolding before their eyes. Being good at improvisation was the key. Most of the main characters are very similar to famous vampire characters from past movies, except for Waititi’s vampire Viago, which he said was based on his mom. Vladislav reminds me of Gary Oldman’s “Dracula”, Petyr is a perfect 8,000 year old Nosferatu, and Deacon is similar to Bela Lugosi in “Dracula”. Early in the movie a new vampire joins the group. Nick (Cori Gonzalez-Macuer) is a lot like Edward from the “Twilight” series. Just recently turned by Petyr, he is constantly telling anyone who will listen “I am Twilight!” which upsets the other vamps. Nick also brings along his human friend Stu to hang out at the house. The boys put up with Stu as he teaches them about the current technology. Helping them find virgins on the internet is a great way for him not to get his blood sucked dry!

I don’t like to give out spoilers, even on a comedy, but needless to say their differences make for some funny scenes. Viago (an ex-Nazi) is a fussy clean freak and always asks the others to put down towels or paper before biting someone in the house. “We’re vampires! We don’t put down towels” he is told. His response? “Some vampires do.” 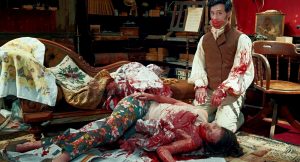 Viago makes a mess, even with the towels down

He also has his chore wheel and expects the others to clean up after themselves, but those bloody dishes never get washed. Vladislav is still into torturing people, like he’s done for hundreds of years, but now that he has lost some of his telepathic abilities, he is feeling guilty and much more sensitive. Deacon is like an old rock star that doesn’t know he is past his prime. My favorite quote of his: “I call this look, dead and delicious.” Deacon also keeps Jackie, a human, as an indentured slave to help get victims and clean up the blood. The motivation for her is that someday he will make her immortal too. Petyr, well he is just a cranky, scary, vampire curmudgeon and stays in the basement most of the time.

“What We Do in the Shadows” is full of bat fights, run-ins with werewolves, night clubbing, (the problem is they have to be asked in to enter) fashion problems, (what to wear when you can’t see yourself in the mirror) hypnosis that goes wrong, hitting the artery while biting a victim (very messy), and even true love. For serious gore fans, no worries, there is blood, lots and lots of it!