Why I Buy: A Film Collector’s Manifesto 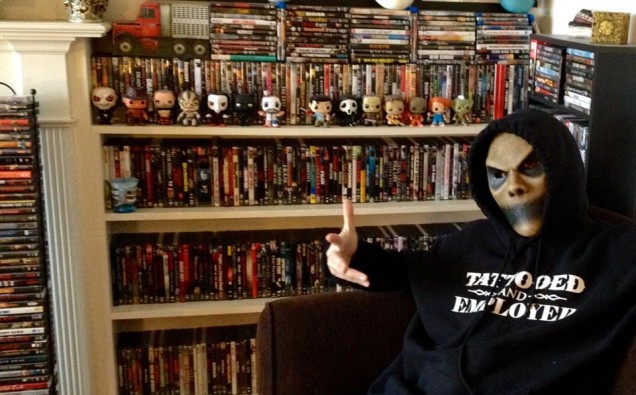 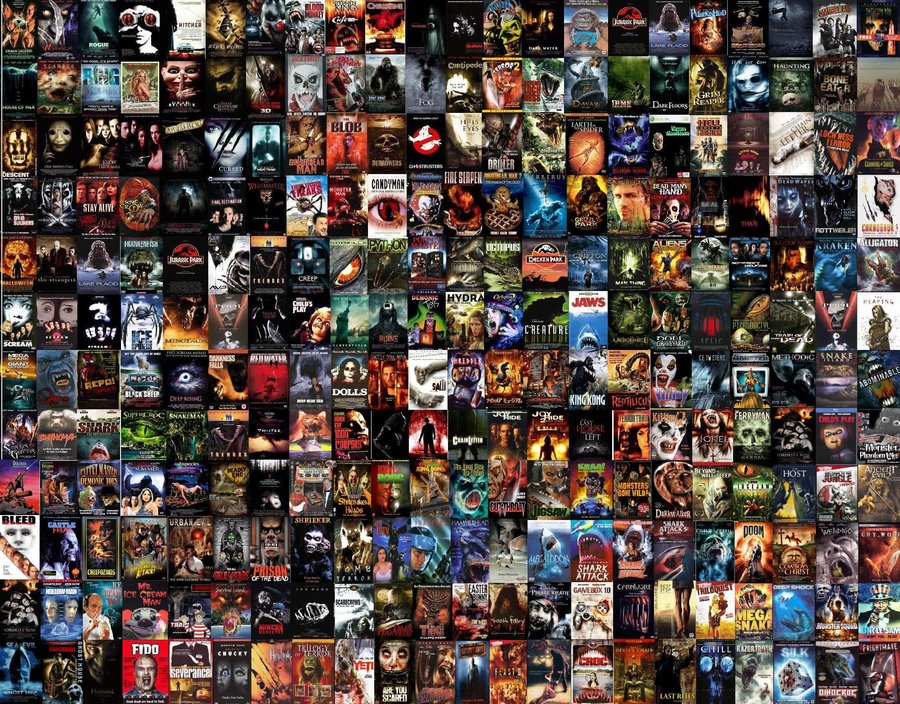 I buy movies; my Blu-ray/DVD collection is over 650 titles strong! It’s comprised of 80% horror movies, 15% fantasy & sci-fi, and 5% miscellaneous. These films are my most prized possessions.

Collecting films in the Digital Age makes me something of an oddity. Just as music collectors saw their medias virtually vanish beneath the shadows of MP3’s, physical copies of films (and those who purchase them) are on track to becoming a rarity.

Many of my friends and colleagues, specifically Millennials, can’t seem to wrap their minds around why I choose to spend my resources on DVD’s when I can see the same films online for less money; some also wonder why I allow my collection to take up so much space when I can download everything onto a flash drive. So why do I buy? Lots of reasons! 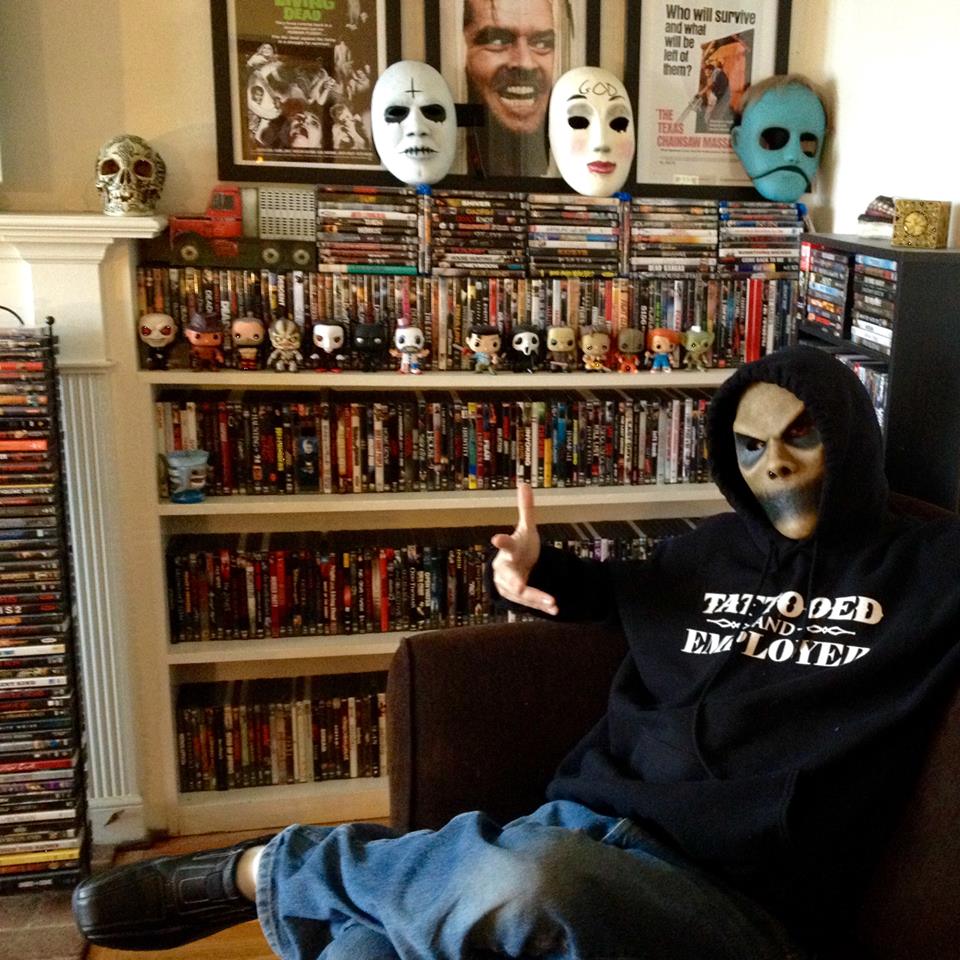 Purchasing a Blu-ray or a DVD makes me feel like I’m personally connected and invested in a movie. Sure, I can own a digital copy, but a physical DVD is so much more. There’s the tangibility of a DVD case and the artwork to appreciate. I can easily reference a synopsis and cast & crew details. Can you do that with a digital copy? I don’t think so. You know what else you don’t get with your digital download? Deleted scenes, bloopers, documentaries, commentary, and Easter Eggs—all of which enhance the viewing experience and give deeper insight into the filmmakers’ motivations.

What about Netflix? Netflix is great, but owning a movie feels more significant than merely watching it. Plus, Netflix doesn’t have every movie out there, and their selection constantly changes. I saw tons of French horror movies on Netflix back in the day (like Martyrs, The Horde, Inside, and Sheitan), but these films aren’t available today. Who knows what great films will disappear next—or whether they will ever return.

As for VOD, I consider it an exploitation of the impatient. People seem willing to pay almost as much as the price of a DVD just to stream a movie before it’s physical release—or instead of ordering a copy from Amazon and waiting a day or two. To me, that’s the real waste of money.

But don’t just take my opinions as gospel. Through a number of Facebook groups, I’ve been able to connect with many like-minded film aficionados. One of the most ambitious and dedicated collectors I’ve met is Rob Mann of Edmonton, Alberta.  Rob’s assemblage makes mine look like a drop in the bucket, so I decided to feature him and his collection in this article. Over the past few days, Rob and I have conversed and shared our passions for films and collecting. Enjoy! 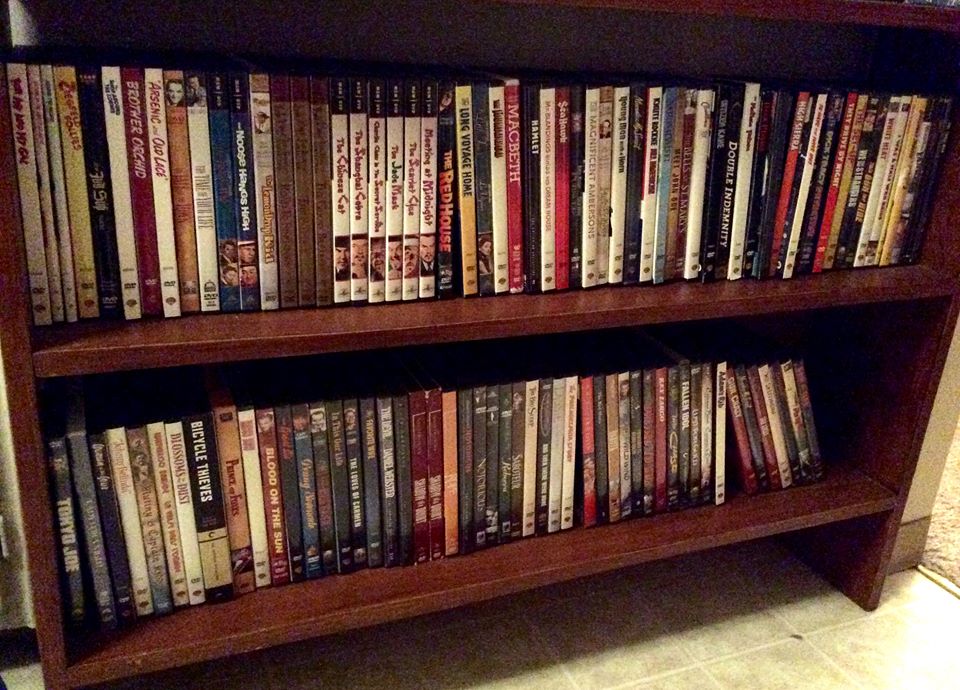 JM: What’s your total number of films and how many are horror movies? 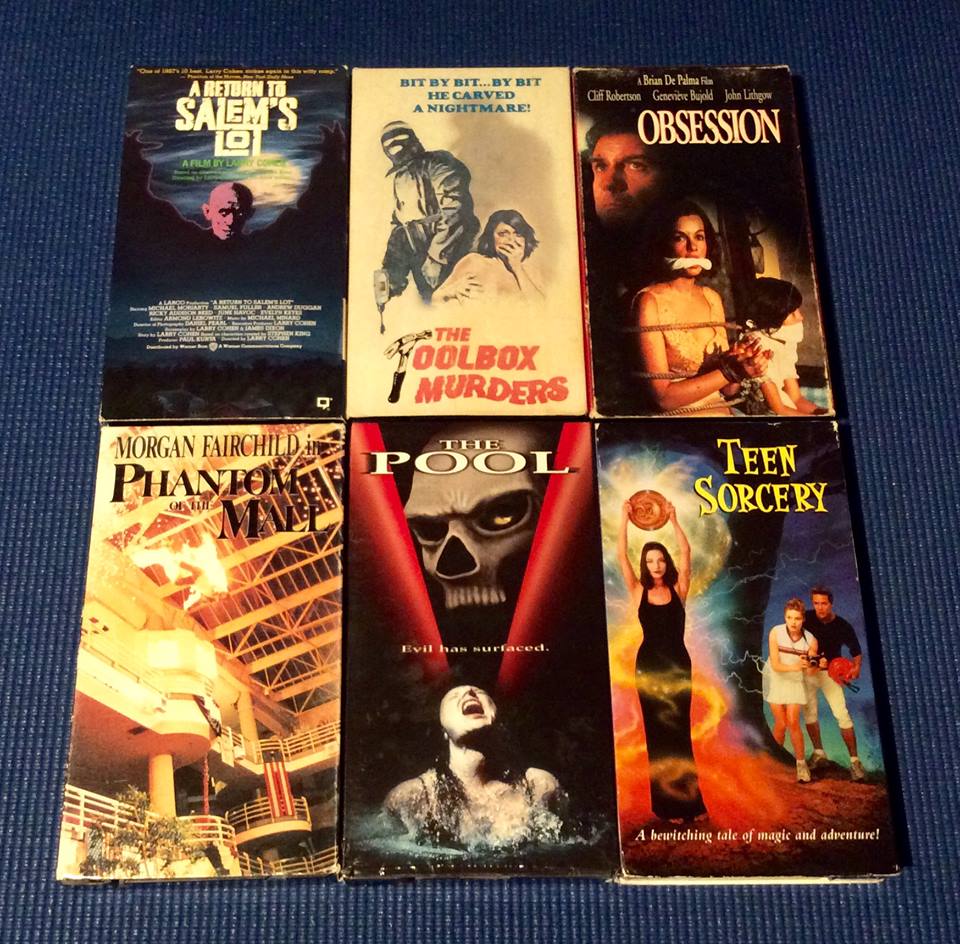 JM: When did you start collecting and what inspired you?

Rob: 2007. I always wanted to own movies but the price was way too high. I had been worried about video rental stores since the late 90s. The Internet was obviously going to be the death of many things and movie rental places seemed doomed. I was in a Zeller’s (Kmart type store) in 2007 and found a copy of The Philadelphia Story and then a copy of Woody Allen’s Sleeper for $4.99 a piece in a huge dump bin. I dug around and eventually spent $300.00. The price was finally right. I soon started going through thrift stores, pawn shops, flea markets, HMVs, etc. 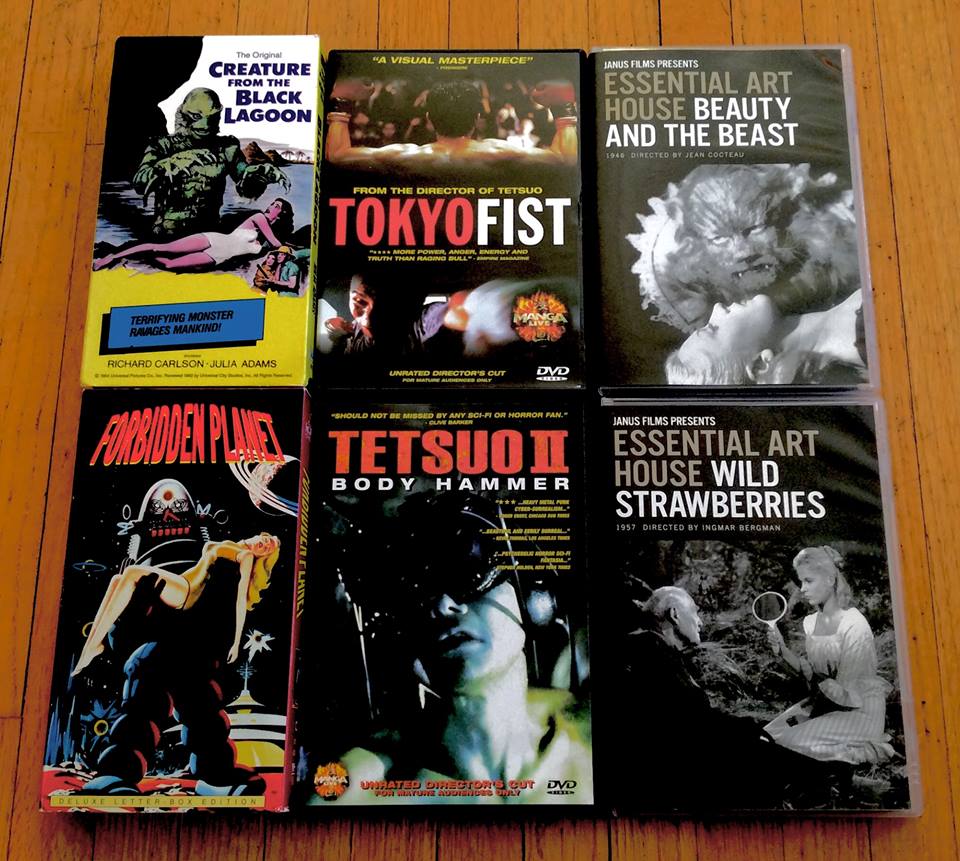 JM: How much have you spent on your collection?

Rob: I would guess around $30K. I buy most things used and I get most of my VHS at 3/$1. I do order off of Amazon and eBay but not much. Edmonton is a fantastic city if you’re looking for used movies or used anything really. I have 3 copies of Disney’s Song of the South on VHS and one of them is the very rare Japanese release. Paid less than $5 for all three. There are so many places to buy used movies here. I’m very lucky in that respect. 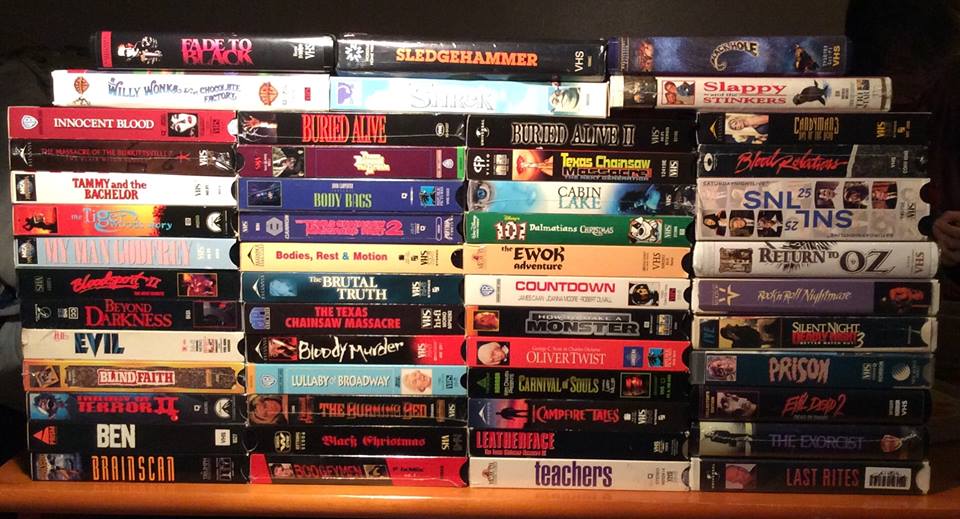 JM: How do you display your collection?

Rob: I have most of my movies in bagged apple and wine boxes in storage and my pre-1970 movies, excluding Westerns, are on floor to ceiling hand made shelves in the hallway and kitchen. My Criterion and some super rare films and a lot of box sets are jammed into various other shelves around the 1 bedroom apt. I have cult, Asian, and “this and that” stored in dressers and shelves. My horror collection is in and around a refitted hallway closet. I’ve accumulated so much so fast that I’ve had no chance to stay on top of it. I’m more concern with the accessibility and protection of the movies than in displaying them at home but I do kind of show what I find each day on Facebook 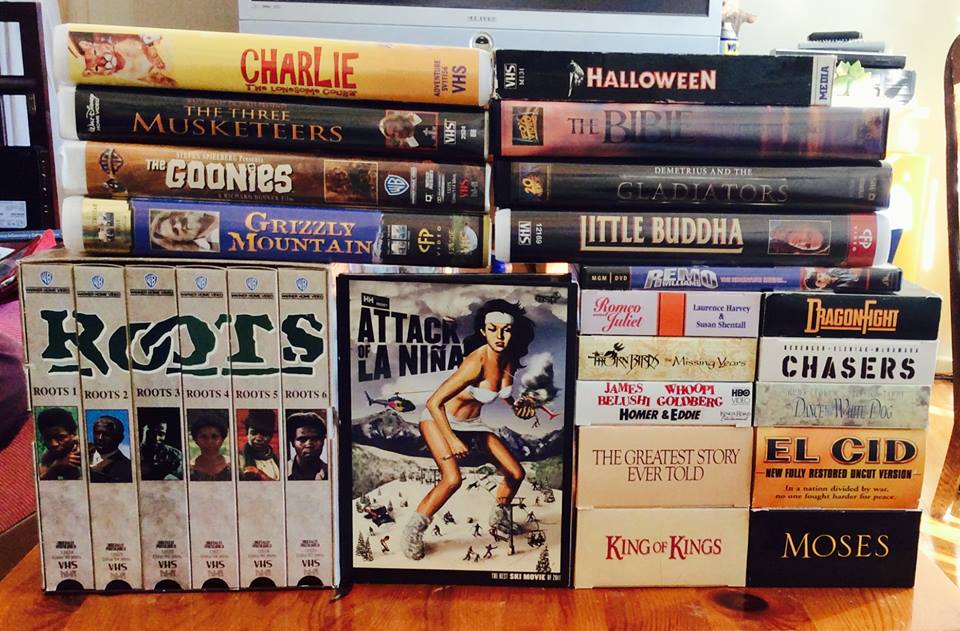 JM: What do you say to people who say things, like: “Just download,” or, “It’s a waste of space and money”, etc.

Rob: No one’s ever said exactly that but they do mention Netflix and then I just rattle off the numbers. As for flash drives, computers are the future and always will be, but I love having the hard copies. Space and money wasting is not an argument if you consider the value of a collection. I’ve picked up so many movies that go for 10x or more on the low-end asking price on Amazon, never mind the crazy high-ends. It’s an investment. I also clearly have an undiagnosed problem of some kind. I like to think of my collection as a form of therapy for – rather than a symptom of – a grand neurosis. 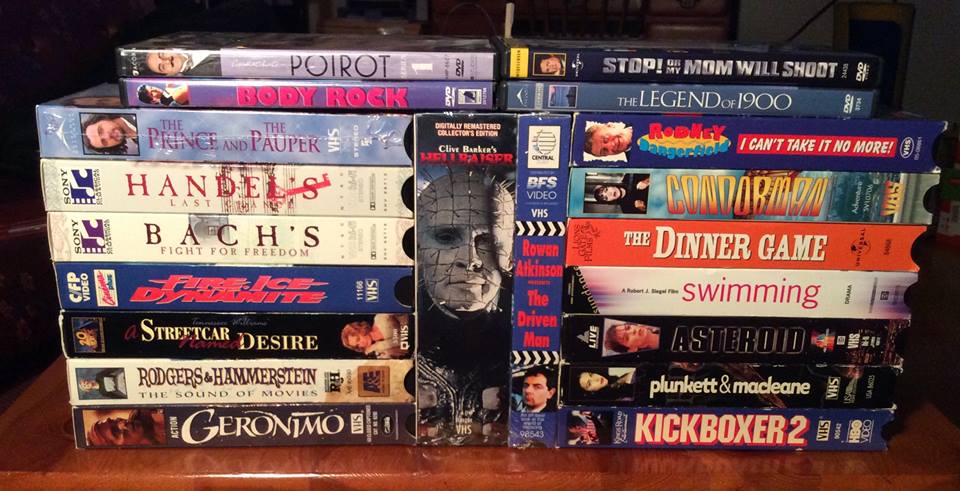 Rob: I think that a lot of movies will be lost forever from public access because they’ll be deemed inappropriate for viewing by the corporate kleptocrats due to racism, political correctness, or general subversive ideas like sharing. Anything that could tarnish the image of a study like Disney or whomever or anything that could shed light on what actual democracy might be would have to be buried. I don’t see Netflix – or whatever takes it place – not eventually deciding that it’s just not economically feasible to exist without ad revenue, which will then take the form of a 30 second commercial or two at the beginning of the movie like they do now in theatres. Then some in the middle of the movie. Netflix will become network television. Big media is in the hands of fewer and fewer people. When they fully control distribution, they’ll control information, they’ll control content, they’ll control education and eventual thought. That’s why I like to have access to a huge collection most of all. Choice outside corporate control. P.S. I do not believe Bigfoot shot JFK. 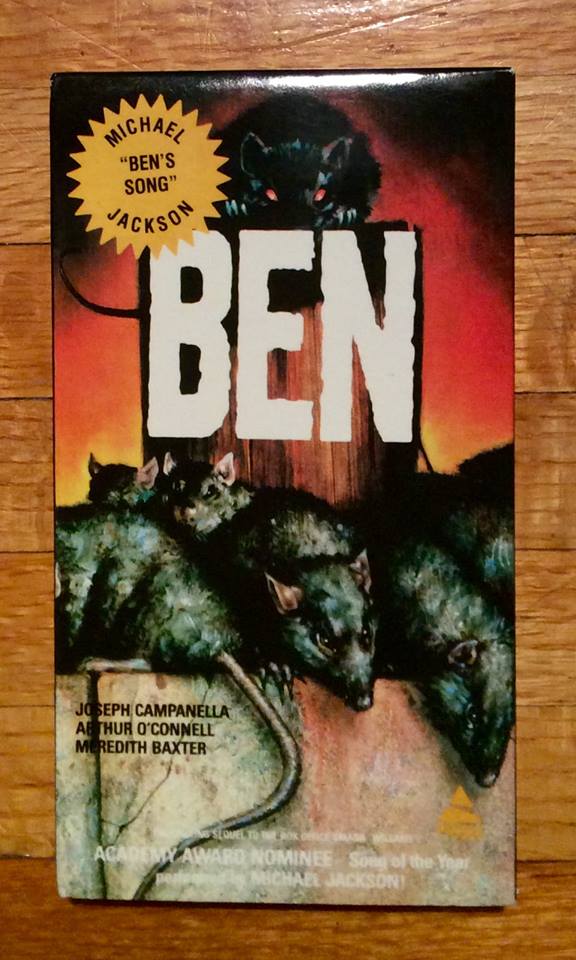 Are you a dedicated film collector like Rob Mann and myself? What are your motivations? Sound off in the Comments section!