“This Land is Their Land”. 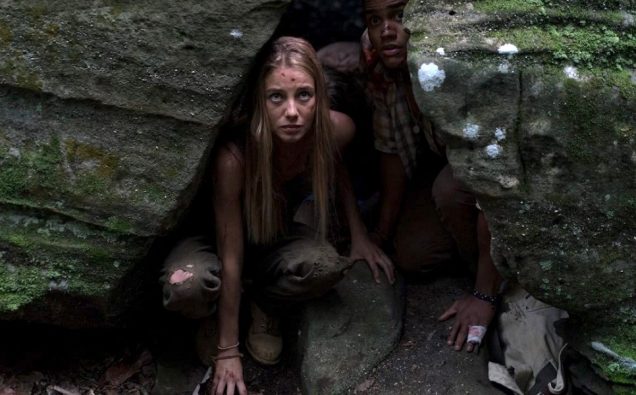 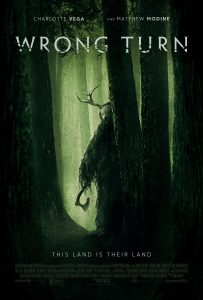 Since 2003, the series of Wrong Turn films have been violent, and grisly tales admonishing us to always stay on the marked trail. I loved the first film back in 2003, but honestly did not have any interest for the sequels that came after – until now. Wrong Turn 2021 brings back the thrill and brutality of the series, but without cannibals. Written by Alan B. McElroy, who wrote the first film, the feel is similar even if the updated monsters are different.

Synopsis: Friends hiking the Appalachian Trail are confronted by The Foundation, a community of proud, brutal people who have lived in the mountains for hundreds of years.

In the first Wrong Turn, the creators were focused on including some of the most gruesome traps and bodily injuries that they could. It was not a movie about the survival of cannibals, but rather the survival of innocent campers who just happened to take a trip to the wrong side of the Appalachian mountains.

The 2021 reboot directed by Mike P. Nelson, returns to the movie series’ roots, brings on the gore, ignores the sequels, and ensures that the fear of the West Virginia woods remains in the minds of every viewer. With a touch of the original Wrong Turn, I got vibes of movies like The Village and Midsommer. 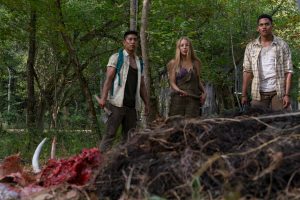 Wrong Turn starts with a familiar face- Matthew Modine as Scott, is a father looking for his daughter who has gone missing. Warned not to bother looking for her from grizzled local Nate, (Tim DeZarn) who tells him, “Out there, nature eats everything it catches right down to the bone”. The harbinger of doom doesn’t scare him off though, and he gets ready to go out into the forest to find her.

Flashing backward 6 weeks- we meet Scott’s daughter Jen, (Charlotte Vega) her boyfriend Darius, (Adain Bradley) and two other couples, who don’t seem to notice that since they are a very diverse group, they don’t really fit in the hillbilly town they have chosen to start their hike from. One thing to note, since the beginning of the movie is very much like the originals, (mini spoiler) it probably shouldn’t have been one of the minorities to die first. I just think it would have been great to be more current with the times. But that’s just my opinion. 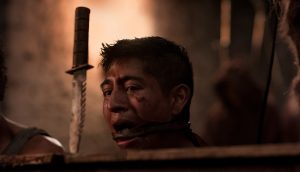 So off they go into the woods the next morning. Despite warnings to stick to the trail, the young hikers stray off-course and cross into a land inhabited by a dangerous community, who use deadly means to protect their way of life. After dealing with several crazy traps and snares that takes out one of them right off the bat, they realized they are being hunted. A familiar touch is the discovery by the friends of a barn full of backpacks and belongings obviously left behind by other stupid hikers. That is always a bad sign.

The newest monsters in the woods are a sub-culture of radicalized fanatics who call themselves The Foundation. They live simply and off-the-grid, are self-sustaining, wear a lot of furs, and hate trespassers. 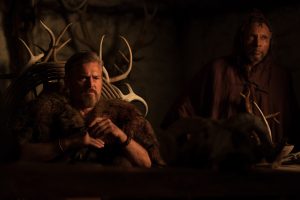 What is interesting is that this is basically three movies in one, mixed with a lot of familiar horror tropes. We have the father searching for his daughter, the friends trying to survive against all odds while being picked off one by one, and a story about a group of misguided patriots who moved away from society years ago, to start a new society from which a new nation would be built. Feels a little bit like an allegory for some ugly things in our current world.

Director Mike P. Nelson explains his feelings on the film:
“We wanted to make a movie that reflects the state of the mind of the world today. I think as people we are all capable of being the most extreme versions of ourselves so when those extremes collide one person’s dream can become another person’s nightmare. We’re telling the story of Jen and her group of friends that are all at critical junctions in their young lives – relationships, careers, looming adulthood are all things at stake for them. For them trekking the Appalachian trail is supposed to give them this clarity for what they should do with their lives….or at least they thought. When we meet Venable and members of The Foundation, it’s important to me that they are not your typical bad guys. They’re not the backwoods hicks. They’re not the white supremacists. This is a community of people who are very intelligent and very proud of their way of life. They will do whatever it takes to defend it. Jen in particular is a character that I think will resonate long after the credits roll — wonderfully flawed, determined character that will do whatever it takes to survive. But most importantly we wanted to make a movie that surprises audiences. They think the movie is going one way and we take them down a completely other turn. This is a movie where the audience will think they know who these characters are and we’ll completely flip that prejudice on its head. These characters keep surprising us which makes the movie so special.”

As a female who loves women in horror- I fell in love with Jen’s strength. 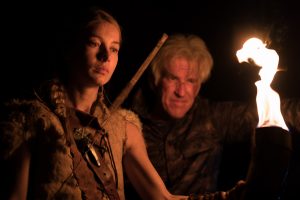 Jen makes some very difficult decisions in her plan to survive. If she and the leader of The Foundation, John Venable (Bill Sage) hadn’t done such an amazing job acting, the film could have gone to a very silly place with all the old-fashioned weapons, grubby faces, and so much fur. But I got sucked in fully and was willing to throw away belief. I totally enjoyed this film and became very invested in the tale.

Jen’s bravery, which quite possibly comes from severe PTSD resulting from what she goes through, is mind-blowing. Do not miss the end of the film! I mean into the credits, stick it out till it’s completely over. To go with the mix of stories, there is also a multi-level ending that I was craving but didn’t expect to happen. I gotta admit I cheered!!!

I really hope to see Charlotte Vega in more horror films! She, Bill Sage, and Matthew Modine were the standouts for me!

The newest addition to the franchise places the story in a contemporary setting, with a diverse cast, a large amount of blood and violence, brand new bad guys, and an amazingly insane ending that horror fans won’t soon forget. Wrong Turn is a fantastic start for 2021 horror films.

For Tickets and Information: www.FathomEvents.com