“Seven friends, one survivor… spring break has never been so bloody.” 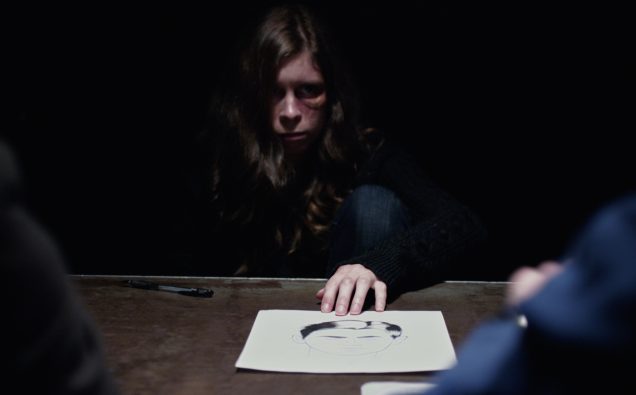 Let me just start out by laughing at one of the iconic lines in the beginning of the movie, WTF! Stoner boy deluxe, Jacob, (Benjamin Norris) while trying to talk his friends into going to a remote cabin (well actually a mansion) miles from everything, says “Two words. The woods!” My last name is Woods and I just moved to a remote farm house the same day I viewed the movie- so it just seemed to strike me as ironic and a bit funny. Anyway, I super digress, I apologize!

Sorry for any confusion, the title of the movie is WTF!  What is WTF! about? According to the official synopsis: “Three years ago, 22-year-old “girl-next-door” Rachel barely survived a brutal massacre that left all her friends murdered. Time has passed and Rachel has moved on, but unfortunately, her new close friends are spending Spring Break in a secluded house in the woods, and they have invited her to join the fun. She needs to face her fears, but she would never have accepted the invitation if she realized that another bloodbath would be the result. Once Rachel and her friends arrive at the cabin, the partying, sex and terror begins. Can Rachel survive another bloody massacre?”

OK, first thoughts right out of the gate…..I get that what we are hearing from our final-from-before girl Rachel, is that she needs to conquer her fears and go… but f**k getting over her fears, she needs to listen to her feelings and STAY HOME! It didn’t work out so well last time, right?

WTF! is a stylistic slasher genre horror movie, the debut feature film from director and co-writer Peter Herro. I wanted there to be something unique and new from this really good-looking film, but it is mostly an homage to 80’s horror tropes: a remote house in the woods, a girl in the shower, teens having sex, party animal types that we hate and won’t miss when they are killed off, a creepy old guy warning them not to go, characters calling out “Who’s there?” All things that you would never do if you want to stay alive. Haven’t any of these people been to a horror flick? 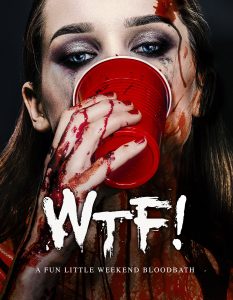 But, I liked the film. I took it on because it’s summer and I love summer slasher films, that are just that and don’t try to be more. This one has all the newer technology, like cell phones (never a thing in the 80’s of course) and a much fancier house, with a hot tub, very unlike the old cabin and lake scenario. Rachel played by the talented Callie Ott was terrific! She really made this movie for me. Most of the other characters were very over the top and horrible people to boot. None of them deserved to live in my horror movie check list, so they were all perfect for the picking. None of the murders were crazy original, but I did love the one that involved hair spray. That one was pretty darn gross and brutal. Yeah, I’m a sicko, I like that kind of stuff!

I kind of got an idea there was something more than meets the eye, with the added scenes of Rachel being interrogated by the police about the past murders, her attendance at a mysterious funeral, and her general craziness, so I wasn’t surprised at the twist ending, but I was very satisfied with it.

So, Spring Break should have been a blast…aside from the stabbing, flesh melting, and castration. Seven friends will go into a secluded house for what should have been the best Spring Break of their lives. But only one will be alive to post about it on Facebook next week, as Rachel’s biggest fears become a reality once again.

WTF! is out on VOD today. Check it out if you dare!