Never seen zombies do that before 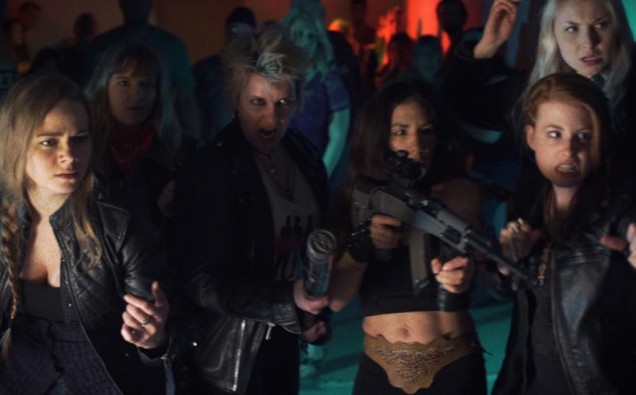 Zombie: noun. The body of a dead person given the semblance of life, but mute andwill-less, by a supernatural force, usually for some evil purpose.

I talked with Shelly Anthis, David Zellis, Roger Boyer, and Craig Guiboche of Zell-Koj Studio about the film. Here’s how it went!

John Lepper: Thank you for taking the time for this interview. So, you are all working on a couple of projects right now. First off, what can you tell our readers about “Frackin’ Zombies”?

Zell-Koj Studio: Frackin’ Zombies is a action/horror film that we have created a trailer for the Cinecoup 2015 accelerator. Frackin’ Zombies is set in a small town where the community has been divided on their local fracking industry. Pro frackers who live in town are living off the financial gain of fracking and the people who live on the outskirts of town, residents against fracking live alongside a group of female biker babes. Greed gets the better of some residents and unknowingly causes a spewing eruption that spills into the cemetery causing an outbreak of zombies.

JL: So, it sounds like there is a bit of a morality theme to this zombie yarn. I take it your group is against fracking?

ZKS: We are not taking sides, but as we have been researching into fracking and alternative energy sources we are letting the audience decide. We have been connecting with anti-frackers in the USA and in videos we have been watching we want to give the movie a feeling of authenticity.

JL: Well, it’s refreshing to see a zombie movie with more brains in it than just the ones the zombies are snacking on. To me, this political side tells me that you’ve put a lot of thought into this film and makes me more interested in seeing it. So, what are your release plans for the film?

ZKS: Hey John awesome question. We are currently enrolled in the Cinecoup competition and if we were to be financed the 1million to make the film it would be guaranteed a release in Cineplex theaters (the main theater chain in Canada). If we do not get the financing through Cinecoup we still plan to make it and we would aim for a theatrical release in rep theaters and of course eventually have an online release afterwards.

JL: Sounds like you’ve got it all planned out! Awesome! Ok, and that makes me curious about what you have going on with your other project, the slasher film Dark Forest. What can you tell the readers about that?

ZKS: Dark Forest was our first feature film so it was both challenging and fun.

We are working towards a VOD release on Oct 23rd, currently we have entered into a number of film festivals we are waiting to hear back from. We also plan on a whim calling some of the theaters in Canada (for a limited release) to see if they will run it previous to the VOD release on Oct 23rd. We will have a newsletter sign up on the website before the 23rd. The crucial thing for us is building our audience so getting people to like us on facebook and follow us on twitter is important.

The poster logline for the Dark Forest is “4 women, 1 madman, let the fun begin”.

JL: You guys certainly go all in. I love slasher films! What can you tell me about the plot?

ZKS: Four girls go on their annual camping trip and one of the girls aggressive boyfriend Peter stalks them out in the woods. This results in a good ole fashioned 1980’s style killing spree with a synth style soundtrack.

JL: Gotta love the retro stuff and a good soundtrack is hard to come by these days. Sounds great! Alright, thank you again for taking the time for this interview. Before I let you go, is there anything else you want to tell our readers?

ZKS: Just a quick question for you do you know when this will be posted on your website? As there is a cool thing about Frackin Zombies we can’t really release until the trailer goes live on March 16th, which we would love to let you know if you are publishing this after March 16th.

JL: I can absolutely hold off until after March 16th. Lay it on me.

ZKS: Greed gets the better of some residents and unknowingly causes a spewing eruption that spills into the cemetery causing an outbreak of ADVANCED FIRE-BREATHING zombies.

JL: Awesomesauce! That is certainly something I have not seen before! I can’t wait to see it! Alright, well, with that, is there anything else you want to share with the readers before I let you go?

ZKS: We really need fan support on Cinecoup over the next 11 weeks so like us, follow us, share us so we can earn votes on Cinecoup.

Thanks again really appreciate this we will forward you the trailer when it is up, and let us know when the article is up on your website.

JL: You got it! Thanks again for taking the time to talk about these awesome projects! Have a good one and best of luck!

ZKS: Thank you John have a great night!

Check out the page on CineCoup and show them some support!