BLACK PANTHER DOMINATES SATURN AWARDS with 5 WINS, and the Force was strong with Star Wars: The Last Jedi with 3 wins, including Best Actor for Mark Hamill 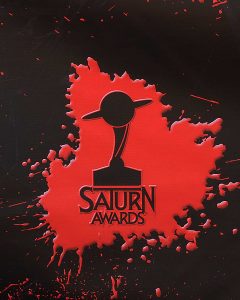 What could have been just another beautiful star-filled night in Burbank, also brought us the 44th Annual Saturn Awards! I know, it’s not the Oscars, but this also famous awards show, hosted at the legendary Castaway Restaurant (with the most amazing views of Los Angeles), is where the Academy of Science Fiction, Fantasy and Horror Films honor the best talent in genre entertainment. I have to admit- this is one night I look forward to every year! Not only did this geeky zombie girl get to meet Mark Hamill, (OMG- the force was with me) I had the honor of talking to some of the coolest actors ever and look at Jupiter and Saturn through powerful telescopes. I am still giddy with excitement! 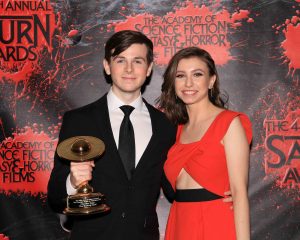 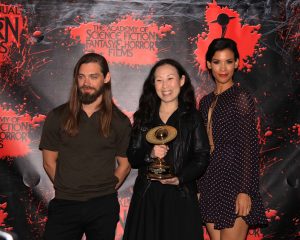 The awards were pretty evenly spread out and diverse because of the great number of categories.  Marvel’s Black Panther was named Best Comic-to-Motion Picture. Blade Runner 2049 walked away with Best Science Fiction Film, while The Shape Of Water won Best Fantasy Film, Get Out won Best Horror Film, Coco won Best Animated Film, and Wonder earned the award for Best Independent Film. And unlike the Oscars, Wonder Woman earned some respect, with Gal Gadot winning the Best Actress Saturn. 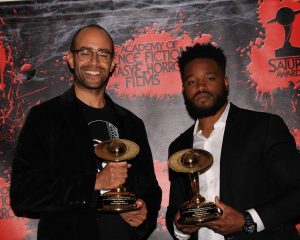 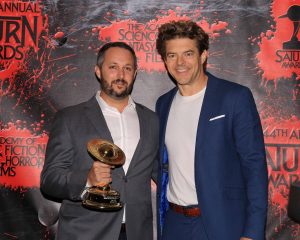 Most of the attendees seem to feel the same about the Saturn Awards as I do. Since it’s such a geeky type of event, you never know who will show up. It’s a much less intense show to go to and many said it was their favorite, including Guillermo Del Toro on his pre-taped thank you speech. While accepting his Producers Showcase award, two time Academy Award nominee Jason Blum (who also received a Saturn for Get Out) compared it to another popular show. “This is so much more fun than the Oscars. It is so much more relaxed. It’s awesome,” he said, then revealing to the audience that as a kid he collected his own fingernails and kept them in a box. “Who would have ever thought that I could be in a room like this in front of all of you and talk about my fingernail collection, and that would actually kind of like help further my career?” He’s right- this genre is full of weirdos and it’s an honor to be one! 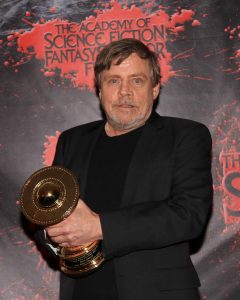 One of the highlights for the audience was the double win of Twin Peaks and the appearance of David Lynch bringing the first of two standing ovations. The other one going to Mark Hamill’s Best Actor win. Hamill laughed, “The first time I was nominated was in 1977 for Star Wars. I called Harrison and said ‘Harrison, the Saturns!, we’re both nominated in the same category. I think we might cancel each other out unless we call the Academy and get them to put one of us in the supporting category – hint hint’- and there was a long pause and then I heard, ‘what the fuck is the Saturns’?

Receiving Special Awards were Jake Kasdan (Jumanji: Welcome to the Jungle) who was presented The Filmmaker’s Showcase Award by Jack Black, Sarah Schechter was  presented the Dan Curtis Award by KJ Apa of Riverdale, Don Mancini (creator of Chucky), the Special Achievement Award, and Blumhouse producer Jason Blum (Get Out!, Halloween) received the Producers Showcase Award.

For more information about the Saturn Awards and the Academy of Science Fiction, Fantasy and Horror, visit www.saturnawards.org.

Here is the full list of winners at the 44th Annual Saturn Awards:

Best Horror Film: Get Out