A Farewell to my Dracula 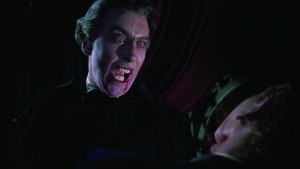 I can’t remember the first movie I ever saw Christopher Lee in. All I can say for sure is that it happened sometime prior to the release of Gremlins 2: The New Batch (1990), in which he played Dr. Catheter.

On the other hand, I do remember growing up with copies of a couple of coffee table books about horror movies which heavily emphasized the Hammer films of the 50s-70s, and included numerous images of Lee in his signature role: Count Dracula. 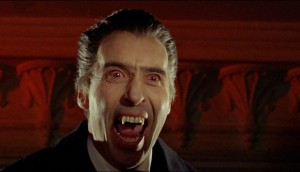 Dominating a movie in which he has no dialogue at all, Dracula – Prince of Darkness (1966)

I was brought up on a mixture of classic Universal horror from the 30s and 40s and some more modern horror (of the time, so 1980s), but I was never exposed to much from those interim years (Night of the Living Dead [1968] being the most notable exception); that period existed almost exclusively in still images more the first 13 years of my life. The result was that the films of Hammer and Amicus occupied an odd space in my perception of the genre, simultaneously alien and iconic.

Those images of Lee as Dracula might not have had much context for me, but despite – or maybe because of – that lack of context, they burned themselves into my brain. Lee gazed out of the page at me, and I was unnerved – even frightened – in a way that, frankly, I never had been from watching Bela Lugosi in action (Max Schreck’s turn in Nosferatu [1922] is, of course, another matter; that movie scared the Hell out of me as a child). 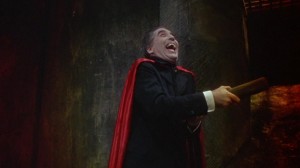 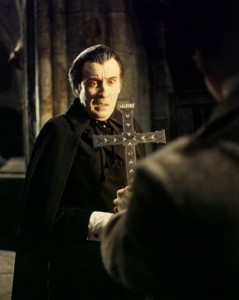 Recoiling from the cross in Taste the Blood of Dracula (1970)

Then, when I was in 8th grade, Bram Stoker’s Dracula (1992) hit the screen, and pop culture started paying attention to Dracula in a way it hadn’t since 1979 (the year I was born, so I wasn’t really involved in that conversation). For an English class assignment, I decided to write an essay comparing the most well-known portrayals of Dracula: Lugosi, Lee and Oldman. The only problem was that I’d never seen Lee’s Dracula in action. So, off the family trekked to Tower Records (do the kids today know what Tower Records was?), where we rented Horror of Dracula (1958).

No offense to Bela Lugosi, but this was some next level vampire action. Frank Langella, Louis Jourdan, Gary Oldman, they’d all brought interesting things to the role (I’m especially fond of Jourdan’s take), but not one of them had dominated the screen the way Lee did. There was no excess of melodrama to his line readings; he was direct, confident, intimidating without having to try.

Not that he had all that much dialogue, anyway. In fact, after his first few scenes, once he’s been revealed as a vampire, Dracula doesn’t speak again throughout the entire movie (he equally brilliant Peter Cushing gets most of the talking time as Dr. Van Helsing). Lee’s Dracula propels the narrative forward and affects every other character purely through his incredible physical presence. This was that horrifying figure who’d stared back at me from those books, animated at last and totally re-shaping my concept of a vampire. 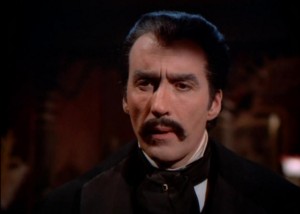 With that one movie, I became a devotee of Cushing and Lee. I rushed to track down every Hammer Dracula and Frankenstein movie I could. At the time, that meant scouring video stores and bootleg catalogues. Oh, the thrill of tracking down bootleg VHS tapes… with so much available at our fingertips these days, I’m afraid the joy of the hunt doesn’t occupy the same role in fandom that it did twenty years ago.

I got to see a 16mm print of Dracula Has Risen from the Grave (1968) screened at a museum of all places, along with an introductory lecture on the movie’s relationship to the Catholic/Protestant conflicts which are so important to British history. The was one of those special days that helped me learn to look past the surface of a text, to think critically when interpreting stories and images. It was an important moment. 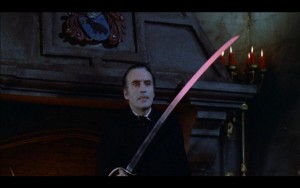 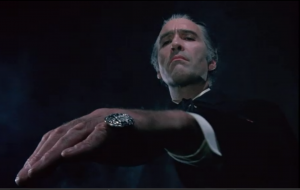 Lee played Dracula in 7 films for Hammer, and a few times for other studios. The movies were of… variable quality, but even in the worst of them (I’m tempted to give that distinction to The Satanic Rites of Dracula [1973]), Lee never gave anything but his fang-bearing, bloodshot all. No matter how bad the movie, when Lee was on screen it became great, because he was great – so great that nothing else mattered.

Lee played a variety of roles, sometimes the villain, sometimes the hero, sometimes more complex than those categories allow for. It would be shame for his legacy to be reduced to just one role. Fortunately, with more than 200 credits under his belt, that’s not really a danger. So I feel quite comfortable saying that to me, he’ll always be Dracula. 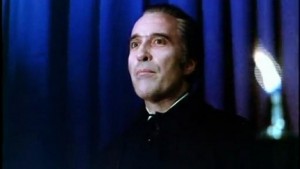 And, finally, salvaging what little he could of The Satanic Rites of Dracula (1973)

Hopefully the next time you visit The Blood Shed, it’ll be a happier day in horror land.  Meanwhile, hey, don’t forget to check out our Facebook page!