An Interview With Leonard, founder of Friday the 13th Records

Explore the darkest recesses of your mind with this spine-tingling self-titled release of Leonerdo the 13th! This ambient horror mixes soundscapes, synthesizers, guitars, and more to create a truly relentless atmosphere of unsettling horror. I had a chance to speak with Leonerdo about his debut release, Friday the 13th Records, his past projects, and more. Read on to hear his thoughts! And check out his ambient horror release while you read, I’ve embedded it below!

Hey Leonerdo. Thanks for taking the time to chat with me. To start, how about you give the readers some background on your past as a musician.
Hey, Thanks for having me. I started playing guitar when I was young. I  was in a New Jersey Hardcore band in high school that was on Back Ta’ Basics Records & Gut Punch Records. Put out a couple of 7″ records. After that, I started a band called Fading Sky with one of my best friends, Frank Rich on drums. A while after that, I ended up becoming friends with Tony Gonzalez and we eventually became what’s known as The Maniac Agenda. We are known for some work on the Metal Gear Rising soundtrack, as well as some cool production/sound design gigs along the way like working with Asking Alexandria. But, I think my favorite adventure while I was with The Maniac Agenda was when I got to do the guitar solo work on the band Starset‘s song
“Let It Die”, I love that song. There are so many amazing people we got to work with and meet it’s hard to name them all on here. But, big shout out to anyone that saw us at Camp Bisco & Gathering of The Vibes Fests! 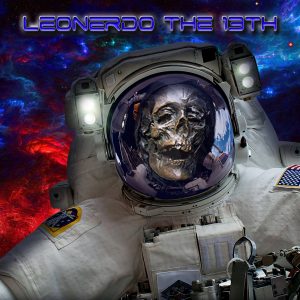 I saw you guys at both, I remember a certain safety break by the water with a few of us chilling as the sun rose. We both had sets that night! Was an awesome time. What are some of your musical influences for this new project, Leonerdo the 13th? The album is very unsettling, would probably fit great in some torture porn horror flicks!
Oh man…haha…that is a great compliment…thank you. To be honest…this project was a way for me to find the darkest regions of myself, grab them by the throat, and embrace
the shit out of that darkness. I have always been heavily into Horror and Sci-fi movies, but this project I think a lot of the influence came from stuff like “The Shining,” “A Nightmare
On Elm Street,” “Friday The 13th,” “A Clockwork Orange,” “Deathgasm,” “Suspiria,” “American Horror Story.”
As far as music…Goblin, Krzysztof  Komeda, Philip Glass , Brian Eno…Anything by Bruce Dickinson (vocalist of Iron Maiden.) Watch his movie he made about Crowley and the Moonchild! It’s called “Chemical Wedding.” And yeah…lots of Aleister Crowley books, and old ritual’s he did that were recorded…stuff like that. I also like Kenneth Grant’s work, and I’m a fan of Zeena Lavey Schreck and pretty much anything she has done. David Lynch, John Williams, and the people who did “The Shining” (Wendy Carlos, Rachel Elkind, Kryzsztof Penderecki, Gyorgi Ligeti, Bela Bartok) and a cult film from the 80’s called “Liquid Sky,” to name a few. 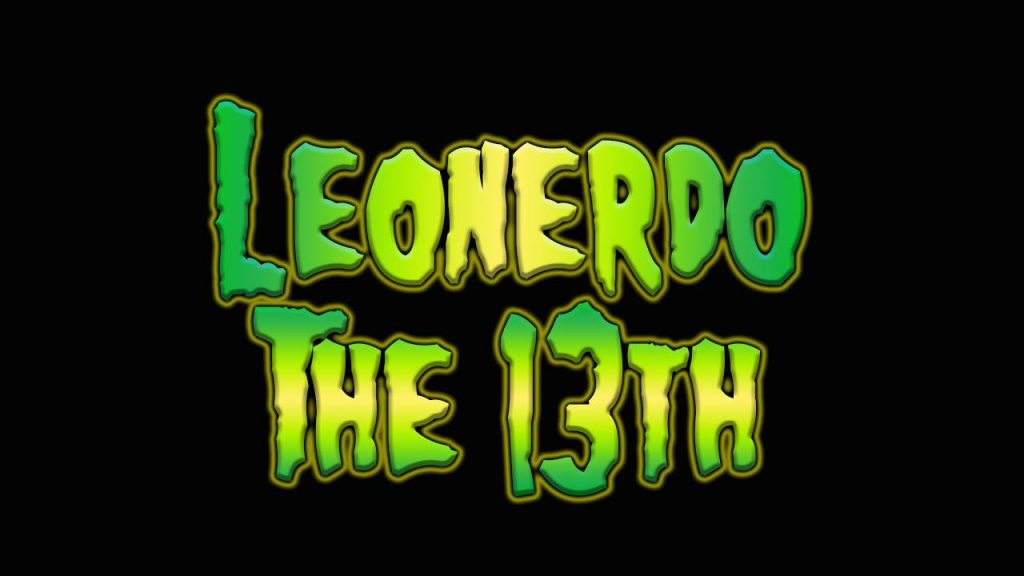 Name some of your favorite horror movies.

The Shining is still my favorite. I just saw it in the theater a couple of nights ago! It was amazing to see it on the big screen. I also like: Evil Dead, anything by Hitchcock, Halloween, HellRaiser,
ALL and every Friday The 13th and Nightmare on Elm Street’s , The Exorcist , The Blob , The Thing, Fright Night, Salem’s Lot, Deathgasm is probably my newest favorite. I’ve watched it many, many times. If you haven’t seen it, it’s on Netflix right now, and Deathwaltz Records just released the Vinyl soundtrack, limited through Mondo Records. Crazy metal soundtrack.
What can we expect in the future for Leonderdo the 13th?
I’m always writing and recording new stuff, so another Leonerdo album will be out for sure. But it will be a special release that comes out on my next birthday of 2017, which will actually fall
on a Friday The 13th! Yes, Ive planned this. To me, just like Witches and Magicians believe, I do all of my releases as rituals on specific dates/moons/equinox’s, etc. We do this for good reason.

You recently launched Friday the 13th Records. I know the backstory, but care to inform our viewers about the launch, the choice of name, and what to expect from the label in the future?
Chaos…you can trust that there will be chaos! No seriously though, I just started my own record label while releasing this album so I’m crazy busy in the best way. LOTS of new stuff
is on it’s way. The newest and most exciting thing in my world is this new album on Glow In The Dark/ Splatter Vinyl which is available for pre-order finally! Very soon, I will be revealing
some of the other music, artists, and bands that are releasing music on the label. There is something for everyone. Progressive Metal, Stoner/Doom, Experimental Electronic, Hip-Hop,
Psychedelic….you get the point. We cater to the THC minded folks, what can I say? The name, Friday The 13th Records, is actually pretty deep. I was born on Friday, October 13th…
This day is known as The Day of Death. The historical significance is relevant when you look into it, if your into the esoteric and ancient mystery teachings. Plus, I grew up loving the
Friday The 13th movies. 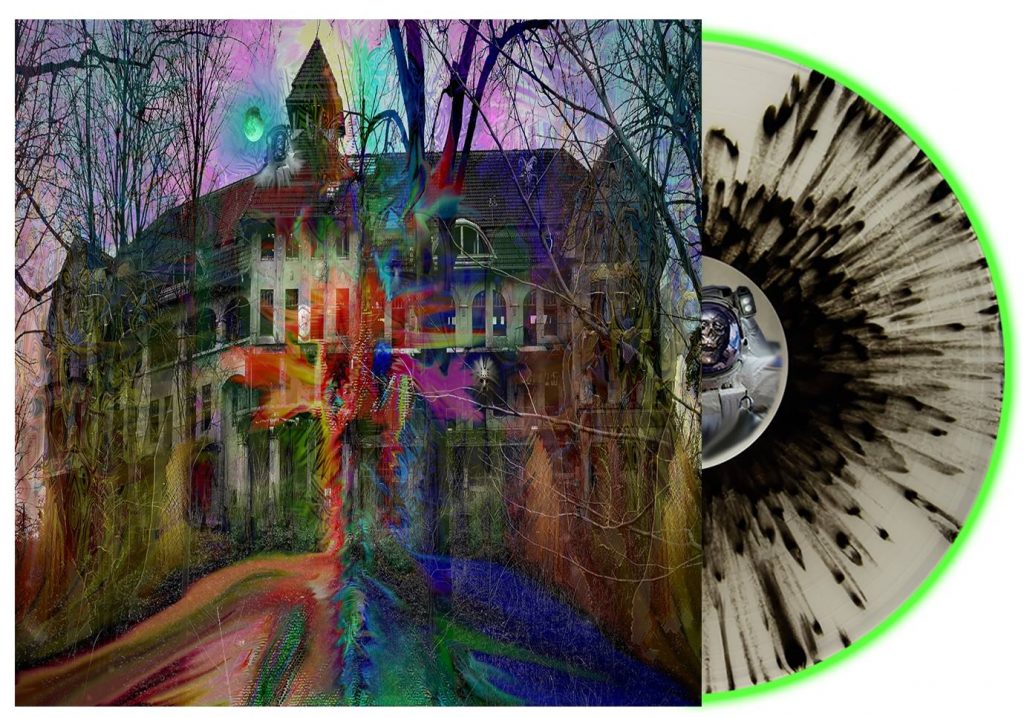 Where can people hear the album and where can they snag the vinyl?
Leonerdothe13th.bandcamp.com – You can download the album for free (pay what you want) AND you can pre-order the Glow In The Dark Vinyl there too! There are also some really cool
record stores that will be selling it too in the U.S. – And if anyone wants to reach me directly, you can email me at Leonerdothe13th@gmail.com with any questions, ideas, etc.
Thanks for chatting with me, Leonerdo. Always nice catching up with you, we gotta do some more collabs in the future! Any final statements you’d wish to make to part with the fans?
Thank you for having me, it’s always a blast to talk horror, records, and porn. Speaking of collabs, keep an eye out for some interesting ones in the near future! And always remember to Embrace The Darkness.

Remember, folks. You can pick up Leonerdo the 13th’s self-titled debut at “Name Your Own Price” on bandcamp! Vinyl pre-order now available as well! 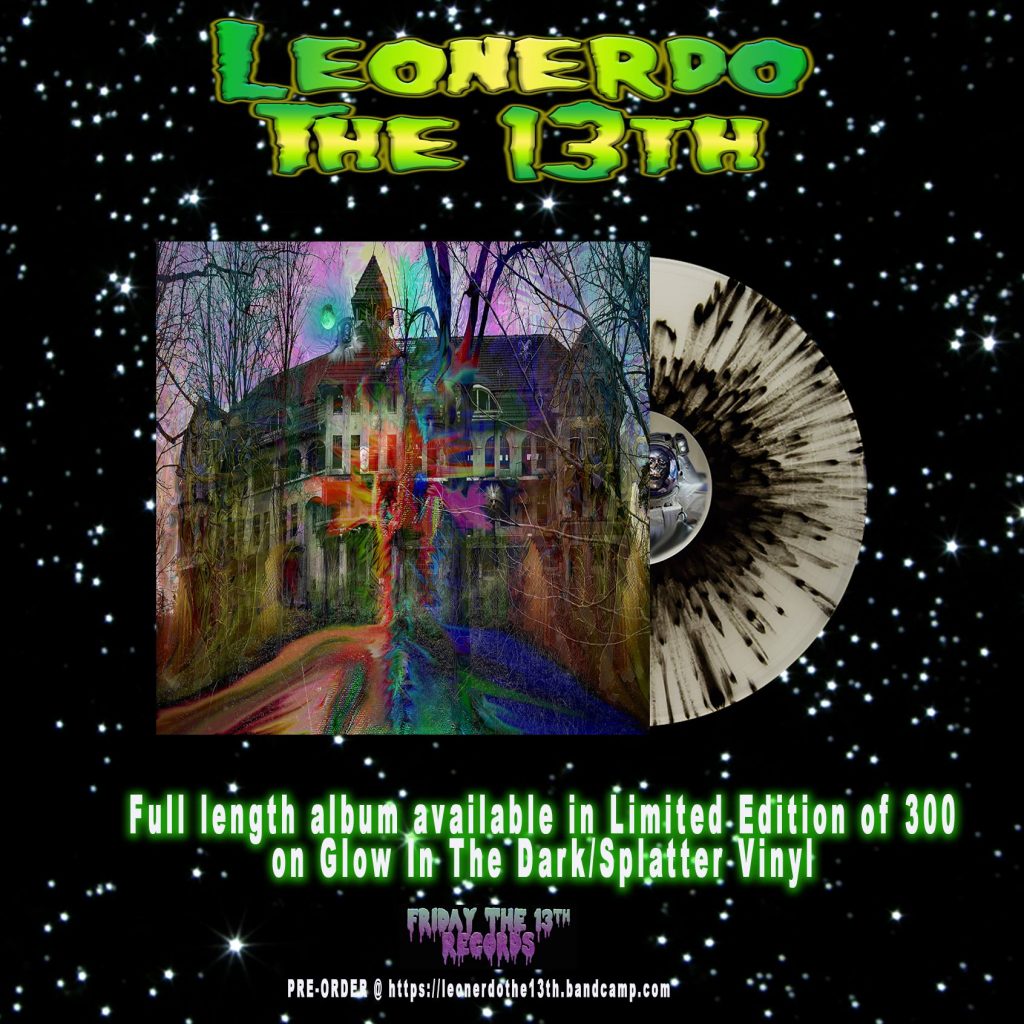