‘American Guinea Pig: The Song of Solomon’ is not for the faint of heart!

American Guinea Pig: The Song of Solomon, starring Scream Queen Jessica Cameron, truly lives up to the old adage that you can’t unsee some things!

A film that is absolutely not for the faint-of-heart, The Song of Solomon showcases crazy practical FX and heavy theology to bring us a hardcore horror film that will be hard to forget.

I met the star of this crazy film, Jessica Cameron, at the sneak peek screening of Bill Moseley’s Crepitus and she was kind enough to chat with me and pose for a photo. She has since introduced me to writer/director of The Song of Solomon Stephen Biro. 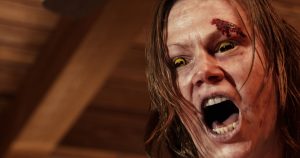 Along with the screener, Stephen shared with me: “The Song of Solomon is an outrageous film made for gorehounds by gorehounds. Hopefully, everyone enjoys it and watches it multiple times because that’s when the magic happens. It wasn’t supposed to be a cross between The Evil Dead and The Exorcist but it’s the closest comparison we have. It’s 100 percent all practical FX and real Exorcism rituals from the Catholic Church, so it’s a bit heavy theologically. The dialogue of the possessed girl (Jessica Cameron) does play into it a lot, so just keep an ear out for full enjoyment.”

Synopsis: Mary witnesses the brutal suicide of her father. His death unleashes the savage forces of demonic possession in his daughter. The End of Days is upon the world, famine, drought, looting, and chaos is ripping the world apart and the Catholic Church is trying to save an innocent soul from the ravages of satanic possession. Wave after wave of holy men are sent to confront the possessed but what is the Holy Church actually doing? The City on Seven Hills is working on the Second Coming of Christ but before He comes back – the Antichrist must rule for seven years. The Song of Solomon’s true nature is to unleash an evil the world has been waiting for since the beginning of time.

Stephen Biro is no stranger to underground horror. He loves to shock people with films that crash through extreme boundaries and shock even hardcore gore fans. I agree with his statement that The Song of Solomon is a cross between The Evil Dead and The Exorcist, but I would add – on steroids! I thought I’d seen pretty much as gory as it can get, but even I felt nauseous a few times during the film. 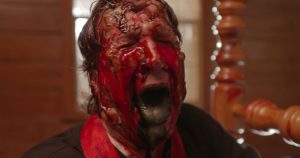 The Song of Solomon is the third film in the western relaunch of the infamous and gory American Guinea Pig series; films that were spawned from Asia’s most talented, unique and oh so twisted filmmakers. In the series, each film focuses on a different violent chapter in the lives of the seemingly doomed characters. Biro’s directorial debut Bouquet of Guts and Gore was considered by many critics to be one of the grossest genre efforts of all times. Audiences were shocked and sickened by the simple fact that it looked so realistic. The Song of Solomon follows firmly in its footsteps to present an Exorcism film that shows the priests seeming to do more harm than good. The Catholic Church was definitely in over its head, or are they part of the evil demonic plan? 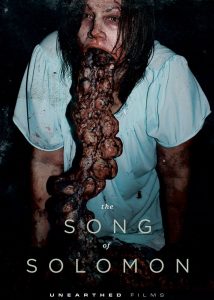 I wonder what it would have been like to see this in a theater? I heard about people having to leave or even fainting right in their seats. I believe it. The warm and cozy cabin setting was nothing like The Exorcist’s cold and clinical set. Yet this is somehow worse because the candlelight is deceiving, it makes you believe everything is safe, the warm light is somehow comforting and yet so quickly does the bloodletting begin. Not sure why that should have surprised me- Hell is a pretty damn hot place, right? As an SFX artist myself, I appreciated every bloody and gore-filled moment. The completely practical SFX by Marcus Koch and Jerami Cruise were incredible. The bar is set high for other super gore films.

Not being familiar with the Catholic Church, I was none the less impressed with the rituals, and theology buffs will be rewarded with what I’m told is real, correct exorcism ceremonies. The attempt to exorcise the demons out of Mary happens throughout the entire film. We leave the room from time to time- but the focus and film revolve around the exorcism.

So, we know it’s gross, super bloody, has some really unique deaths and great special effects, but what about the acting? Well right off the bat, kudos to Jessica Cameron! This had to be a physically difficult role, every scene she looks worse and worse! Everything looked disgustingly real and she put herself 100% into it. What an incredible performance! Part innocent little girl and part snarling evil intestine-eating demon, she owns every second that her character is on screen. The priests, played by David E. McMahon, Gene Palubicki, Jim Van Bebber and Scott Gabbey, all had their terrific moments too, for as long as they were allowed to live. The poor guys didn’t really have much of a chance against the Antichrist! 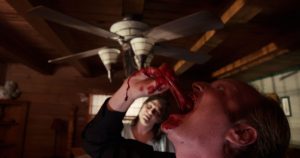 The Song of Solomon out-grossed The Exorcist as was promised with some heinous acts of violence, is as bloody as any of The Evil Dead films, brought us some shocking new looks to demonic possession, boasts real theology and has horrendous gore-filled practical effects that would be hard to top by any indie filmmaker. Stephen Biro makes no apologies for this film and any PTSD you may have afterward. The Song of Solomon is true horror at its most grotesque. This extreme underground horror film is one that you should only watch if this is your kind of film, but if it is- YOU HAVE TO SEE IT!!

For more information on The Song of Solomon from Unearthed Films, or get a copy for yourself go to: