An Interview with American Guinea Pig Star “Eigh8t The Chosen One”

The Guinea Pig series has had a controversial presence in the States for years now, with Charlie Sheen delivering a copy of the infamous pseudo-snuff film all the way back in 1991. As a lot of you guys know, Unearthed Films recently acquired the rights to makes new films in the infamous series, a set of American Guinea Pigs.  With the second film in the series, Bloodshock, coming out later this year, I thought it would be fun to look back at the first, Bouquet of Guts and Gore. 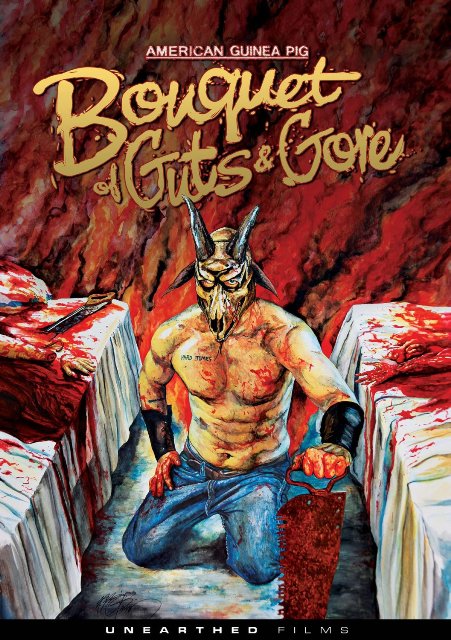 While it likely isn’t the kind of flower you’d give to your prom date, Bouquet is one hell of an effective experience. Brutal in ways lesser shock movies can only dream of, this film feels like taking a long shower in battery acid. Over an hour of nothing but torture, dismemberment, and blood on the grainiest film available, this is a movie all fans of gore need to see immediately.

And who better is there to talk with us about it than Eigh8t The Chosen One, the films Baphomet masked torturer, and one of the scariest dudes in recent memory. Eight8t was kind enough to sit down with The Blood Shed and answer a few questions about just what it’s like to star in one of the most infamous gore series ever shot.

The Blood Shed: Thanks for taking the time to speak with us Mr. Chosen One. I know you’re a busy man.

Eigh8t: No problem, more than happy to.

Shed: Can you tell us a little about yourself? What influenced you to become an actor, and in particular to star in gore movies?

Eigh8t: I wish I could tell you it was some kind of masterful plan but it was all by accident really. While doing my first role I fell in love with how challenging it was building the character. I didn’t know it was happening while doing it but after I realized how much I enjoyed the art of it.

Shed: While you’ve been in a number of pictures, you are perhaps most well known for playing the murderer in American Guinea Pig: Bouquet of Guts and Gore. How did you get into the mindset of such a vicious role?

Eigh8t: Well, to anyone who has read the script of American Guinea Pig you know what a monster it is. It’s just relentless non-stop torture. I kept reading that monster over & over. What Stephen (Biro, director/writer of Bouquet) had written was there but I built my own little story in my head fucked up enough to match “The Actor”. Plus It was months & months of walking around saying my lines & getting my movement down.  And I do not say that with a ego at all… I did it so much because I wasn’t taking the role for granted and I didn’t want to be the guy who dropped the ball. It was a mix of a lot of passion & drive as well as a little fear.

What I will tell you is this because you asked an amazing question. The voice I used was a unique discovery. I kept thinking about my dialogue in the film, which isn’t super heavy but I give a speech before the carnage starts. I started thinking about what could I do vocally, but I was afraid to watch any horror movies because I didn’t want to subconsciously steal anything, you know? I was afraid I might pick up someone else’s speech pattern or sound. So I thought music… who has a haunting voice I can draw inspiration from? Peter Steele from Type O Negative.

Shed: What was it like on set? Obviously the blood in Bouquet was stellar; was there a lot of standing around and waiting for the gore guys to do their thing?

Eigh8t: Honestly, I was in a different mindset so I can not speak for everyone on both locations. But I’m sure I could write a whole book about those three days. We had down time here & there but my down time was spent getting my pump back & lifting weights off in a corner or in another room (laughs). Oh & eating, Did a lot of that too!

Shed: Having starred in one, what is your opinion of gore films as a whole? Do you think they offer more than just to satiate an audience’s bloodlust? If so, what?

Eigh8t: Of course it offers more! I am not saying that just because I was in American Guinea Pig. I know these films are not for everyone… but I am a fan of splatter films & bloody movies. It’s the art of it man! Sometimes they can disturb you, sometimes they can just be gross, or some can just make you laugh your ass off! Just my opinion though.

Shed: What are some other films you are working on now, and where could Blood Shed readers see them in the future?

Eigh8t: Right now I am working on Crackbaby Billionaire. It has too many stars to name all of them but John Miller is directing it. I can promise you that you will see me like NEVER before in this film. I will also be working on Bigfoot Mob Boss from Cult Movie Mania. And plus one on the table I can’t name yet.

Shed: Well thank you for your time Eigh8t: Any closing words or plugs?

Eigh8t:  Thank you & I enjoyed it! And yes, Corey Brown’s debut album and the soundtrack for Crackbaby Billionaire is available for pre order on Amazon.com. It will be worldwide everywhere March 11th. 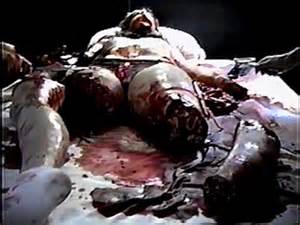 Interesting words from The Chosen One. Eigh8t himself was a hell of a good guy, and a pleasure to talk too; make sure all of you gore hounds go out there and help support his work. As for the American Guinea Pig series, Bouquet is available now, with Bloodshock releasing sometime later this year, and yet another film currently in production. This series has been some of the most grueling filmmaking to come out of the pseudo snuff genre in a while. Serious gore fans, you owe it to yourself to watch these movies; for everyone else, give it a go yourself if you think you have the stomach. And as always, stay tuned to The Blood Shed for all the quality horror news you can handle.

Jeff is a writer for The Blood Shed and eats, drinks, and bleeds horror. He’s also the President of Head On A Stick Productions, who you can follow on Twitter here. You can contact him at Headoasp@gmail.com.