Recently in New South Wales, Australia, millions of tiny spiders fell out of the sky. Residents were appalled to see the multitudes of arachnids, as well as strands of their webs, covering the area. 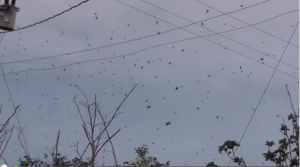 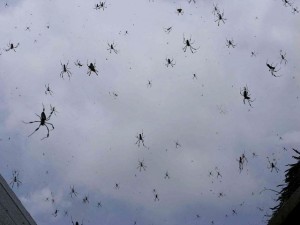 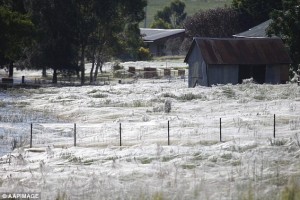 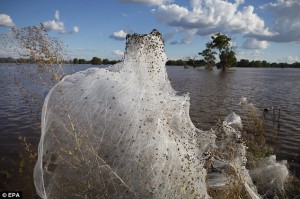 Scientists say this was an example of a normal spider migration behavior called ballooning, and it is something that they do quite often.

When spiders balloon, they point their butts at the sky and release a stream of silk. The silk catches wind currents and allows the spiders to float through the air. It is a common dispersal method to ensure that too many spiders don’t become packed into one area and exhaust its food resources. Ever see a tiny spider out of a 30th-floor window and wonder how it got there? Ballooning is the answer.

What is less common about the recent arachno-precipitation in Australia is that so many spiders landed in the same place at the same time. It is normal for spiders to migrate via ballooning in this region in late May, but unusual for so many to do so simultaneously. Researchers believe that an abrupt change in the weather pattern, or possibly a wind shift, caused this to occur.

That’s the official explanation, but I’ll still be on alert for rivers turning into blood, unexpected hordes of locusts, or the unexplainable sickening of livestock.