US Horror fans should devour this Japanese import while they can!

Where horror movies are concerned, there are those who swear by purely practical FX as others espouse the near limitless virtues of CGI, but the debate is hardly polarized. Aficionados like myself believe that each approach has its place, and that execution is key. Nothing beats practical FX when it comes to up-close, visceral horror. I’m also frequently impressed by CGI’s power to captivate, especially on a large scale; things and events so vast my mind doesn’t have a frame of reference: Natural disasters, spaceships, and Cloverfield-sized monsters, for example. That said, problems often arise when a director decides to use CGI FX exclusively; I can think of numerous examples where such an approach produced an uneven and unsatisfying final product. 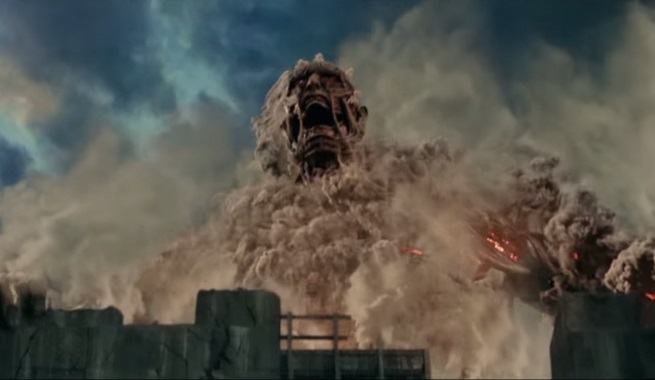 With Attack on Titan: Part 1, director Shinji Higuchi delivers a skillful mix of practical and computer generated FX, resulting in a brutal and thrilling movie experience horror fans can devour. First and foremost, AoT:1 (based on the bestselling Japanese manga/anime) is an epic action movie set in a post-apocalyptic universe that resembles our own. Vast when it needs to be, at the same time as detailed as the best examples of combat FX, it’s a movie that aims high and pulls no punches.

Some early reviews said this movie is boring, but that’s a dirty lie! It’s less than 10 minutes before Colossal arrives, character-building is done in concise vignettes, and technical details are revealed in quick flashbacks. Even dialog is scattered between extended jaw-dropping sequences, resplendent in both scope and devastation. In case you didn’t know, AoT:1 is Rated R—and it earns it! Those who found this movie boring, please see a Dr. immediately because you have ADHD.

As with every film adaptation, there’s the inevitable Elephant in the Room: How does it stack-up against its source material. For Attack on Titan purist hoping for a faithful adaptation of the manga or anime, I’ve got some bad news: This movie won’t make you happy. While the aesthetic is often a spot-on reimagining (especially when it comes to the hideous Titans), and it’s definitely the same story, differences are copious. As a horror journalist, it’s not my job to list perceived “inaccuracies” (Armin isn’t blonde, etc.), rather I’m expected to evaluate Attack on Titan based on its merits as a movie. If the goal is to create a high-octane entertainment juggernaut, Higuchi succeeds at almost every turn.

If you’re scared Attack on Titan is all eye-candy, don’t be; there’s plenty here for the thinking aficionado. The subtext is rich with complex themes like freedom and slavery, presenting a paranoid & authoritarian government that represses residents in the name of security. (Sound familiar?) There’s also a mind-bending enigma at the saga’s core: A shocking secret barely revealed by the film’s CGI-enhanced, practically-executed, awesome bloody cataclysmic climax.  Be prepared to enter the belly of the beast like you never imagined was possible!

Even if you usually avoid live-action adaptations of cartoons for fear of cheese, AoT:1 delivers enough gritty dystopia to please even discriminating nihilists. Here’s a world of illusion and manipulation, where the poor and disenfranchise are essentially forced into military service; a refugee crisis echoes the current Eastern European quagmire. Classism abounds and the air is rife with revolution.

If you live in America and you’re hoping to see AoT:1 on a big-ass movie screen (which, if you have the means, I suggest you do), you’d better get on it. If you didn’t catch it last night or today, your only other chance is Wednesday, October 7th. Part 2’s release will, likewise, be criminally limited, screening at select locations on October 20th, 22nd, and 27th exclusively. After that, the caliber of your experience may be limited by the size and definition of your TV screen.

While there’s no such thing as a perfect movie, Attack on Titan: Part 1 left me grinning and invigorated with no natural inclination to complain. Considering this film really is getting shafted in terms of its theatrical release, I suggest you make an effort to catch a screening if possible. You may even run into some cosplayers sporting Scout Regiment capes & uniforms like I did. Good times!

Have you seen Attack on Titan: Part 1 or are you planning to? Sound off in the Comments section!