Bound to be a Christmas horror classic, Await Further Instructions is a well-crafted, claustrophobic, dark Sci-Fi satire about family, sheep-like conformity and how addicted we are to the television.

Ahh, the holidays. Everything about Christmas looks so cheerful. Bright colors, jolly music, loving families, beautiful presents. But the holidays are not always merry for a lot of people. In fact, it can be a sad and depressing time. Point, in fact, the new Sci-Fi thriller from Dark Sky Films– Await Further Instructions. Most folks only have to deal with the forced family get together one day a year. (maybe twice if you do Thanksgiving) But the Milgram Family household is about to be trapped inside, with all the ugliness bubbling up like a geyser around them. 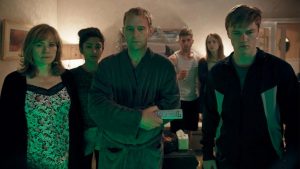 Synopsis: It’s Christmas Day and the Milgram family wake to find a mysterious black substance surrounding their house. Something monumental is clearly happening right outside their door, but what exactly – an industrial accident, a terrorist attack, nuclear war? Descending into terrified arguments, they turn on the television, desperate for any information. As the television exerts an ever more sinister grip, their paranoia escalates into bloody carnage.

Finally, after many years of not contacting his family, Nick (Sam Gittens) decides to bring his girlfriend Annji (Nerrja Naik) home for Christmas. Probably not one of his greatest ideas since he knew it would be awkward at best. His mom (Abigal Cruttenden) is excited, Dad (Grant Masters) is standoffish and Grampa, (David Bradley) well he’s is a total racist ass! Then there is Nick’s not-so-bright and pregnant sister, Kate (Holly Weston) and her equally moronic husband. (Kris Sadler) What a festive group!

After the first evening goes horribly wrong, due to the bigots in the house against Annji, she and Nick have decided to take-off early Christmas morning and just be together. Unfortunately, when they go to leave, they find that all the doors and windows are covered with a strange, unbreakable black substance, trapping them inside the house. All ties to the outside world have been cut. The only information they have is a simple message on the TV screen: ‘Stay Indoors and Await Further Instructions’. 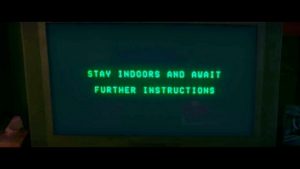 Thinking that this could be the government and that they should just follow the instructions, Nick’s dad Tony takes charge and does whatever the TV tells them to do. The messages they get are very disturbing, especially when they realize that they are being watched through the TV, almost as if it’s alive. Everything they are asked to do is terrible and the TV tests their ability to do what they are asked without question. Things go downhill fast and the carnage gets real!

One of the reasons that horror films are so valuable in our society, is that the horror genre holds up a mirror that allows us to see and analyze the seedier and darker side of humans. People treat each other so badly in the world at large and we need to look at this, understand the problem and stop it. Await Further Instructions does a great job is showing us what could happen if we blindly conform to what our parents, the media or others tell us to do, no matter how wrong it feels.

This film also takes an interesting look at our growing addiction to television and the internet. People will believe anything that’s put in front of them, and this needs to change too. Instead of thinking for ourselves, we seem to worship social media and follow along. That right there is scary all by itself. Are television, the internet, and social media our new Gods?

Written by Gavin Williams and directed by Johnny Kevorkian, Await Further Instructions is an intense and brutal psychological thriller that can really get under your skin. I found myself hooked from the very beginning; it’s a terrific film! I got a feeling of Twilight Zone: we need to learn from the story, it is a tale of warning. For trivia fans, there are also a few easter egg tidbits, that pay homage to other horror films.

We need to learn how to be better people, not follow anyone blindly and to get our butts off the couch and stop watching so damn much TV.  This is a perfect film to start conversations. Watch it and talk about it. What can we learn from Await Further Instructions?

Await Further Instructions is coming to Blu-ray and DVD on December 11, 2018