Fast Food Gets Nasty In Brooklyn

Some books you read, others you process, Bob Freville’s “Battering the Stem” you digest. This book is an achievement in both writing and genre. When most people start out writing, or in any art form, someone often offers them the sage like platitude of, “You got to learn the rules of writing, so you can break them.” This book is written by someone who, I think, learn the rules, then decided to break them, or is just one hell of a buck wild writer. 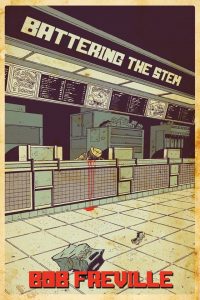 The plot is simple, a bunch of counter jockeys in Brooklyn’s most disgusting fast food joint find themselves under siege from a not-so-harmless-not-actually-homeless man. The way Freville deals with tension, logic, and characters is real. In every piece of shit movie or poorly written book, the writer strands the characters with typical bullshit. Before the invention of the cell phone, this was a matter of a flat tire or “we’re lost,” after cell phones became a thing, stranding tactics were elevated to “my cell phone battery died,” or bad reception.
What do you do when you’re in the “right” and you call the cops, they show up, and say “So what? We got bigger problems and don’t bother us again?” Or “Fuck it, we don’t care.” From experience, I can say, it’s terrifying.
While the book is loosely about a greasy dive under siege, the read is about the full experience. The characters are real people, none of which I could label as heroes. This book is a series of down notes, played on an out of tune piano, but the music is played by virtuoso hands making a dirty tune and the filth envelopes you. Freville sets you up with characters that are imperfect and seedy. The businessman struggling to keep his dream alive who is hiding a vast collection of child porn in his desk, a junkie trying to kick, hood rats working the register, and the neighborhood chock full of homeless, junkies, and thugs.
The book is more than its plot, or even its characters, which I feel the author has lived as to some degree, but the book works as a full concept. Where most books take a formulaic approach to plot and structure, and even the components that put the book into its genre, such as a horror writer making sure there is gore on page 10. “Battering the Stem” is complete, head banging with a bloody nose and missing teeth to the punk rock song in its head and doesn’t need to give you anything more or less than is written. 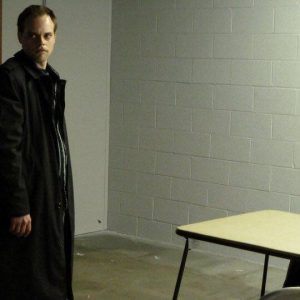 While the book is published by Bizarro Pulp Press, it is not what I think typically falls into the bizarro genre. There are no kittens becoming president and fighting armies of zombies while the ghost of Abraham Lincoln flies a UFO to Mars to discover the reason behind the mysterious plague. There is gore, there is tension, and there are moments that are surreal, but none that you couldn’t actually live through. The only thing you’ll find in the book is a road map to what should be America’s next great literary voice.
The siege of Clayvon’s King Prawn Chicken N’ Biscuits is a brush stroke in a painting and “Battering the Stem” is a masterpiece that I think time will thaw out for what it is. For writers starting out, hearing the bullshit advice of “learn the rules so you can break them,” this is a book of “don’t bother, be a writer.”