I am so excited to share the official trailer for the upcoming horror thriller “Bird Box”, arriving on Netflix and select theaters on December 21st.

Synopsis: When a mysterious force decimates the world’s population, only one thing is certain: if you see it, you take your life. Facing the unknown, Malorie finds love, hope and a new beginning only for it to unravel. Now she must flee with her two children down a treacherous river to the one place left that may offer sanctuary. But to survive, they’ll have to undertake the perilous two-day journey blindfolded. 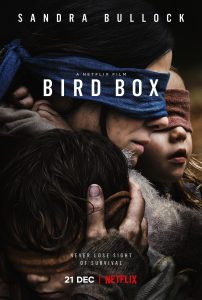 In this new horror thriller, she’s immersed in an apocalyptic nightmare in which people are seeing their worst fears and killing themselves once they do. it reminds me somewhat of  A Quiet Place, but instead of being quiet, you have to make sure you can’t see. With fear and monsters, it always comes down to the fact that our minds can conjure up worse things than are possible in this world. We are our own worst enemies.

In the trailer, you can see Bullock alone in the woods, hunting for her children but wearing a blindfold to avoid seeing whatever might force her to take her own life. “Under no circumstance are you allowed to take off your blindfold,” Bullock says to her children as they ring a bell to alert her to the “creatures.”

Bird Box is directed by the Danish director Susanne Bier and written by Arrival’s Eric Heisserer. Look for it on Netflix and in theaters on December 21st, 2018.