2 Chicks in Chains On the Lam From the Prison From Hell! 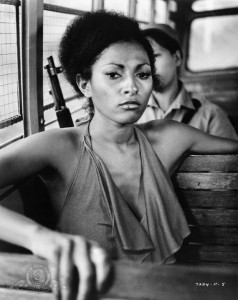 Black Mama, White Mama starts off as a “Women in Prison film,” with some soapy playfulness in the shower by the hot inmates with one female guard watching and giving herself a handy, but it soon evolves into a tale of survival as Lee (Grier) and Karen (Markov) escape the prison with the aid of Karen’s revolutionaries in a hail of gunfire. Karen needs to meet up with her revolutionary group and Lee wants to escape the island altogether with the money she stole from her scumbag boyfriend, who just so happens to be the biggest drug dealer on the island. They don’t like each other, but they are shackled and chained together at the wrist, so they must work together if they are to survive.

While this is considered a “Pam Grier movie,” the star of the show is definitely Sid Haig whose character, Ruben, is obsessed with cowboy culture and even louder cowboy clothes that even Marty McFly would have refused in Back to the Future III. He’s loud, obnoxious, and pretty much an over the top characterization of Sid himself. In the special feature, “Sid’s Filipino Adventure,” he discusses his great working relationship and onscreen chemistry with Pam Grier and how it was to shoot in the Philippines. He mentions that when he saw the wardrobe, he knew what kind of character he was going to play.

The film was produced and distributed by American International in 1973, which was the golden age of shooting cheap and 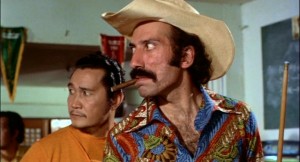 quick films in the lush jungles of Philippines, so the 1080p transfer makes the color pop to no end; The greens are lush, the browns are earthy, and the orange blood is, well, extra orange. Even Sid’s garish clothing seems to have an almost electric-ethereal-neon quality. The original mono audio is presented is presented with flawless clarity.

This is another solid Arrow Video release that deserves to be on the shelves of blaxploitation fans, women in prison fans, Coreman fans, and American International fans everywhere. 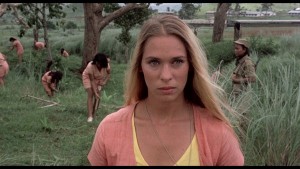 Before her iconic turn in Coffy, Pam Grier starred alongside Margaret Markov in a grindhouse spin on Stanley Kramer’s The Defiant Ones, fusing the Women in Prison film with the emerging Blaxploitation movement for a riotous romp of bullets, babes and blood! Lee (Grier), a tough prostitute and Karen (Markov), a revolutionary, are admitted to a tough women’s prison where almost immediately (after some playful showering that prefigures Porky’s) they clash. Packed off to a maximum security prison, their transport is ambushed by Karen’s guerrilla friends and the two escape into the Filipino jungle. Chained together and with differing escape plans their clash intensifies as Lee wants to retrieve a stash of stolen cash to get her off the island and Karen wants to re-join her revolutionary group. Escape isn’t easy as they come up against a series of obstacles including a corrupt cop, a bounty hunter, a sadistic Drug Lord and guerrillas who threaten to turn everything upside down. Chock full of girl fights, gun battles, nudity and humour, Black Mama White 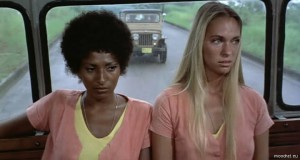 Mama, which was also known as Women in Chains and Hot, Hard and Mean, lives up to all its titles as well as featuring a brilliant Sid Haig (Spider Baby, House of 1000 Corpses) as a cowboy bounty hunter and Lynn Borden (Frogs, Dirty Mary Crazy Larry) as a lesbian guard from a script co-written by Jonathan Demme (Caged Heat) and a score sampled by Quentin Tarantino for Kill Bill.