Blumhouse’s ‘Truth or Dare’ Preys On Your Deepest Darkest Secrets

"The game is real! Wherever you go, whatever you do, it will find you!"

A harmless game of Truth of Dare among friends turns deadly….

Truth or Dare is the newest film from Blumhouse and has received mixed reviews. Certainly not the bloodiest horror film out there, so if gore keeps you away from horror, this might be the film for you! The truth for me is that I haven’t gotten to see it yet- but Miranda Kuhl over at Hollywood News Source did and shared her review with us. She liked it a lot, and no matter what anyone else thinks, I dare you to see it! Check out The Blood-Shed’s Truth or Dare Giveaway too! Click Here

Blumhouse’s Truth or Dare Review- Hollywood News Source
Truth or Dare is a film that prays on your deepest darkest secrets. Imagine the worst thing you’ve ever done, or the darkest thought you’ve ever had – the spirit in Truth or Dare seeks out to expose exactly that. To imagine myself in the shoes of the actors in the film is quite terrifying, for that exact reason. It also takes a game that’s traditionally (albeit taboo) played by young children and puts a deadly twist on it. What starts out as an innocent game evolves until there’s virtually no out and becomes deadly for all players. What’s worse is sometimes it’s not even the characters’ actions that lead to their demise, but the actions of those innocently involved in the dare they get. 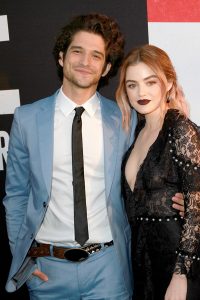 The film centered around a love triangle, as a lot of films do, but the writers fought hard to not let the actions of those in the triangle become cliché or predictable. It definitely showed in the execution, and this is something I can definitely appreciate. Though a truth was revealed that had major consequences, I found the way the three handled it to be very mature and realistic given the insane circumstances they were under. They could have gone a different direction that would have felt more juvenile or stereotypical, but they kept the focus on the horror aspect of the film. Ultimately, what you’re going to care about in that moment is your survival, and so many horror films deviate from this, it was refreshing to see this film keep the character’s focus on the game and trying to defeat it.

The pacing of the film was superb. Pretty immediately, things escalate to a deadly and heightened level. And audiences will be at the edge of their seats waiting for the next person’s turn and what crazy secret they will have to admit or what insane dare they will be given. Not much time passes from one turn to the next and this set the stage for the perfect consistency you want in a horror film. The performances by the actors were also top notch. The casting of Lucy Hale and Tyler Posey will certainly resonate largely with the teen/ young adult audience, and the chemistry between them alongside Violett Beane made for a powerful trio. Lucy Hale in particular did a fantastic job with her portrayal of the “good girl” thrust into the most impossible of circumstances. She has such profound facial expressions (I think it’s the eyes!) that really captivates viewers into feeling as if they’re in the film themselves. This is just what I want in a movie going experience.

I highly recommend giving Truth or Dare a watch if you’re a fan of horror, particularly the thriller/psychological kind. This is not a bloody/ gore filled film, so if you’re one that gets squeamish at these things, this film is pretty safe. Truth or Dare hits theaters on Friday, April 13th!

Thanks Miranda! Truth or Dare hit the theaters on Friday, April 13th.

Don’t forget that here at The Blood-Shed we are having a Truth or Dare Giveaway. Find out HERE how to win a cool prize package!