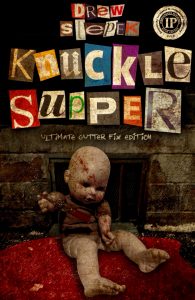 Knuckle Supper: Ultimate Gutter Fix Edition, is the predecessor novel to it’s upcoming sequel, Knuckle Balled. The highly acclaimed genre piece is penned by Drew Stepek (current Creative Director at AwesomenessTV) and was sent to me about a month ago. So that’s basically how I’m going to start this review, up-front, in your face, blunt.

To begin: First page in to the 244 page gorefest, a murder is in action! But here’s the twist, the victim…is a guy pimping out a 12 year old little girl. The 12 year old prostitute is introduced as “Bait” and is a recurring character in the Knuckle’ installment. The character’s back story consists of being a runaway, running away from a life of being molested by her stepfather while her mother turns a blind-eye. The character reveals she turned to the streets to become a full-fledged prostitute with a scum-bag pimp to match. Whose the pimp you ask? The dude being murdered. The character [Bait] is later, semi-saved from this fate [of being a prostitute] by our title-character “RJ Reynolds”, whom takes the troubled pre-teen in and unintentionally grows a liking and fatherly bond to her.

RJ is the murderer, the blood-drinker. The character throughout the novel whom mutilates his victims and uses their blood with a combination of heroin to satiate himself. The eating pattern of this character, though shared as well with those alike him, makes this tale [pinned against other films in the horror genre] all the more different. Rather than straight blood, the element of mixed-in heroin, makes the novel all the more original, in this reporter’s opinion.

Knuckle Supper’ also made me shudder is disgust…

The Drew Stepek second installment shrived to shed light on child prostitution/rape, even going the extra mile in describing in graphic detail of title character Bait’s experience. The tale, which in truth tragically does happen, was disgusting to read. Disgusting. Utterly disgusting.

Why was the subject matter of child prostitution and rape included? And why was heroin a mixed-in element to the blood? Well, I asked the author…

Drew Stepek: Difficult question. Great question. Everything I write, whether it be a novel, a short story or a poem all deal with the common themes of abuse and addiction. That said, it does come from somewhere. I spent some time in the hospital for bulimia in college and (as you can imagine), I was the only guy there. Well, it completely changed the way that I looked at the world… more precisely, the way I looked at girls and women. Almost all of them had been sexually abused in one way or another and it was a hard pill for me to swallow. It was really brutal.  You can read about all that in my first book, Godless, which is more of a semi-autographical book than a typical horror story.  Anyway, it became important for me to use my stories as a way to shine a spotlight on this fucked up thing that happens every day. These kids don’t have any voices. It’s pretty much a one way ticket to death. They runaway. They are forced into addiction and prostitution. They die. When I was writing Knuckle Supper (the first book in the series), I wanted to use horror and violence as a way to get child exploitation to the people who probably don’t know that much about it. That’s why my screenwriting partner (yes, this series will be coming to the screen) introduced me to Children of the Night. They are a great charity and they REALLY need help. They get these kids off the street, give them a place to live and get them educated. It’s RAD! https://www.childrenofthenight.org/ In the first two books of the Knuckle series, I have focused on single characters (Bait and Pinball) but in the third book, I will dive more into the bigger picture of child trafficking.

TB-S: What made you choose heroin as a way to satiate RJ and his alike?

DS: Another great question. I didn’t do it because opioids are on everyone’s mind lately when they think about addiction. So, the simple explanation, once again, goes back to me and my experiences. I could never write for RJ if I didn’t understand what he is going through, as he struggles with his own issues. On top of that, the story needs an arc beyond just being blood and gore (even though there is tons of that). RJ needs to struggle with something, because it forces the character’s hand and it also drives the narrative. I want the readers to be able to look into his mind and take the journey with him. That’s why I created The Gooch to act as the devil on his shoulder. We shouldn’t excuse RJ for stumbling but since we have courtside seats to his failures, we can understand. Everyone has made bad decisions in life. That said, it’s a great way to add a sense of humanity to a supernatural creature. There are no two ways about it… heroin is fucked up

As for my final verdict…

Though hellbent on making you want to dispose of certain pages out of utter disgust, Knuckle: Supper’ was finally an original gore-centric story. With Twilight references and total self-awareness of the Vampire sub-genre, Knuckle Supper’ engrossed me and I’m sure the avid horror fan in a never ending spew of gore –described piece by piece–, carnage –again piece by piece– and drama.

Be on the look out for the Knuckle series’ screen debut!