Forward: The Blood-Shed is a horror news & entertainment site, not a music site. Occasionally, we do discuss bands that rock a horror-inspired mantra and/or aesthetic; we also discuss musicians who have made inroads in the horror arena, like Rob Zombie, Slash, and Gene Simmons. But if I wanted to write an op-ed about, oh, let’s say a rapper with an inflated ego, there wouldn’t really be a place for it here. Late last week, however, I caught wind of an item that combined my love of horror with my disdain for a certain self-proclaimed genius. Finally! An appropriate opening to slam my least favorite megalomaniac: Kanye West! 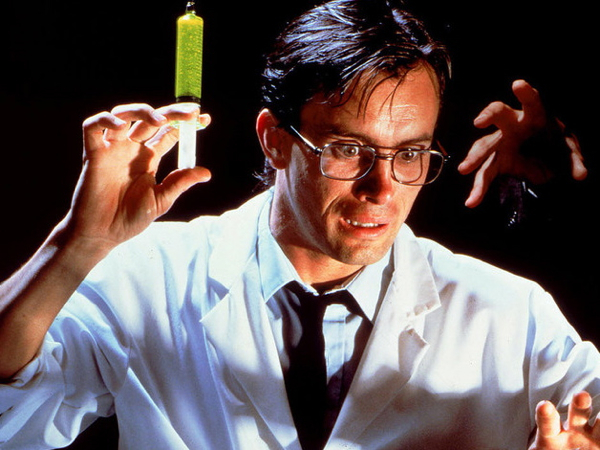 Stuart Gordon’s Re-Animator (1985), based on the story by H.P. Lovecraft, is a horror classic and essential viewing.

Last week, fans celebrated what would have been H.P. Lovecraft’s 125th birthday with a plethora of articles including: Biographical insights, discussions on his continued influence in horror, and artistic compositions inspired by the late author’s work. But there was one bit of news that made me to a double take: Apparently, writer Joshua Chaplinsky has rewritten and remolded Lovecraft’s seminal Frankenstonia saga Herbert West – Reanimator with a new mad protagonist. It’s called Kanye West – Reanimator.

[Lovecraft does a somersault in his grave.]

Chaplinsky explains the inspirations and motivations behind his, er, creation:

“It started out as an experiment, where every time the name Herbert and/or West came up, I replaced it with Kanye. Then, I went through and changed certain details of the story to reflect Kanye’s biography. Finally, I discovered what the piece was really about, and began turning it into a bizarre mix of Lovecraftian horror and hip-hop history. It puts a whole new spin on both the Kanye persona and Lovecraft’s original story.

In it, Kanye attempts to reanimate a moribund hip-hop scene, only to come to the conclusion that his music is so powerful, it should be used to reanimate the dead. And who better to reanimate than those two legendary titans gone before their time—Biggie and Tupac? Hilarity and carnage ensue.”

Okay, I can’t deny it sounds like some funny shit, and as a fan of horror and classic hip-hop, I can imagine a potentially delightful mash-up. Will I read it? If someone gifted me a copy I probably would. The only thing that irks me (and causes Lovecraft’s ghost to moan) is that I oppose anything that adds to the unwarranted glorification of Kanye—or pretty much anything that acknowledges that fool’s existence (beyond this particular article, or course). Without descending into a rant, I will say that I can’t stand that boob, and the sooner he fades into obscurity, the better. While I understand that Chaplinsky has created a work of parody and satire, I just know Kanye will use its creation as proof of his relevance. 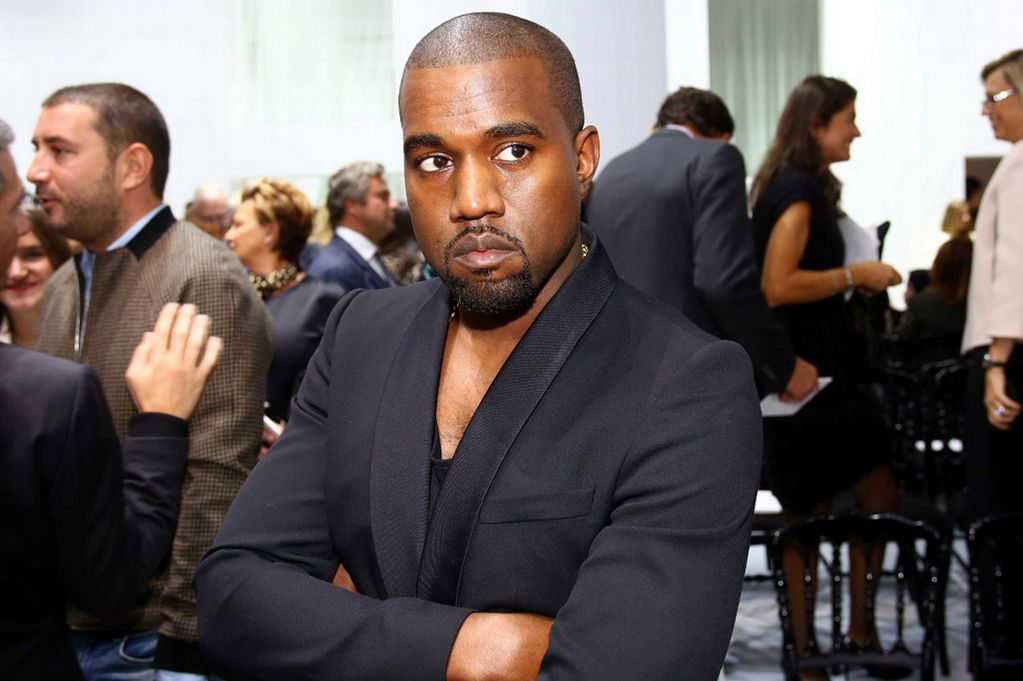 On the other hand… If Yeezy is a man of his word, he probably won’t even read it. Remember this infamous Kanye quote:

“Sometimes people write novels and they just be so wordy and so self-absorbed. I am not a fan of books. I would never want a book’s autograph. I am a proud non-reader of books.”

While I love this missive for revealing what a horse’s ass Mr. Kim Kardashian really is, it just reinforces my belief that the man doesn’t deserve to be immortalized in literature—even funny, light-hearted literature. Does this mean I oppose the release of Kanye West – Reanimator? Of course not! I’m still just reeling for the absurdity of it all—and it doesn’t take much to send me into an anti-Kanye tirade. (More power to you, Joshua!)

Hopefully, in the story, Pac & Biggie will bust a cap in his ass, thereby bringing hip-hop back to its glory days. I’d definitely buy that!

Kanye West – Reanimator is being published by Yolo House and will be released on September 1st. The undeniably awesome retro cover art was designed by Matthew Revert and features the work of Dyer Wilk. 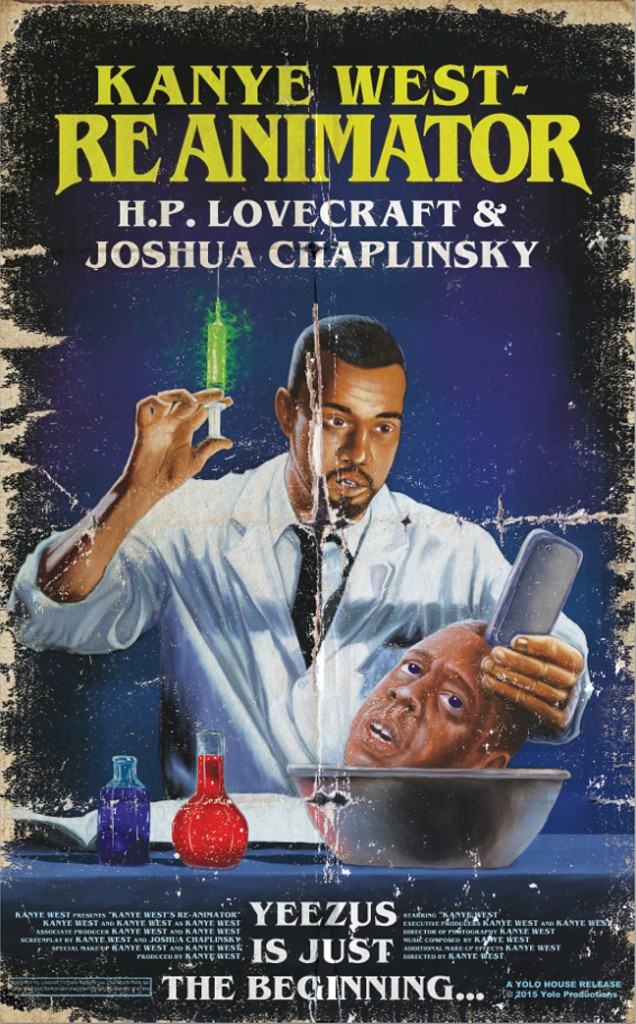 In order to take full advantage of this rare opportunity to rail against Yeezy, and as proof that his statement about reading isn’t a rare example of stupidity, I’ve scoured the internet for Kanye quotes that best exemplify what an idiot this self-proclaimed “voice of a generation” really is. Enjoy! 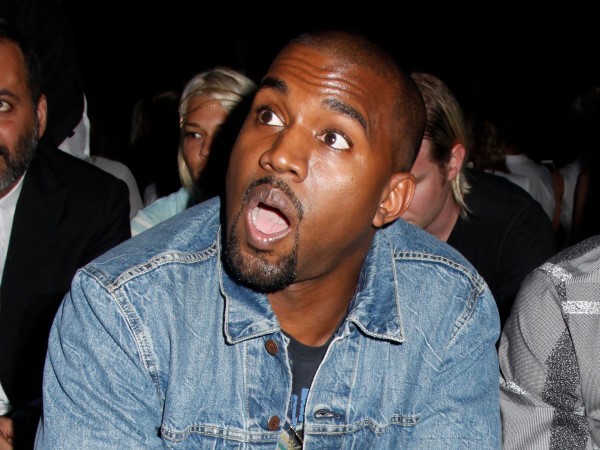 “Taylor Swift beat Beyoncé at the Grammys? Beyoncé be dancing in heels and shit.”   Yeah, because that’s what the Grammys is all about: Dancing.

“I have to dress Kim everyday so she doesn’t embarrass me.”   Because she embarrasses him? Okay, Kim isn’t exactly known for wise decision making, but Kanye is, by far, the bigger media disaster.

“I’m doing pretty good as far as geniuses go … I’m like a machine. I’m a robot. You cannot offend a robot … I’m going down as a legend, whether or not you like me or not. I am the new Jim Morrison. I am the new Kurt Cobain.”   You, Mr. West, are no Jim Morrison. You are no Kurt Cobain. If you’re a robot, does that mean you have an “Off” switch, because, if so…

“[AIDS is] a man-made disease. [It was] placed in Africa just like crack was placed in the black community to break-up the Black Panthers.”   Kanye West: Pseudo-scientist, history revisionist, and paranoid conspiracy theorist. It’s hard to be that much stupid in two short sentences.

“I walk through the hotel and I walk down the street and people look at me like I’m fucking insane, like I’m Hitler. One day the light will shine through, and one day people will understand everything I ever did.”   Okay, Kanye certainly isn’t Hitler, but he certainly is fucking crazy! On that “day” when the ‘light” shines through, I just won’t get out of bed—ever. 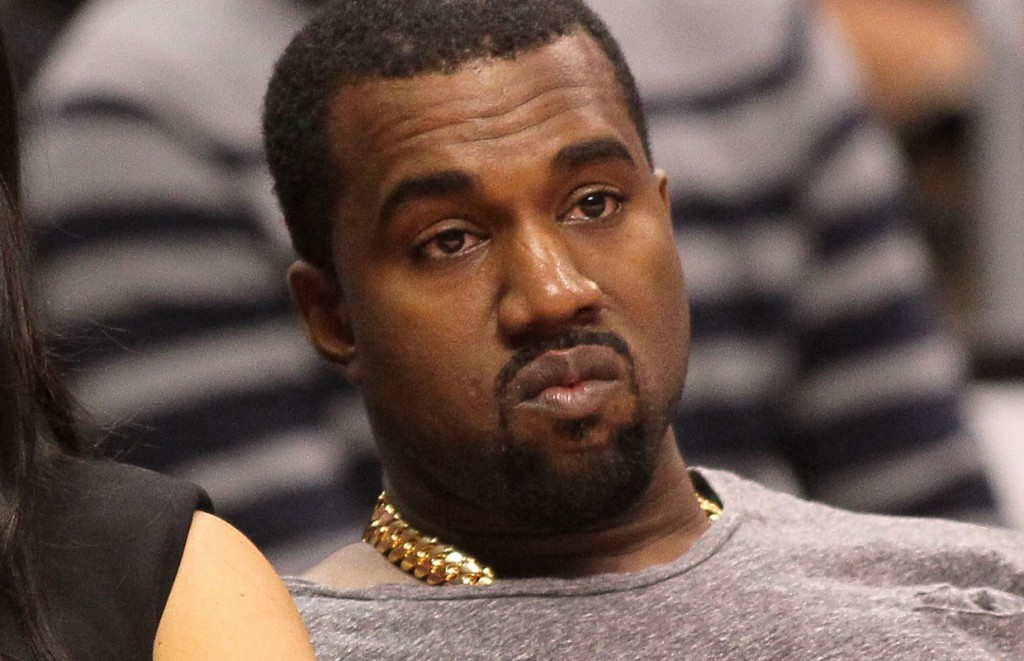 “My greatest pain in life is that I will never be able to see myself perform live.”  Not the death of his mother or the abandonment of his father, but never being able to see himself perform as a member of the audience. Wow.

“I’m like a tree. I feed the branches of the people.”  I’m just going to let that one speak for itself.

“You may be talented, but you’re not Kanye West.”   Thank God!

“I am Warhol. I am the No. 1 most impactful artist of our generation. I am Shakespeare in the flesh.”   So much “Nope!”

“I liberate minds with my music. That’s more important than liberating a few people from apartheid or whatever.”   That’s right Kanye, you’re way more of a hero than some slacker like Nelson Mandela. Where’s your statue?

I could go on. Believe me there’s no shortage of quotes that prove Kanye is a fool of monumental proportions. I hardly need to rip into the guy—he shows what an idiot he is every time he opens his mouth! I’m sure he’ll have to plenty say when Chaplinsky’s book is released; I imagine something like:

“I’m so famous, people be re-writing books about me. It’s like, they wish I was part of the past, because the world was so empty before I arrived. They know that stories be boring if they don’t feature a strong, passionate genius. Soon, they’ll be re-writing the Bible to put me in there. I’ll be kickin’ with Jesus. I’ll be helping God create the Universe; with my help, it won’t take no seven days!”

What do you think about Kanye West – Reanimator? Doers it sound like something you’d actually read? Sound off in the Comments section!