Atmospheric and infused with a heavy dose of despair, Bryan Bertino’s The Dark and the Wicked examines the horrors of isolation, loneliness, and bereavement. 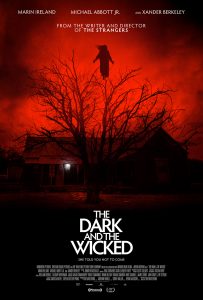 Synopsis: Two siblings venture out to their remote family farm, where their father is slowly dying, and their mother is unraveling from grief. Something else is happening, though. There is a darkness behind the sorrow, and an evil slowly poisoning the soil.

Most of us have lost a loved one. When it’s an illness that lingers on for a long time the burden can be devastating. Louise (Marin Ireland) and Michael (Michael Abbott Jr.) have returned home to their family farm to watch their father die. Their mother Virginia, (Julie Oliver-Touchstone) is falling apart and has her own demons to deal with. It doesn’t take long before the siblings figure out there is something dark and sinister in this house; something that will destroy them all.

The year 2020 has almost been like a slow-motion death in the family. The feeling of being trapped in our own homes, the loss of jobs and normal activities, or not being able to simply see our friends, has been overwhelming. We have no control over what is to come in this new world of COVID and this film brings out those same feelings of dread with a dark vengeance. Our whole world is infected, and no one knows how we will be able to escape.

Because the dread of what is to come in their reality is so relatable, their anguish and pain so palatable, it is impossible not to be sucked directly into the film and feel exactly what Louise and Michael do.

Everything about this film is eerie and beautifully done. Stellar acting from everyone involved, (with Julie Oliver-Touchstone a standout as the mother) an incredible script, a chilling soundtrack, and some of the most haunting cinematography ever. There was something lurking just out of frame wherever you looked. The interesting part was the disconcerting feeling that some sort of evil was taking over everyone around them. Or was it just a figment of their imagination caused by their terrible grief?

One of my favorite lines is from the nurse that helped take care of their father. “There are things in this world, horrible things, wicked, and they come for whoever they want.” The wicked arrives in copious amounts in this film and consumes everything in its path.

This is not a fun film. The Dark and the Wicked is grim, off-putting, and claustrophobic, yet I couldn’t take my eyes off it. I was drawn into Bryan Bertino’s web, like a moth to a flame. Two of his prior films, The Strangers and The Monster are favorites of mine and are equally as chilling and oppressive.

The only downside to an otherwise perfect film was the rather abrupt ending, which leaves some interpretation to the audience. Despite that and some animal mutilations, this is still going on my list of favorite horror films from 2020.

The Dark and the Wicked will be in Theaters, On Demand and Digital HD on November 6, 2020 from Shudder and RLJE Films

All photos courtesy of RLJE Films/Shudder