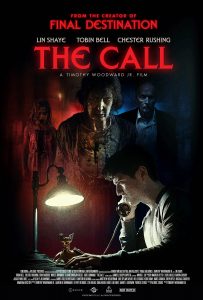 From the producer of Final Destination, Lin Shaye and Tobin Bell star in a terrifying tale of supernatural revenge. Despite having a disappointing finale, Timothy Woodward Jr.’s The Call is an entertaining film with stellar acting, wonderful cinematography, and outstanding SFX.

I have always been fascinated by the idea of people placing items in a casket with a deceased person. Is it because you think it will be appreciated in the afterlife, help them not to be afraid, or that they might need coins to gain passage across the River Styx? The answer to this is addressed in The Call, and I don’t think I’d want to be the person on the other end of this telephone conversation!

Official Synopsis: Years after a tragic accident, a group of small-town friends must survive the night in the home of a sinister couple. One by one, their worst nightmares quickly become reality as they enter the realm of THE CALL. Four Friends. One Phone Call. 60 Seconds. Stay Alive. 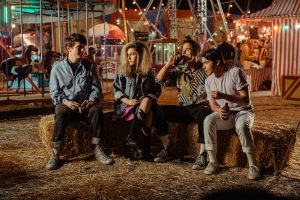 The film starts out following Chris, (Chester Rushing) a new kid in town with, of course, a dimwit mother at home. Right from the beginning, Chris gets in with the wrong crowd. On his first day of school, he meets Tonya (Erin Sanders) who quickly introduces him to her other friends, brothers Zack (Mike Manning) and Brett. (Sloane Morgan Siegal)

The three of them tell him about their favorite pastime, harassing an old lady who they feel is responsible for Tonya’s little sister Laura’s murder a few years back. The seemingly nice old lady ran a daycare that Laura attended, and even though there was no evidence, everyone believed that she killed the little girl. These kids decided long ago they were never going to let her get away with murder, and tormenting her became a way of life.

With Tonya as the ringleader, the teens explain to Chris that it’s a tradition for them to do crappy things to Edith Cranston (Lin Shaye) and invite him to join in on the “fun”. At the house, they throw bricks and rocks, breaking windows, and terrorizing the occupants. Their prank seems to backfire when a very creepy and red-eyed Edith comes out to confront them, telling them they don’t scare her, as she orders them off her property.

Sadly we find out that Edith is not as strong as she seems, during a very touching scene with her and husband Edward. (Tobin Bell) She seems to have depression or dementia and is very heavily brought down by the vandalism and hatred the kids have been directing at her all these years. Little do we know that this prank was the last straw and Edith, who everyone suspects is a witch, was plotting some serious revenge of her own; and then takes her own life. 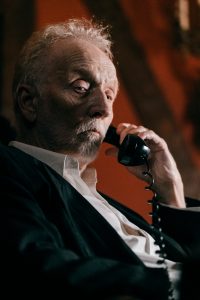 Soon after, the four teens are invited back to the home by a devastated Edward Cranston who tells them that Edith left them 100k each. All they have to do is call a number and stay on the phone for one minute. Sounds easy enough, but if Edith was indeed in possession of supernatural powers, whatever she has in mind for these teens, is not going to be fun. They all agree and go to the phone as directed, one by one talking to Edith on the phone. She was buried with a telephone you see and has a message for each of them.

At first, the story seems like straight forward revenge material, but this unique film stands out in many ways. 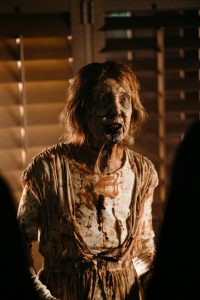 First off- OMG- Lin Shaye and Tobin Bell! Just seeing them acting together was wonderful and I hung on their every word. They were so perfect for their roles and I have adored both for years, so I was not disappointed.

Also, worth mentioning is the fact that there wasn’t anyone in the film that didn’t do a great job with their character. One of the hardest things about watching horror films (or any film actually) is at times some actors are so much better, or worse, then the others and it really stands out. Not so in The Call. Everyone pulled their weight acting-wise and when each had their separate moments, they all did fantastically.

Set in 1987, (I suspect because the use of a rotary phone becomes the other central character) the costuming and hair was a character all its own.  But what stood out to me the most was the Giallo-Esque visual style. Using amazing color palettes, we are led from nightmare to nightmare through the dark and painful backstories of all four of our teens. The cool design of the Cranston’s house, and the wonderful colors, really made this a beautiful film to watch.

I felt the heartbreak Edith felt and tried to feel some pity for the teens as we saw all of their deepest darkest secrets. Chris should not have really been a part of this, since he didn’t even live in the town when Tonya’s sister was killed. But that being said, he had his own dark past, so somehow he belonged there as much as any of them did.

My only real problem was an ambiguous ending. I guess it’s up to the audience whether we feel justice has been served. And that is OK, although of course, I always want that big WTF surprise finale!

Overall I liked The Call a lot and feel it’s worth your time to check it out!