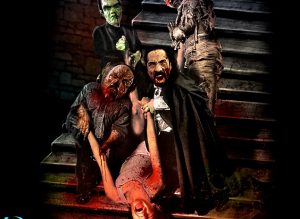 Fullmoon founder, producer, and director Charles Band (Puppet Master) has his 1997 monster classic THE CREEPS (a.k.a DEFORMED MONSTERS), coming to BLU-Ray this February.

From the press release:
Undersized, Undead and Angry.

From Full Moon founder, producer and director Charles Band, comes 1997’s THE CREEPS (aka DEFORMED MONSTERS), one of the studios most beloved and requested titles. Originally filmed and exhibited in 3D, this new Blu-ray is culled from the original negative and presented in a stunning anamorphic, 2D HD 1080p transfer, all the better to appreciate Adolfo (Stuart Gordon’s PIT AND THE PENDULUM) Bartoli’s rich 35mm cinematography and Gabe (FROM BEYOND, BASKET CASE 2) Bartalos’ amazing practical make-up FX.

Filled with humor, horror, wit, style, sleaze and silliness, THE CREEPS also offers one of legendary diminutive actor Phil (TROLL, LAND OF THE DEAD) Fondacaro’s greatest roles as Count Dracula, one of the most effective – and underrated – portrayals of the vampire in horror film history.

THE CREEPS is available on Blu-ray on February 21. Special features include original Full Moon trailers and a vintage THE CREEPS Videozone behind-the-scenes featurette. 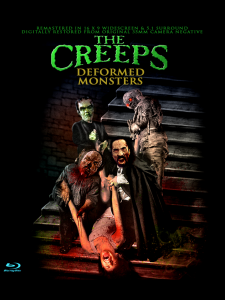